Extracting the 3D coordinates of a moving object from a video

Take a look at these two pictures, which are stills from a video which demonstrates magnus effect in football:

I want to extract the coordinates of this ball in 3D space from this video. These are the steps I intend to use:

These 3 independent coordinates could be used to calculate and plot the path of this ball, i.e., if this procedure was correct, which it isn't.

I'm confident that the first step is correct. The second step yields incorrect results(about half of the expected value). The third step also looks correct to me.

How do I fix the second step? (and any mistake in the other two steps, if there's any)

It's possible to use the method of second step to calculate the elevation as well, but it won't be very accurate since the camera is about 30 cm above ground and is aimed about 3-4 degrees above the horizon.

Maybe we could calculate the position of ball relative to the direction of the camera (instead of the ground) and try to translate it once it's done.

If you are looking for geometric accuracy, your approach is quite vague and possibly not completely accurate. I also have some doubts about your initial assumptions.

Let's say indeed, the ball's diameter is $22$ cm and the distance, along the straight line on the ground, connecting the camera's position to the place where the ball touches the ground, is $100$ cm. From what I am seeing on the first photo, the camera is not $30$ cm above ground. Otherwise it would be looking at the ball (which is $22$ cm in diameter) from above (because $22 < 30$), while in fact, we see that the camera is looking at it a bit from below. More precisely, from what I am seeing, the camera's lower edge is placed almost on the ground and the camera is slightly tilted upwards. So I am going to assume that.

Geometrically the situation is more complex than you assume, because the ball, being originally a sphere, projects onto the photo as an ellipse. I seem to be measuring the height of the ball in the first photo at something like $3.7$ cm or so, while the horizontal width seems to be something like $3.65$ cm or so. However, I am going to make a simplification, otherwise things are much more complex. I am going to assume that when we are making our calculations, the 3D ball can be represented by a disk of diameter $22$ cm always facing the camera fully, i.e. the plane of the disk representing the ball is parallel to the screen $s$. I repeat, this is not completely true, this is more of an estimate. Consequently, the results you are going to get are reasonable (I hope :) ) estimates. Intuitively, it seems to me that this approximation leads to a very small error.

First of all, for the most standard camera models, the geometric representation of a camera is a pair, consisting of a point $O$ (point of observation) and a screen (a plane $s$) not passing through $O$. Let $O_s$ be the orthogonal projection of $O$ onto $s$.

Part 1. By knowing the initial position of the ball and teh camera on photo 1 and by measuring some lengths on the photo, you can deduce the location of $O_s$ and the distance $d=|OO_s|$.

Part 1, Step 1. Fix the necessary coordinate systems on the photo and in three dimensions. According to my measurements, the frames of the first and the second photo are the same: identical rectangles with horizontal width $= 7.1$ cm and vertical height $= 14.3$ cm. This also allows me to assume that the photos have not been cropped. Consequently, since I believe that most cameras' screens are probably designed so that the projection $O_s$ of $O$ onto the screen coincides with the geometric center of the screen's rectangle $s$, point $O_s$ should be the intersection point of the diagonals of $s$.

Part 1, Step 3. Carry out measurements and preliminary constructions on photo 1. Let $A$ be the midpoint of the lower edge of the photos and $B$ be the midpoint of the upper edge of the photos. Then line $AB \, || \, L\vec{h} \, || \, O_s\vec{w}$ and thus $O_s$ is the midpoint of $AB$ (as well as $O_s$ is the intersection point of the diagonals of the photos). My measurements show (more or less) that the image of the ball on photo 1 is symmetric with respect to $AB$. Denote by $D$ the point where the actual ball touches the ground. By my simplifying assumption I spoke about earlier, the 3D ball is interpreted as a flat disk of diameter $22$ cm whose plane is parallel to $s$. Then, denote by $U$ this disk's diametrically opposite point of $D$. Thus $|DU| = 22$ cm and $|AD| = 100$ cm. See the figure I have added below. 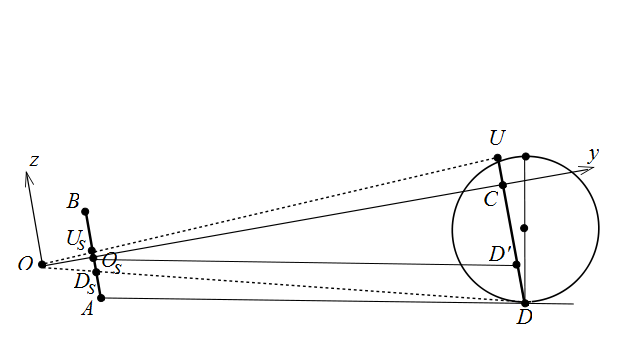 Then, if $D_s = s \cap OD$ and $U_s = s \cap OU$, then $D_s$ and $U_S$ are respectively the lowest and the highest intersection points of the ball's image with the vertical line $AB$ on the screen $s$. Thus, we are in the situation of the figure above.

For future reference, let us denote by $Q$ the 3D center of the real ball in the case of photo 2.

There are a couple of possible errors associated with step 2. For instance, the formula for the angle of elevation actually gives the tangent of the angle, not the angle per se, so it would be accurate for small angles only. But this error should be insignificant and could be easily corrected by changing the formula.

Another possible source of error in step 2 could be due to the elevation of the camera.

As a result of such placement of the camera, the estimated elevation angle could be greater than the actual elevation angle. The angles, $\theta '$ and $\theta$, are shown on the diagram below.

Even if the camera was properly aligned with the ball, the estimated angle would not be quite accurate, due to the $1$ meter offset between the ball and the camera, but the error here would not be significant.

with the initial distance you can calculate $R'$, and then $R$ for any distance, using the formula $R=SR'/S'$. S is the arc, but is a reasonable approximation to the ball's projection, but you can make it more precise if you want 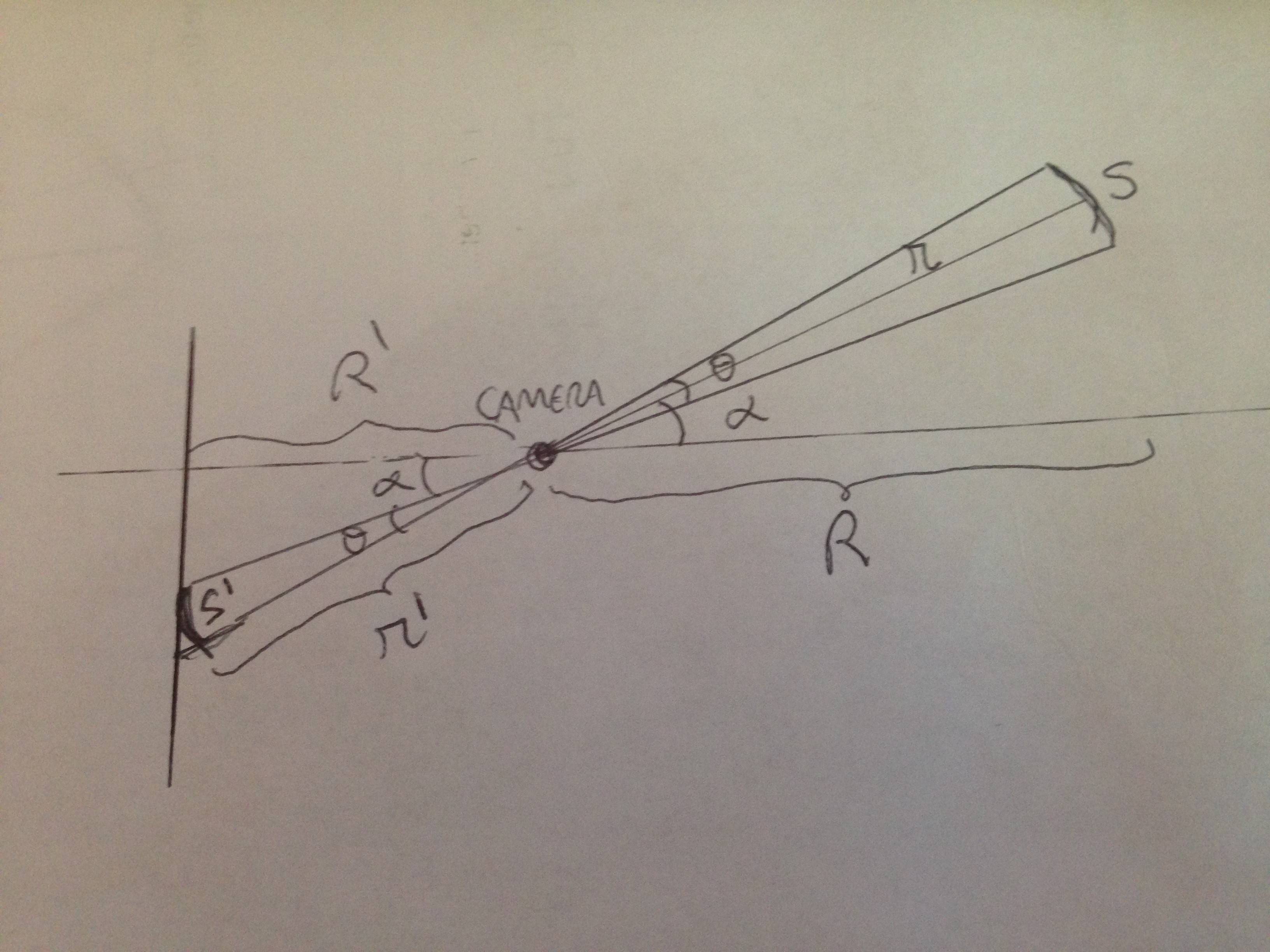 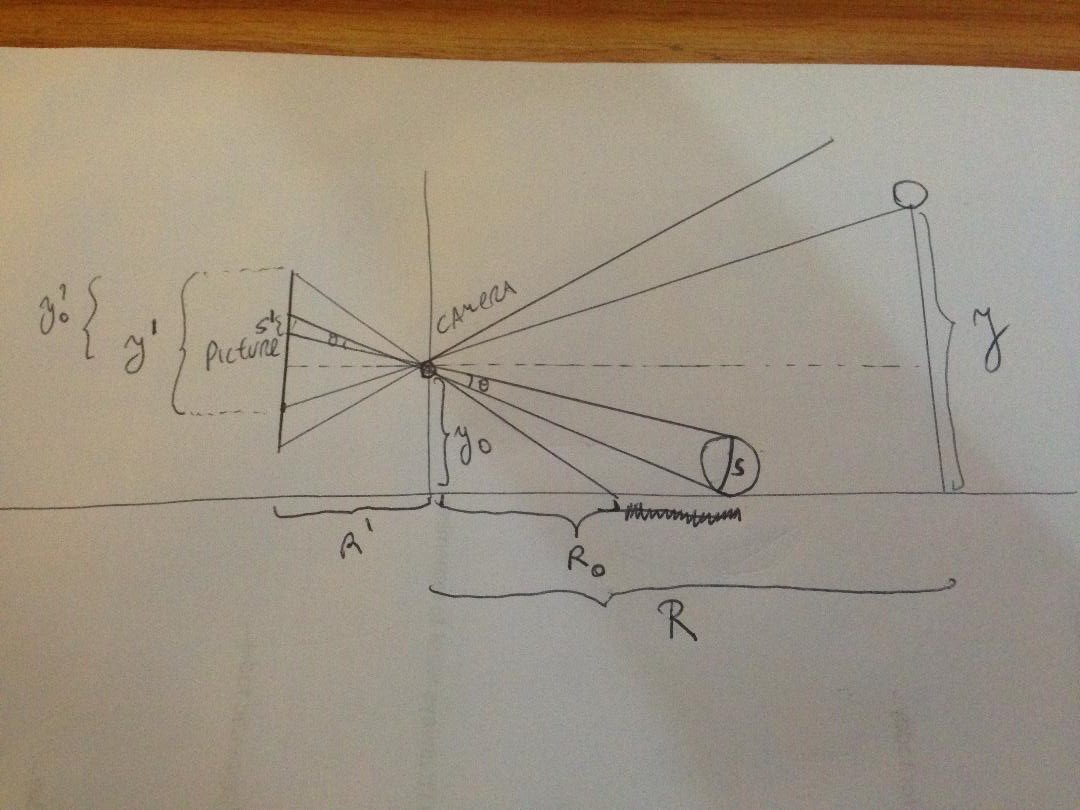 Not the answer you're looking for? Browse other questions tagged kinematics coordinate-systems projectile geometry software or ask your own question.

0
Calculate launch angle of object moving away from view

0
Is spherical coordinates enough to calculate the exact position of a point with rotations included?
0
$x$-coordinate of the ball when it's velocity is perpendicular to projection velocity
1
How to calculate the horizon line of a satellite?
1
Do rotating non-circular projectiles also experience Magnus lift?
1
Conversion of satellite coordinates from ITRF to J2000
0
Trajectories of a thrown object (with bumps considered)