I would like to know the physical meaning of the Legendre transformation, if there is any? I've used it in thermodynamics and classical mechanics and it seemed only a change of coordinates?

In (1D) classical mechanics, for example: if we have a Lagrangian $L(q,\dot{q}[,t])$, why can we define a variable

and expect to be able to construct a new function (the Hamiltonian) $$H(q,p[,t]) = p\dot{q}-L(q,\dot{q}[,t])$$ that behaves well? What's the relationship between both functions?

Let's look at the Lagrangian and Hamiltonian as a guiding example. I'll keep it fairly abstract/general, but the notation of Lagrangian/Hamiltonian can help make things more concrete and clearer.

So what do we need for a Legendre transformation?

Well, first of all we need two variables $v$, $p$ that are single-valued functions of each other. Another way to put this is that $p$ must be a monotone function of $v$ and vice versa. Figure 1 shows an example of such a function. 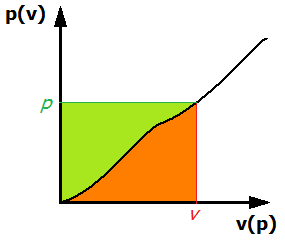 Figure 1. Example of a single-valued relation between $v$ and $p$.

In our example of classical mechanics, the functions we can construct for our two variables $v$ and $p$ are the Lagrangian $L(q,v)$ and the Hamiltonian $H(q,p)$.$^1$ They satisfy (by definition) the differential relations

Why does it work?

Indeed, why can we construct such functions? Take another look at figure 1. The way the graph is set up, it looks like a graph of $p$ as a function of $v$. So if we integrate this function between $0$ and some value $v$ (shown on the graph), the answer we get is the orange area under the curve. This integral is our first function! Indeed, if we return to the notation of our classical example (I'm going to leave out the $q$ dependence from now on):

Now if we consider the curve in Figure 1 to be $v$ as a function of $p$ (rotate the graph around if that makes it clearer to you), we can make a similar reasoning. This time we integrate between $0$ and $p$ where $p$ has been chosen to correspond to our earlier $v$.$^2$ This integral is our second function; so in terms of our 1D classical example:

You may have noticed that we've described a rectangle with the integrals (and therefore the two functions $L$ and $H$). This rectangle has a total surface of $p\cdot v$. But we've also calculated its surface in two parts: the green and the orange. The sum of both must therefore be equal to $pv$. This yields the Legendre transformation

How does a Legendre transformation work in practice?

$^1$ These are also functions of $q$, but that's not important. They could be functions of any number of distinct variables, though their list of variables will obviously be the same except for $v$ and $p$. Indeed, the Legendre transform doesn't change any of the other dependencies. If this is not clear now, it should become so throughout the rest of this explanation.

$^2$ Note that this is where the single-valuedness of the relation between $v$ and $p$ is required. If $v(p)$ was a parabola for example, then there would be ambiguity about which $p$ corresponds to the $v$ we used.

I find the convex-analysis interpretation of the Legendre transform to be the most enlightening.

A supporting hyperplane of a region is the closest possible oriented hyperplane to that region, among all hyperplanes with a given normal, such that all points in that region reside on the outside of the hyperplane. 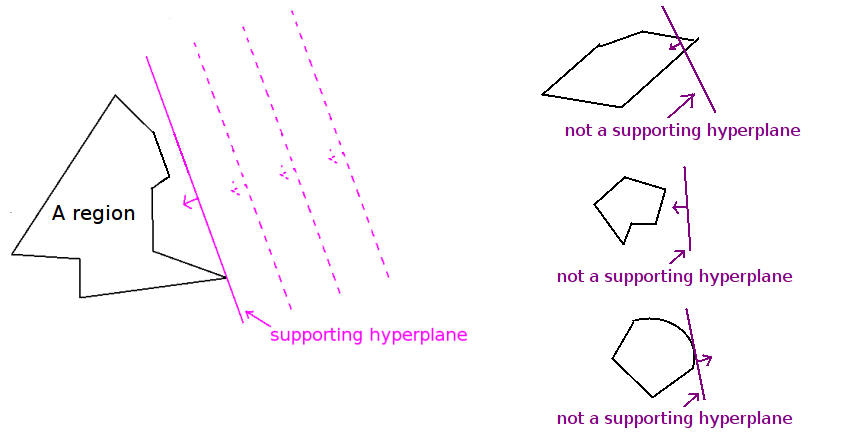 A closed convex set is uniquely determined by its supporting hyperplanes. 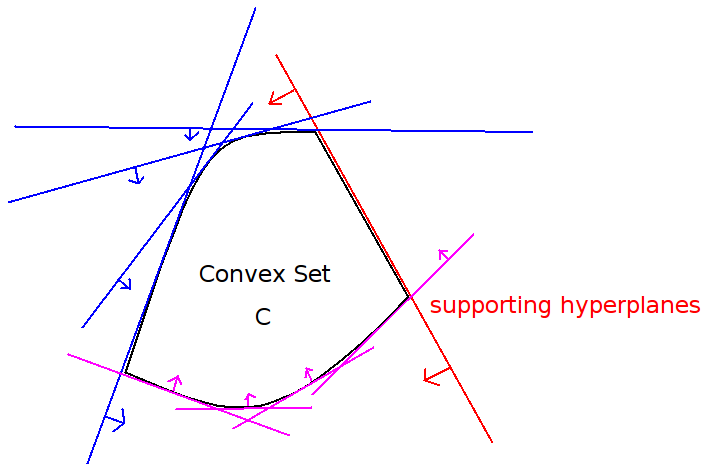 Why? No supporting hyperplane can "cut into" the set that it supports, and for each point outside the set, there exists a hyperplane that separates it from the set.

A closed convex function is uniquely determined by its lower supporting hyperplanes. 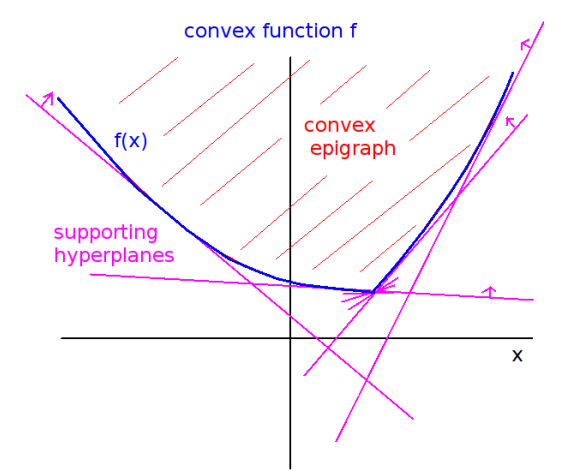 The Legendre transform, $f^*$, is an encoding of a function $f$'s supporting hyperplanes. 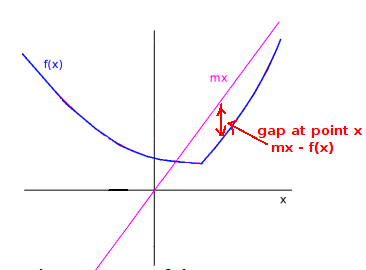 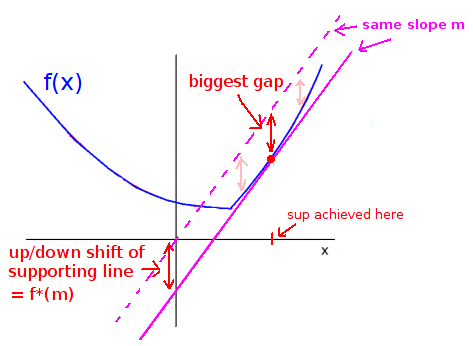 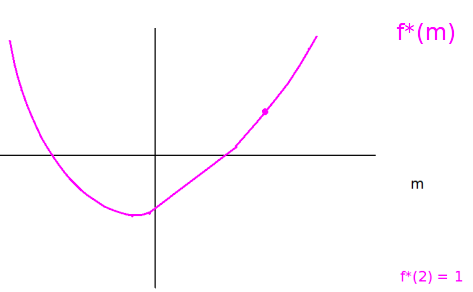 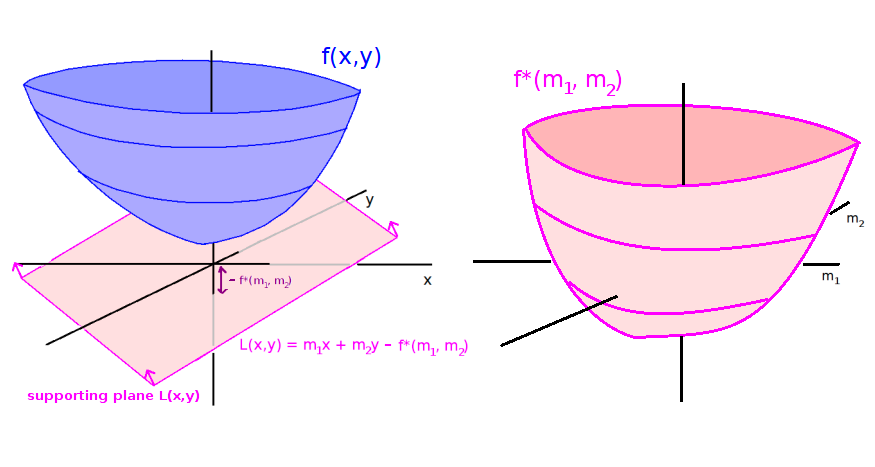 Here are some other links that discuss this convex analysis perspective of the Legendre transform:

As an aside, this intuition also extendes to infinite dimensions. That is, $f:X \rightarrow \mathbb{R}$, where $X$ is a Banach space. There the Legendre transform is $$f^*(\phi) := (\phi(x) - f(x)),$$ where $\phi$ is a linear functional. The idea of a hyperplane is less clear, but one might think of $\text{ker}(\phi) + b$ as a generalization of a hyperplane offset by height $b$ from the origin.

In theoretical physics, the basic or defining mathematical properties of the Legendre transformation are used to switch between one form of the energy - or "potential", as the generalized energies are called in thermodynamics - to another.

In thermodynamics, the number of applications and "types of switches" is even higher. You may go from energy to enthalpy or Helmholtz free energy or Gibbs free energy by Legendre-transforming with respect to various variables. The transform goes back and forth. As the Wikipedia example explains, there are other useful variables that you may Legendre-transform with respect to, including the charge and voltage.

There are already some nice answers regarding intuitive interpretations of the Legendre transform. What I want to contribute here, is a more physical reason/motivation for why they appear. I.e., instead of focusing on their physical interpretation, I will focus on the physical requirements that uniquely define Legendre transforms. This explains why you would inevitably end up inventing them, even if you had never heard of them before.

Variational principles are fundamental to physics. Legendre transforms naturally arise when requiring that variational principles carry over when changing variables; in fact, they turn out to be the unique solution to this physical requirement. I will illustrate this in the thermodynamic context. (A main conceptual difference from the other explanations on this page, is that according to this view, it is important that our function also depends on other variables in order to naturally arive at Legendre transforms!)

One important instance of a variational principle is the principle of minimum energy: a closed system with a fixed entropy will minimize its energy (note that 'closed' means that there is no mass transfer, but energy transfer is allowed!). This can be derived from the second law of thermodynamics; for a derivation, see here. To state this more precisely: if we denote our internal energy $U(S,X)$ where $S$ is the entropy and $X$ is some macrosopic variable that can thermalize (i.e., it is not fixed; e.g., a density profile, or the position of a sliding partition), then in equilibrium, we have $$ \boxed{ \left. \frac{\mathrm dU(S,X)}{\mathrm dX} \right|_{S} = 0 } \quad \textrm{(for the equilibrium value $X= X_\textrm{eq}$).} $$ (I will be suppressing other thermodynamic variables that might be held fixed, such as volume.) Here I am following the notational convention that the bar indicates what one is holding fixed when taking the derivative.

Defining $F(T,X) \equiv U(T,X) - T \; S(T,X)$ (which you might recognize as the (negative) Legendre transform!), we thus see that this is the appropriate quantity to variationally extremize when keeping temperature fixed! More generally, the above actually shows that $$ \boxed{ \left. \frac{\mathrm dF(T,X)}{\mathrm dX} \right|_{T} = \left. \frac{\mathrm dU(S,X)}{\mathrm dX} \right|_{S} }, $$ for any value of $X$. If we enforce this as our physical requirement, then the above can be read as a proof that this uniquely gives the above $F(T,X)$ (called the Helmholtz free energy) up to an arbitrary function $f(T)$ (which is independent of $X$). To kill this remaining arbitrariness, we can in addition note that if we go for the aforementioned minimal choice of $F(T,X)$, then we have the pleasant property that (exercise) $$ S(T,X) \equiv -\left. \frac{\mathrm dF(T,X)}{\mathrm dT} \right|_{X}. $$ In other words: just as the derivative of the internal energy w.r.t. entropy gives us temperature, the derivative of the free energy w.r.t. temperature gives us the entropy (note that requiring this property forces our above unknown function to be constant: $f(T) = \textrm{cst}$). The significance of this is that it makes the whole process an involution! I.e., if we use $F(T,X)$ as our original starting point and feed it in at the top, we will end up with $U(S,X)$ as the result (possibly up to an irrelevant constant). In particular, this means that $F(T,X)$ and $U(S,X)$ carry the same information!

Not the answer you're looking for? Browse other questions tagged classical-mechanics thermodynamics lagrangian-formalism hamiltonian-formalism or ask your own question.

2
Is there a physical connection between Lagrangian mechanics and Hamilton mechanics
0
Legendre-Fenchel transformation
0
Why are so many (all?) Key concepts in thermodynamics derived from a legendre transformation?
12
A mathematically illogical argument in the derivation of Hamilton's equation in Goldstein
16
Why exactly do we say $L = L(q, \dot{q})$ and $H = H(q, p)$?
9
Why can't we obtain a Hamiltonian by substituting?
7
Any reason why the Lagrangian just happens to show up in the path integral?
5
Writing $\dot{q}$ in terms of $p$ in the Hamiltonian formulation
7
Why is the Hamiltonian the Legendre transform of the Lagrangian?
6
Legendre transformation: non-convex/non-convave functions
See more linked questions