To familiarize myself with concepts from my system modeling class, I have posed myself the following problem, which I have been struggling with for a good while now. I am an absolute physics beginner, so it is likely I fundamentally misunderstood some things about pressure etc. 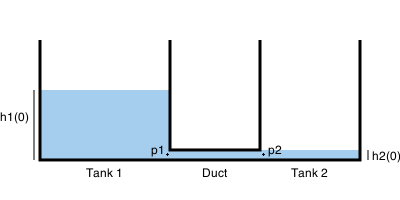 I assume that atmospheric pressure is zero and the water velocity at the top of the tanks can be neglected as the duct should be much smaller than the tanks and thus water flows there much faster. By Bernoulli's principle, I think that the pressure at the surface of tank 1 and the pressure right before the duct ($p_1$) should be related as follows:

Now that I have these two pressures, I tried to model the force acting on the mass of water inside the duct (which is $\rho A_d l$) as follows:

I modeled the height of the first water tank based on the volume of water in it ($V_1(t)$) as follows:

When I run this model in Simulink, I the height of the two water tanks keeps fluctuating like a pendulum, instead of reaching the expected equilibrium where the water heights are the same.

An approach that gives a qualitative feel for this problem is as follows. It is well known that $\Delta P = kF^2$, where P is pressure, F is flow, and k is a constant that depends on Reynold's number, duct cross-sectional area, duct roughness, duct length, etc. Thus, k is essentially a "fudge factor" that greatly simplifies the problem.

For the $\Delta P$ term, determine the pressure difference between the two tanks by using the equation $\Delta P = \rho g (h1 - h2)$, where $\rho$ is the density of the fluid that you are using.

Note that flow can be solved directly by using a bit of algebra. Also note that as the height difference between the two tanks decreases, the flow decreases.

Regarding the constant k, if you know one flow rate at given liquid heights, you can calculate it directly. If you don't know this information, a rather tedious and detailed calculation will be needed to calculate the required value. Rather than do that, I would recommend running an experiment where you record liquid heights vs. time. Then, develop a digital model of the process to calculate flow rate vs. time, and manipulate k until your simulation matches your data.

This is for @David White.

Not the answer you're looking for? Browse other questions tagged homework-and-exercises fluid-dynamics simulations bernoulli-equation or ask your own question.