Torque on a shelf

Say I have a shelf anchored to the wall (how it's anchored doesn't matter here I think), with a mass (m) taking up most of the space on the shelf: 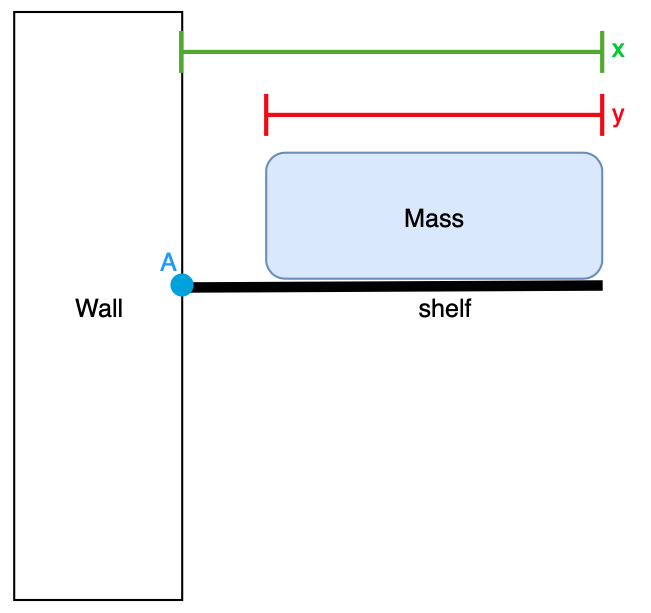 Say the shelf is x meters long, and the mass is y meters long, such that y < x, and (x - y) << x. The mass is pushed right up to the edge of the shelf. Assume the shelf itself is weightless, and that it won't break away from the wall, fracture, or move in any way.

Question: How do I figure out the torque exerted on point A, where the shelf meets the wall?

I know I used to know how to do this, but there's enough missing from my previous knowledge that I can't figure it out and I can't form a good enough search query to find more information.

I know I could find the torque on A if the mass was skinny enough that the distance y was trivial, it would be m * x. Given that y is not trivial, my brain tells me there should be an integral involved, but I can't figure out what it should be.

Your intuition is right, the solution does involve an integral as shown in PiKindOfGuy's solution. The expression he derives for torque simplifies to $$mg(x-\frac y2)$$ If you compare this to the basic equation for torque $$\mathbf\tau = r \times F$$ You can see that you can treat the weight of the extended object as a single force acting at the center of gravity. In this case we're assuming the mass of the object is evenly distributed so the center of gravity is just the geometric center which would be located $\frac y2$ meters from the end of the shelf.

Given that y is not trivial, my brain tells me there should be an integral involved.

Actually, there is no need to an integral - you can just use the COG of the mass. Your resulting torque will be $\tau=m(x-\frac y 2)$.

It is easy to show why this approach works.

Not the answer you're looking for? Browse other questions tagged torque statics or ask your own question.

2
Torque Required For a Motor to Move an Object on Wheels?
0
Calculating torque in a structure
0
Torque and equilibrium
1
How does the weight of the pendulum's bob cause a torque?
1
Instead of a dynamo-meter, why can't we use $\tau=I\alpha$ to determine the power of a rotating shaft?
1
Shelf always tipping over when pushed, thanks to normal force
1
Three Dimensional Torque on a Sphere