In a camera pixel, why does photon shot noise *not* result in a poisson distribution?

I'm currently working to characterize the noise in a CMOS camera. I understand that on top of the read noise and dark noise inherent to the sensor, the data is also subject to photon shot noise.

I've taken some data in uniform lighting conditions and measured the variation of values of a particular pixel over time.

The Wikipedia article on shot noise in optics reflects this relationship, using "$\propto$" rather than "$=$" but does not explain why.

Why is this? If photon shot noise is poisson distributed, why isn't the variance equal to the mean? I suspect the answer has something to do with the area of my pixels - am I somehow effectively taking multiple samples from the poisson distribution and averaging/adding them?

Additional info in response to questions 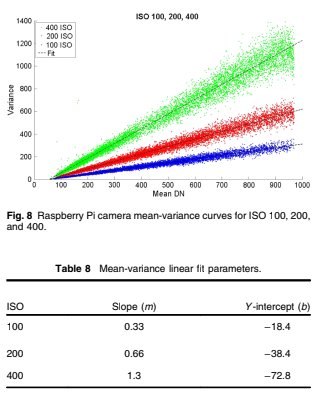 As you can see, at each ISO tested, there was a linear relationship between mean and variance, but the slope differs based on ISO. The unit, DN, is the Digital Number readout of intensity which goes from 0 to 1024 in this camera.

I do not know what your DN units are but I doubt they are detected photons.

In a CCD camera you have a parameter called the "gain" $g$, which can be defined as the number of analogue to digital units produced by each electron read out (which is the number of detected photons).

Thus if you record $n$ adus, this corresponds to $n/g$ detected photons.

The variance of the detected photons will be $n/g$ (just Poisson noise, ignoring the readout noise), but the variance on $n$ will be $ng$. [ To spell this out. The uncertainty in the photon count is $\sqrt{n/g}$. To convert this to adu, multiply by $g$. Then square the result to get the variance in adu.]

In most astronomical CCDs I have used, the gain is set so that the readnoise is properly sampled. i.e. The readnoise is about 2-3 adus. On the other hand you might sacrifice precision to avoid saturation of bright sources by reducing $g$. I guess this is what is happening with your different "ISO" settings. Hence the gain for ISO 100 is half that for ISO200 etc.

Your pixel has a size which roughly gives it a well size (how many electrons it holds). Let's say it holds 10,000 e but it is only half exposed at 5000e, the shot noise is sqrt of 5000 or ~~75 electrons. Also your pixel has a QE of probably 60% so it took ~ 9000 photons to get the signal. For short exposure times dark noise is small so likely your total noise is the sqrt of read noise^2 + shot noise^2.

Also, Fyi, shot noise is the noise in the light signal itself, there is no light source that produces a perfectly steady beam, it's all probability and QM.

Not the answer you're looking for? Browse other questions tagged optics quantum-optics or ask your own question.

7
Photon statistics of an incandescent light source
5
why isn't the variance of Fano noise proportional to the number of photon arrivals?
19
Why do coherent states have Poisson number distribution?
9
In what sense are shot noise and photon pressure canonically-conjugate variables in the LIGO interferometer?
1
What is the role of temperature in photon shot noise departing from Poisson?
2
Why exactly is the Husimi-Q distribution not a real probability distribution?
0
Shot noise and single photon detection
1
Why does phase conjugation not result in superposition?
2
Can there be multiple shot noise sources? For example: laser & camera