Why is Mars so cold when it has so much atmospheric $CO_2$?

Mars has 1/10 of Earth's atmosphere but that atmosphere is 95% CO2. Why is Mars so cold when it has so much atmospheric CO2?

There is indeed a greenhouse effect on Mars. I have not been able to find any direct citations but I believe it is several degrees. To understand in detail why it is relatively small (despite there being more CO2 in the atmosphere of Mars in absolute terms than there is on Earth) really requires running a numerical model (these are the references I was looking for but did not find), but it's fairly easy to see some reasons why the effect is relatively small.

The second effect is $\sigma T^4$: black-body radiation goes as the fourth power of temperature. If you assume a surface temperature of Mars of $218\,\mathrm{K}$ and of Earth of $287\,\mathrm{K}$ this means that there's about 3 times more thermal radiation from the surface of Earth than from Mars. That means that greenhouse effects, which depend on absorbing & reradiating this upward thermal radiation from the surface, are far less significant.

Slightly peripherally but importantly, the absolute value of greenhouse effects is of somewhat secondary importance. If Earth's average surface temperature was 2 degrees higher than it is, or 2 degrees lower, then it would be perfectly habitable. It probably would be somewhat less habitable if it was 10 degrees higher or lower, but 2 is fine. The problem people worry about is not the absolute effect, it's the rate of change with time. As an example consider recent ice-ages: these involve temperature swings of a little over 10 degrees. Deglaciations happen much faster than glaciations, and the most recent one took about 10000 years. So that's about a degree every 1000 years. (Glaciations take about 100000 years, so a degree of every 10000.) The current rate of warming is something like ten times faster than that.

The atmosphere is really tenuous. Don't underestimate just how tenuous it is - I think someone above said 0.6% of Earth's atmosphere. So even though the proportion of carbon-dioxide is very much higher than on Earth, there is still not very much of it!

It's so thin, the atmosphere of Mars, that I'm actually quite amazed when I see pictures of duststorms there.

The other answers clarify that the density of the atmosphere and the amount of heat from the sun are very much less than on earth. I would just like to make clear the role of CO2 in the greenhouse gases spectrum.

The main, by an order of magnitude, green house gas is water vapour: 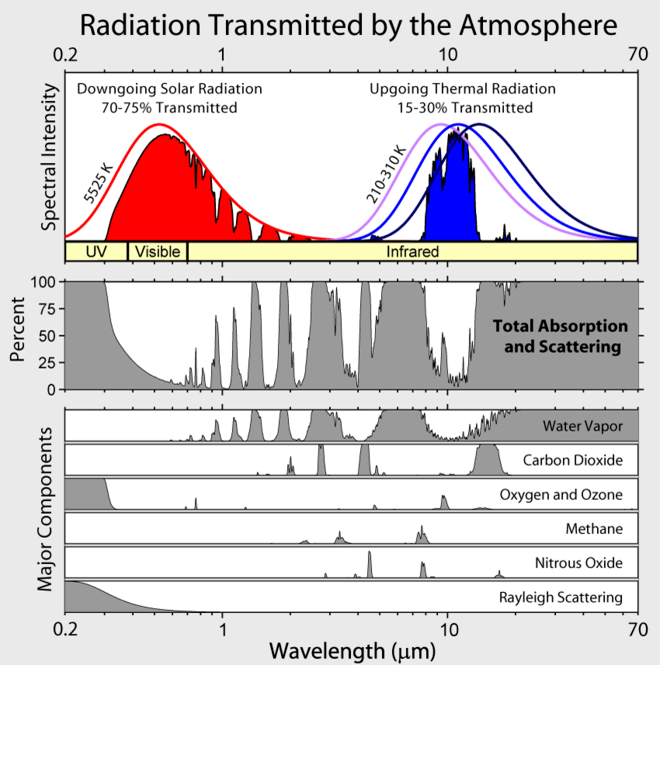 Atmospheric absorption and scattering at different wavelengths of electromagnetic waves. The largest absorption band of carbon dioxide is not far from the maximum in the thermal emission from ground, and it partly closes the window of transparency of water; hence its major effect

The "hence its major effect" needs clarification. The models giving a leading role to CO2 even if it is in percentage something like 5% of the effect of water vapor in the energy balance of radiations, use it as a trigger for increasing the H2O content in the atmosphere, a feedback loop. If there were no water vapour in the atmosphere there would be very little green house effect. The argument goes "increase of CO2 and other gases like methane, increase water vapour in a multiplicative way, called climate sensitivity.

As Mars has very little water vapor the greenhouse engine as modeled for earth cannot work. It is just another gas trapping a bit of the heat in the range shown in the diagram above.

Not the answer you're looking for? Browse other questions tagged atmospheric-science planets climate-science exoplanets or ask your own question.

9
What would happen if the polar ice caps of Mars melted?
3
Is CO2 really a potent greenhouse gas for planets around M dwarfs?
10
Why is the surface of Venus so hot?
5
How much atmospheric pressure (CO2) is required to carry iron oxide dust in the wind?
0
Does atmospheric $CO_2$ heat up when or while or after it reradiates IR back towards Earth?
0
Earth-like atmosphere on Mars, possible?
2
How can atmospheric $CO_2$ absorption of infrared be 100% when its atmospheric concentration is 0.04%?