Why does not the central force $-1/r^4$ violate Bertrand's theorem?

Goldstein defines closed orbits as orbits in which the particle eventually retraces its own footsteps.

Bertrand's theorem says that the only forces whose all bounded orbits are closed are the inverse-square force and Hook's law.

My concern is the following: The attractive force $-1/r^4$ has only one bounded orbit, namely the circular orbit. This can be easily seen by the energy diagram bellow, where it is plotted the effective potential. 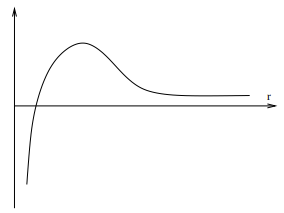 But the circular orbit is certainly closed which seems to violate Bertrand theorem. How to solve this inconsistency?

A possible solution to this paradox would be to consider an alternative definition of open/closed orbits: A bounded orbit is said to be open if, given a sufficiently large time, it completely fills the ring with internal and external radius $r_{min}$ and $r_{max}$. Otherwise it is called closed. Then a circular obit is open since $r_{min}=r_{max}$. It sounds a little weird to say a circular orbit is open though.

Any other explanation? Or am I missing something here?

An English translation of Bertrand's original work can be found here. He opens by quoting the Binet equation, but this implicitly rules out circular orbits from everything that follows.

Consider an object with energy $E$, as seen in the graph below: 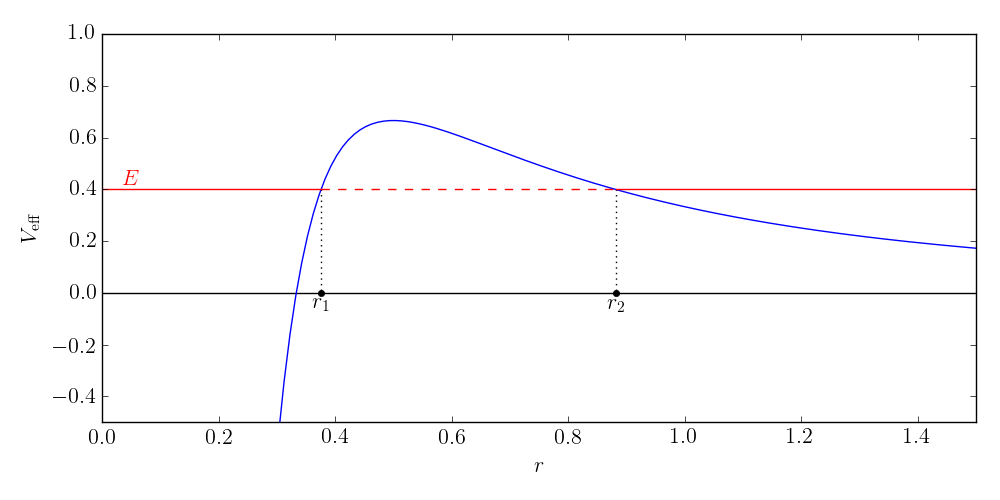 Therefore, the orbit of this object is bound by $r_1$, but it is not closed.

Bertrand Theorem is actually applicable for bounded orbits which are also stable. The potential $-1/r^4$ do allow a circular orbit, but that is unstable. For any force law of the form $f=-kr^n$, stable orbits are only possible for $n>-3$.

Not the answer you're looking for? Browse other questions tagged classical-mechanics orbital-motion or ask your own question.

4
What is the difference between a bounded orbit and a closed orbit?
15
Conservative central force and stable orbits
5
Condition for closed orbits
1
Question about a system with all bounded orbits closed and maximal integrable
1
Rigorous proof of Bertrand's Theorem for orbits under central force
2
A doubt in a Wikipedia article discussing Bertrand's Theorem in Central force motion
0
Doubt in expressing a solution as Fourier expansion