Why does bike trip on the opposite side when turning the handle?

It can be observed on a stationary bike and also on a moving bike that on giving a jerk on the handle the bike leans to the opposite direction in which the jerk is given. Is it due to angular momentum, directional inertia or some other phenomenon is applied here? Or it's just due to design of bikes to easily shift centre of gravity?

When you turn the front wheel, its center and, therefore, its point of contact with the ground, shifts in the direction of turning and becomes misaligned with the plane of the bike, which becomes more obvious, if you turn the wheel by a large angle, say, $90^{\circ}$.

This happens due the fork offset, shown on the picture below (copied from this page), which is an offset between the center of the wheel and the steering axis. 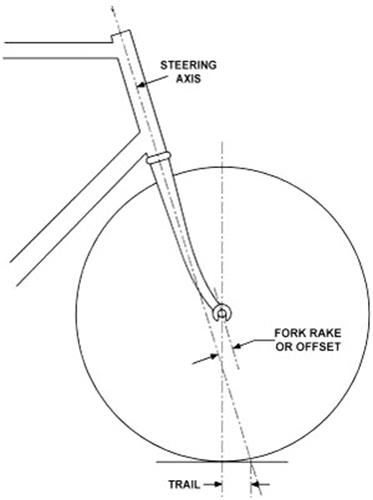 Since your COG (blue dot on the diagram below) lies in the plane of the bike (solid vertical line), your weight develops a torque relative to the axis (dashed line) connecting the points of contact of the front and rear wheels (red dots) and the bike leans in the direction opposite to the turn. 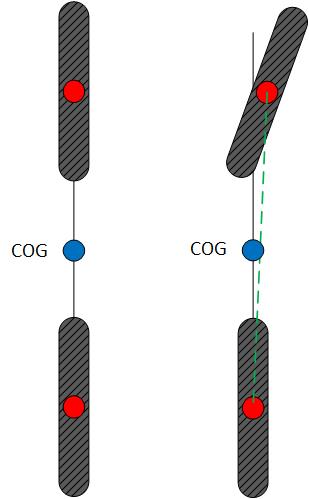 The mechanism described above will have an effect, even if the wheel is turned slowly, but the effect may not be significant enough in comparison with other factors.

For instance, if you give a handle bar a jerk, your body may twist and, as a result, its COG may shift a bit in the direction opposite to the direction of the jerk, causing the bike lean.

Not the answer you're looking for? Browse other questions tagged angular-momentum free-body-diagram angular-velocity design or ask your own question.