Let's say we have a time varying magnetic field, but that it is uniform over a region, for instance $B(x,y)=(t+2)\hat{z}$ for $x,y,z\in[-5,5]$. Since we have a changing magnetic field, there will be an accompanying induced electric field given by $\oint\vec{E}\cdot \mathrm{d}\vec{l}-\frac{\mathrm{d}\Phi_B}{\mathrm{d}t}$, where the electric field is integrated along some closed path, and $\Phi_B$ is the flux through that path. Let's take a simple example, two circles, one centered at $(1,0)$ and the other at $(-1,0)$, both with radius 1. If we draw these out though we get 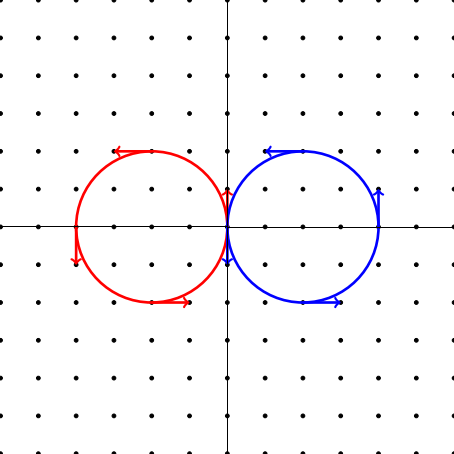 Since $B$ is uniform, and they're the same path just shifted, the magnitudes of the induced fields are the same, but they give opposite directions at the origin where they meet. So from this, it appears as if different choices of loop can give wildly different values for the field at the same point, but in real life that electric field must have some value, so how is this?

In application there would be an actual wire loop in the field we could integrate along, but the induced electric field should still exist and be self consistent, even with a lack of wires.

When there is a time-varying magnetic field, the electric field is no longer conservative, meaning that $\nabla \times \mathbf{E} \neq \mathbf{0}$. Thus, $\oint \mathbf{E} \cdot \text{d} \mathbf{l}$ will depend on the path chosen.

they're the same path just shifted

This is not true in general. The paths may be geometrically identical, but they are located at different positions in space and have different equations. The red path has equaton $(x+2)^2 + y^2 = 4$ and the blue path has equation $(x-2)^2 + y^2 = 4$. The limits of integration and the parameterized paths will also be different.

they give opposite directions at the origin where they meet

You cannot uniquely determine $\mathbf{E}$ just from knowing $\nabla \times \mathbf{E} = - \frac{\partial \mathbf{B}}{\partial t}$. You need to know $\nabla \cdot \mathbf{E}$ as well. Even then, the solutions to these equations aren't necessarily unique, and additional boundary conditions must be applied. $\mathbf{E}$ is not necessarily uniform in this case, as symmetry might suggest. $\oint \mathbf{E} \cdot \text{d} \mathbf{l}$ only tells you the total component of $\mathbf{E}$ along the path $\mathbf{l}$, and the fact that it encloses an area of uniform $\frac{\partial \mathbf{B}}{\partial t}$ tells you nothing about $\mathbf{E}$ itself. In your scenario, $\mathbf{E}$ does have a definite direction everywhere in space, but that is unknown without further information about the field.

P.S. See my comments below for more elaboration.

Not the answer you're looking for? Browse other questions tagged magnetic-fields electric-fields or ask your own question.