Why do we say there are four fundamental forces in the Standard Model (if gravity is included)? [duplicate]

Ask Question
Asked 2 years, 11 months ago
Active 2 years, 8 months ago
Viewed 3k times
12
$\begingroup$
This question already has answers here:
Why are there only four fundamental interactions of nature? [closed] (10 answers)
Should 4 fundamental forces really be 3 because of electroweak unification? (2 answers)
Closed 2 years ago.

In my physics textbook (and in popular science culture) it is stated that there are four fundamental forces: electromagnetism, strong, weak, and gravity.

But Wikipedia tells me that there is a unified description of electromagnetism and the weak force (electroweak interaction), and that this model is generally accepted in a way that eludes e.g. Grand Unified Theories which would unify the three non-gravity forces.

So why don't we say that there are three fundamental forces instead?

This is one of my favorite subjects, so I'll add some clarification about what we really mean when we way that the EM and weak forces are "unified".

In the Standard Model of particle physics, which is part of the foundation for our present understanding of nature, there are three distinct force fields (physicists call them gauge fields).

In the Standard Model, each of these three force fields — namely $SU(3)$, $SU(2)_L$, and $U(1)_Y$, couples to matter with a different strength than the others. That's why they are considered to be three distinct fields, not really unified in the strictest sense. However, as indicated in Aaron Stevens' more-concise answer, at a low enough temperatures (what we would call "normal" temperatures today) the famous Higgs field causes the $SU(2)_L$ and $U(1)_Y$ gauge fields to mix with each other, resulting in two different mixtures that we experience as the long-range electromagnetic force and the very-short-range weak force.

The point of this long monologue is to clarify what "unified" really means in this context. The EM and weak forces are two different mixtures of the more-fundamental $SU(2)_L$ and $U(1)_Y$ fields. So there are still four fundamental force fields in our current understanding of modern physics: the strong force $SU(3)$, the one called $SU(2)_L$, the one called $U(1)_Y$, and gravity. (The Standard Model of particle physics does not include gravity.)

On the other hand, we do have indirect theoretical reasons to suspect that $SU(3)$, $SU(2)_L$, and $U(1)_Y$ really are unified in the strict sense of being different parts of a single field with a single coupling strength to matter. We do not yet know exactly how to implement this strict form of unification theoretically. Even if the idea is correct, this higher symmetry would only be evident at even higher temperatures than the ones we would need to "un-mix" $SU(2)_L$ and $U(1)_Y$.

I would say it's because of history, as each of the four forces were discovered as separate forces.

I will also say it's due to how we experience them today. They are currently four separate forces. They become unified at very large energies/temperatures, which were present very soon after the big bang. But once the universe cooled the electroweak force split into two forces.

Mouseover: "Of these four forces there's one of them that we don't really understand." "Is it the weak force or the strong--" "It's gravity."

The xkcd comic above is available under a creative commons license.

Keep in mind that saying there are four fundamental forces is basically a heuristic tool to help teach a complicated reality. One of many reasonable ways of defining a force operationally for purposes of counting how many fundamental forces there are in layman's level descriptions of science is to define a force as one that counts as separate if it is associated with a particular type of gauge boson that couples to a particular kind of charge. 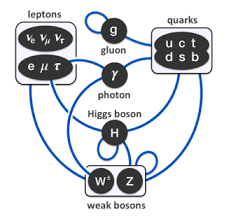 This definition, for example, naturally treats the electrical force and magnetism as unified (because both involve interactions of electrically charged particles via photons), while treating forces commonly thought of as separate as separate.

This definition also works for the weak force, because while it has three kinds of gauge bosons (the W+, the W- and the Z), all three couple to the same "charge" (i.e. weak isospin) with the same coupling constant, and are also similar in that they are all massive and short lived.

Indeed, the harder point for most people is really to explain why W bosons are gauge bosons whose interactions count as forces, despite the fact that these interactions are very unlike the paradigm of massless photon/gluon/graviton mediated interactions, which look much more like what we intuitively think of as forces (with the twist that gluons and gravitons, unlike photons, interact with each other as well as appropriately charged fermions). But, your question indicates that you aren't struggling with that question and mathematically, the weak interaction closely resembles the other Standard Model forces.

Other questions and answers have addressed why the Higgs boson is not a gauge boson, and the Higgs field don't count as a force, even though this is a fundamental boson and a fundamental field of the Standard Model (which couples in proportion to a fundamental particle's rest mass).

There Could Someday Be More Or Less Than Four Fundamental Forces

History does play a part as well.

Gravity was formulated as force, with a form that Maxwell's equations would mimic three centuries later, in 1687 by Newton, and in so doing unified the force governing the movement of the planets and the force that makes objects fall to the ground. Its general relativistic extension was proposed by Einstein by 1915, more than a century ago. Ironically, despite being the oldest of the mathematically formulated fundamental forces, we understand it less well today than we do the three fundamental forces of the Standard Model. It is the only force for which we do not have a viable quantum formulation, even though we have come tantalizing close to doing so to the point where we can describe a hypothetical graviton's properties almost completely, but can't calculate with this theory.

The scientific investigation of electricity and magnetism was well under way in the 17th century, the unification of electricity and magnetism was starting to emerge in the 18th century and refined in the decades the followed, Maxwell unified optics and electromagnetism in the 1860s, Maxwell and Heaviside had fully formulated Maxwell's equations of classical electromagnetism by the late 1800s, Einstein proposed the existence of the photon in 1905 which was confirmed by the 1920s, and quantum electrodynamics (the quantum version of electromagnetism) was developed starting in the 1920s and was complete before the Nobel Prize was awarded for discovering it in 1965.

Beta decay (which is caused by the weak interaction) wasn't discovered until 1896 and wasn't even conceived of as a force until Fermi came up with (an inaccurate) description of it as a contact force in 1933. An accurate description of the weak force as part of a comprehensive electroweak interaction wasn't devised until 1968, and the W and Z boson weren't directly confirmed to exist until 1983. Given that this distinctive phenomena was unified theoretically with electromagnetism just 50 years ago, it is unsurprisingly treated as something different from electromagnetism even though it is intimately related to it.

The strong force, meanwhile, wasn't understood in any meaningful fashion until the 1970s. Gluons weren't hypothesized until 1962, color charge wasn't really formulated as a concept until 1973, and the quark-gluon model wasn't confirmed experimentally until experiments confirming it were conducted in 1978 (the same year that the term "quark" was coined) and 1979. The last of the quarks to be discovered (the top quark) wasn't experimentally confirmed to exist until 1995.

The concepts of the Higgs boson and Higgs field were proposed from 1960 to 1972, and confirmed experimentally in 2012.

First of all lets talk about unification of two forces: electromagnetic force and the weak force.

Before unification we didn't know that they were one thing.Since we have come into existence way too after bigbang we observed two forces : electromagnetic force and the weak force rather than electroweak force which are like the daughter cells of the parent cell:electroweak force

Like @Aaron stevens has mentioned, it's because of history we have four forces.If people find what they call Theory of everything,then you could say that everything is one thing,but you would still be studying that there are four fundamental forces.

The answers cover the historical reason for fundamental forces. I would like to clear up the following.

In the framework of field theoretical models for particle physics data, where the claim of four fundamental forces is made, mostly all calculations from the theoretical models ( which are described by the other answers) to compare with data, are made through the use of Feynman diagrams..

In this iconic representation of the integrals that have to be calculated, each vertex exchanges virtual particles , transferring a force, dp/dt, and any virtual particle transmits a force .

For example electron positron annihilation happens with the virtual electron transferring the force. The fundamental carrier of the force though, to separate it out of all the other possibilities, is the first one, which exchanges a photon. Photons, gluons and the W and Z are the gauge bosons and define the first order exchanges characterizing the interactions in the SU(3)xSU(2)xU(1) standard model of particle physics..

These gauge bosons are inherent in the mathematical formulation of the theory and characterize it, in one to one correspondance with the fundamental forces. That is why the discovery of the Z and W were important, they confirmed this mathematical model as much as the discovery of the Higgs later. There may come other gauge theories in the future which will have their own gauge bosons and thus increase the fundamental forces, but it is a waiting game for the data. That is why the graviton is posited, it is the gauge boson of gravity, once gravity is definitively ( and not effectively) quantized.

Not the answer you're looking for? Browse other questions tagged forces gravity standard-model interactions unified-theories or ask your own question.

47
Why are there only four fundamental interactions of nature?
6
Should 4 fundamental forces really be 3 because of electroweak unification?
68
Why isn't Higgs coupling considered a fifth fundamental force?
0
Left Handed / Right Handed Particles and the Weak Force