How does the current become homogeneous within a circuit?

This question is likely best approached in the context of transmission line theory where we actually study such transients. In 'ordinary' (ideal) circuit theory, we use the lumped element model and make certain assumptions such that Kirchhoff's circuit laws hold (to good approximation).

But if you look at the turn-on transient at high enough resolution, you see that the battery initially doesn't 'see' the resistors at the 'far' end of the circuit but, rather, some characteristic impedance that is a function of the geometry of the circuit and connecting wires etc.

(The following will necessarily omit some finer points for the sake of clarity of exposition.)

That is, at turn-on, a 'wave' is launched from the battery 'down' the connecting wires towards the resistors. There is both a voltage wave and a current wave. At this point, the ratio of the voltage and current is determined by the characteristic impedance rather than the parallel connected resistors.

This wave propagates with speed $u \lt c$ and, upon reaching the first resistor, is (generally) partially reflected (back towards the battery) and partially transmitted (towards the second resistor).

So, after a while, there is this superposition of many counter-propagating waves from the multiple transmissions and reflections. The voltage and current associated with each wave individually are related by the characteristic impedance however, the total voltage and current due to these is (quite remarkably) the steady state solution for the circuit. 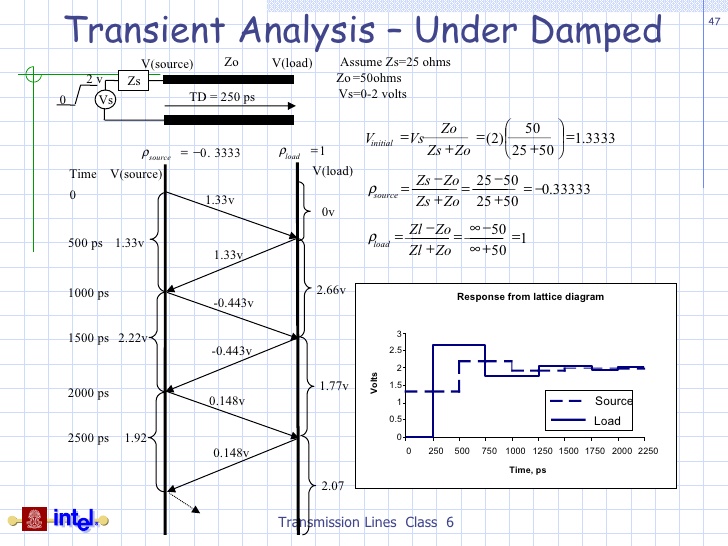 See how the source and load voltages are not the same initially but eventually converge as the multiple reflections superpose to the steady state solution.

In a given circuit with resistances of different values connected in parallel, there is a different build up of electrons when the power source is turned on. Then, how is the voltage over both arms of the parallel circuit equal to that of the battery?

Think of voltage as an "electric pressure". Similar to pressure in a water pipe.

The voltage is the same at any point that hasn't been interrupted by a resistor, of the same reason that the water pressure is the same at any point in a pipe system that hasn't been interrupted by a filter/constriction. A Y-split in a pipe system makes no difference for the water pressure. The water coming from behind wants to go equally much to each point it has access to, so the pressure is the same at each point. But if you for example squeeze a hose and hold the water back, then your resistance is putting a lot of pressure into holding the outgoing water back, while you spend no pressure on the water that has already passed through. The pressure difference across this squeezing is big.

Before the resistors, if there was a smaller "pressure" at any point, then the closest electron would feel a larger pressure from one side than from the other. Then, naturally, it would move towards this point of lower pressure. If any such lower pressures existed anywhere, they would therefor be equalized quickly.

The result is that all neighbor points must have the exact same pressure - the same voltage.

How does the current become homogeneous within a circuit?

The current can be different in different branches, such as the two paths through a parallel circuit. But it is constant.

What else can be said about the field effect which has been explained in question 1?

Wow, that is a broad question...

Not the answer you're looking for? Browse other questions tagged electricity electric-circuits electric-current electrical-resistance conductors or ask your own question.

0
How to evaluate, how much current flows in the circuit?
0
Parallel RL-Circuit with non-sinusoidal current source
1
How does the current change?
0
Resistance in internal battery, voltage source
0
Circuit Analysis - Grounding and Current
1
A battery generates current according to the resistances within a circuit(V=IR)
0
How does the initial turn-on transient decay into the steady state in a given circuit?
2
Voltage Drop Explanation. Is it correct?