How is force related to launching objects with a lever?

Suppose we have a class 1 lever, lifting a load of constant mass. All distances remain the same and the only thing that changes is the magnitude of the force applied (effort). Intuitively we know that the more effort (force) there is, the more force will be applied to the load and after a certain threshold, the load will be launched into free flight.

From Newton's Second Law, we have F=m*a. If the mass of the object stays the same, then the more force, the more acceleration.

Again, intuitively this should be wrong since depending on the speed/acceleration of the force applied different situations occur. For example, I can imagine a sufficiently quick motion of mass double the size of the load, catapulting the object but I can't imagine a huge mass moving or accelerating incredibly slowly having the same result. The load will just sit on and move together with the arm on the lever and never develop enough speed in order to fly.

I thought that conservation of momentum must be involved because it relates time, mass and speed but I don't know how exactly to think about it. 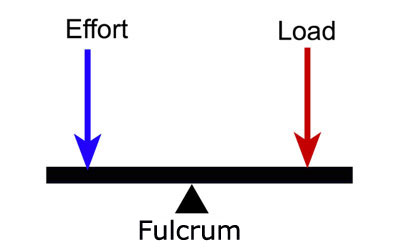 For a load to be launched or separated from the lever, it has to have some final speed, $v_{fin}$, at the moment, when another side of the lever, where the force is applied, hits the ground or is abruptly stopped by some other means.

Even if $v_{fin}$ is insignificant, the load will attempt to take off, but since the lever under the load is deformed, it may just follow the load, so that the load never gets separated or launched. So, for an impressive take-off, $v_{fin}$ should be high.

With the work-energy approach, a greater leverage will mean a lower required force and a greater distance.

With the impulse-momentum approach, a greater leverage will mean a lower required force and a longer time.

Both approaches will yield the same required force.

According to my understanding, catapulting mechanism doesn't work this way

Its not just about the Force you are applying but also about momentum (or velocity) that the effort is able to provide.

If you keep on increasing the mass and reducing the acceleration on the effort side to keep the value of Force (effort) constant, there will be a point where the effort would move the load very slowly (reversibly per se)

Not the answer you're looking for? Browse other questions tagged forces mass momentum acceleration or ask your own question.

39
Where does the extra force generated by a lever come from?
0
How can I calculate the initial velocities of a set of objects with a consistent force?
0
Particle simulation: understanding mass
1
Does it make any difference for robots with motors, to use a lever to pick up things compared to usual picking up?
1
How do objects begin to roll if static friction equally opposes the applied force?
0
A vector represents a force with its magnitude and direction but could it also represent the time it was applied for?