Hubble's time and the age of the universe

If Hubble's time is the inverse of a changing Hubble's "constant" and it estimates the age of the universe up to now, since Hubble's parameter is converging to an actual constant value, how can the inverse of a constant continue to measure the time since the Big Bang towards the future?

I think this plot answers your question. It is taken from Frieman (2008) and shows the evolution of the scale factor for four cosmological models, each of which has the same value of the Hubble parameter (and scale factor) measured at the current epoch. 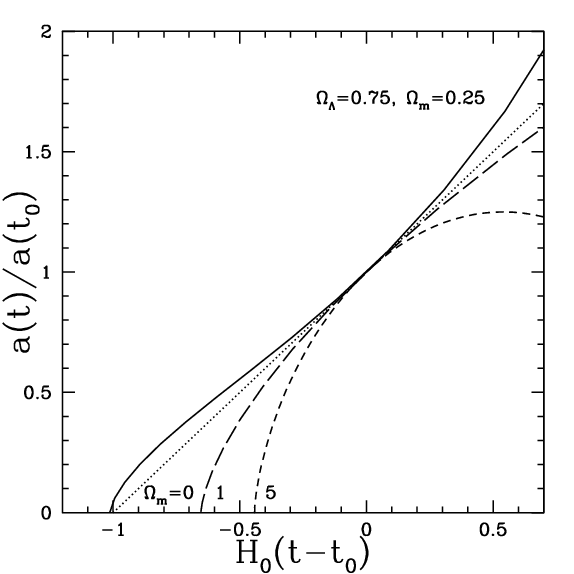 The approximation that the age of the universe is $H_0^{-1}$ is exactly true for an "empty universe" (dotted line), because the current expansion rate can be just extrapolated backwards to when the scale factor was zero.

We think that we live in a universe that isn't empty(!). On its own (dashed lines) this would lead to a decelerating expansion and an age younger than $H_0^{-1}$. However, the addition of dark energy (solid line) means the expansion decelerates, then accelerates. The net result is that the age of our universe is very similar to that of an empty universe with the same $H_0$ (solid and dotted lines are almost coincident when the scale factor is zero).

The bottom line is that we live now in a universe where $\Omega_M$ and $\Omega_{\Lambda}$ are similar. This will not be the case in the future and the age will not be given by $H_0^{-1}$.

Hubble's constant is not actually a constant. It is true the Hubble parameter is constant in regards to position and velocity of objects in the Universe at a certain time, meaning that for any measurement you get that $v \propto d $, where v is the velocity of the object away from us and d is its distance, Hubble's constant being exactly this proportionality factor. But this only means that for any given time the paremeter is the same for all objects, meaning that if you "look' at the sky at any given time you will find such a paremeter such that $v \propto d $ for all objects. This does not mean that the paremeter is constant over time, meaning that for two different times you still get that $v \propto d $, but with a different proportionality factor, so the rate of expansion actually changes.

Where $F$ is a function of the relative densities of matter ($\Omega_m$), of dark energy ($\Omega_{\Lambda}$)... For a proper calculation this needs to be taken into account, but for an approximate calculation it is fine to take $F \approx 1$, because that is actually close to the current accepted value of $F$, according to the accepted model, the $\Lambda $CDM. The issue with the parameter becoming constant, it won't, although it will assymptotically approach a fixed value. In spite of that, accounting for the changes on $F$, it would still be possible to calculate the age of the universe that way.

Not the answer you're looking for? Browse other questions tagged cosmology big-bang or ask your own question.

3
Is the inverse of the Hubble constant always approximately the age of the Universe?