How realistic is the game "A slower speed of light"?

The game "A slower speed of light" from MIT claims to simulate effects of special relativity:

Visual effects of special relativity gradually become apparent to the player, increasing the challenge of gameplay. These effects, rendered in realtime to vertex accuracy, include the Doppler effect (red- and blue-shifting of visible light, and the shifting of infrared and ultraviolet light into the visible spectrum); the searchlight effect (increased brightness in the direction of travel); time dilation (differences in the perceived passage of time from the player and the outside world); Lorentz transformation (warping of space at near-light speeds); and the runtime effect (the ability to see objects as they were in the past, due to the travel time of light).

But does restricting the render engine to special relativity not miss out several effects that might happen close to the speed of light? Especially I'm thinking about effects related to inertia and acceleration/rotation of the observer. So are there any important effects missing which would make the game a even more realistic simulation of the movement close to the speed of light?

and I join M. Buettner. I am confident that all relativistic effects are incorporated. It includes the length contraction in the direction of motion, time dilation, but those basic things are rapidly changed by the fact that it really shows what you "see" and not what "is there" at a fixed value of your instantaneous coordinate $t'$.

So the effects that are "purely optical" and depend on the propagation of light and relativistic effects changing it include the relativistic Doppler shift – things change the color immediately when you change the speed although the change of your location is negligible at the beginning – and the shrinking of transverse directions if you're moving forward (or their expansion if you move backwards) which makes object look "further" (optically smaller) if you're moving forward. Because of this shrinking, you may effectively see "behind your head". You also see things how they looked like some time ago.

Because of the transverse shrinking, you also see straight lines as curved ones if your speed is high enough. One should also verify that the streetcars moving in front of you from the left to the right are "rotated along a vertical axis". I couldn't verify this effect but I see no reason to think that their simulation should do it incorrectly.

Good game. See also Real Time Relativity and Velocity Raptor. You may get to those sources from my blog mentioned at the top.

However, I am confident that the "general relativistic" comments are straw men. If the spacetime is flat, and in the absence of strong gravitational fields, it is, there is no reason why the proper simulation should consider general relativity. Special relativity is enough, despite the fact that the child (and the other stars of the game) are accelerating. Of course, acceleration "tears" solid objects because the proper lengths change asymmetrically etc. but if the material is flexible enough, the objects survive.

There are some serious problems with the game. I wish I'd heard about it in 2012 when there might have been some hope of fixing them. I also wish Luboš Motl had noticed the problems in 2012.

I think the simulation of aberration is correct. It's hard to tell about time dilation and light-travel-time delay because not much is going on in the game world to begin with.

The biggest problem is that the Doppler shift simulation is ludicrously wrong.

Here's a screenshot from the game: 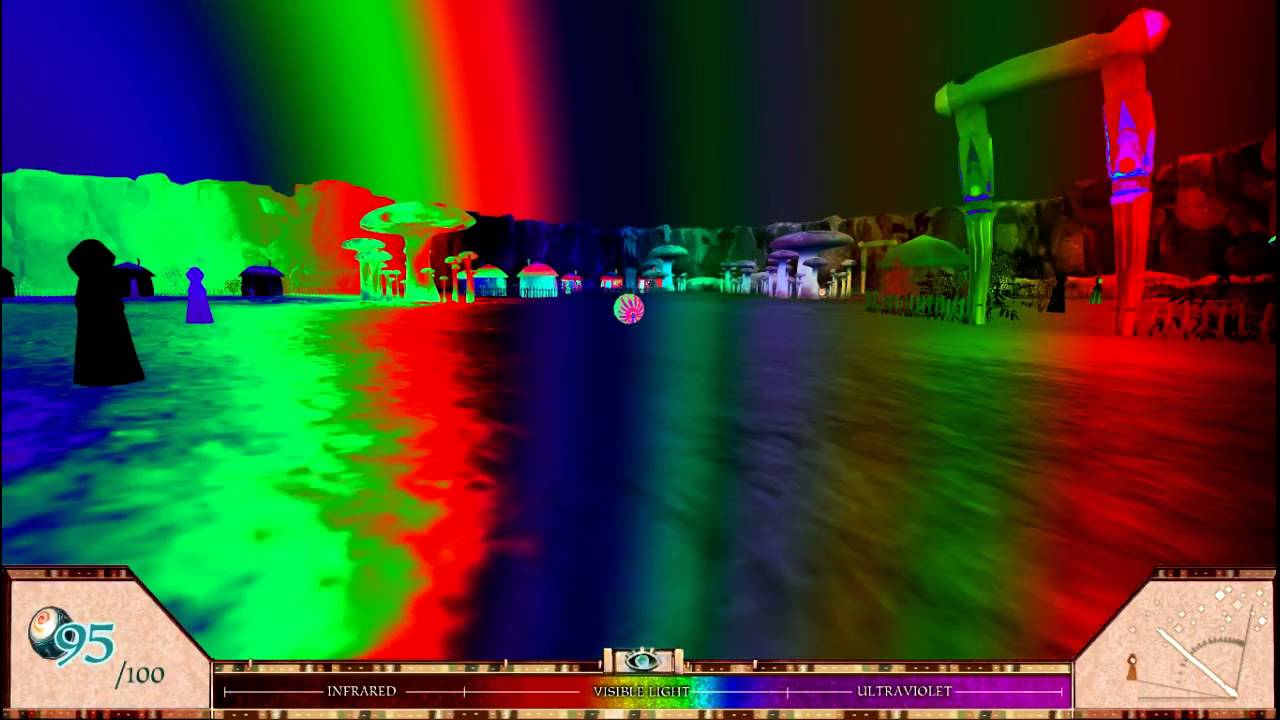 Here's a similar screenshot taken at rest, to which I applied a "Doppler gradient" using Doppler shift code from Backlight, the 4D raytracer: 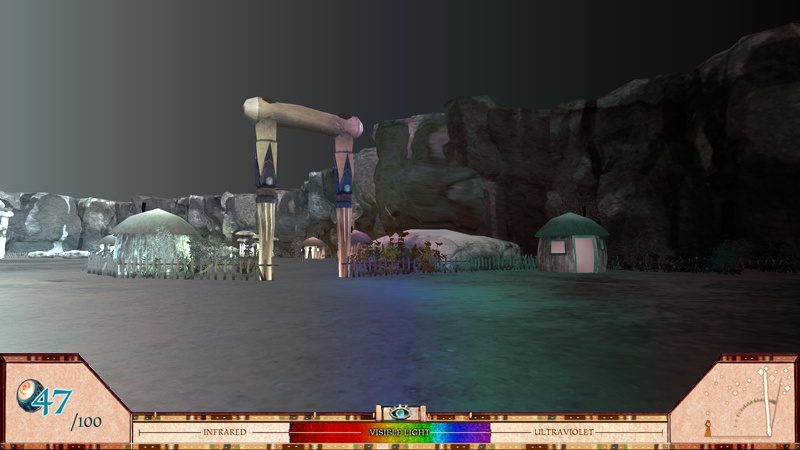 I certainly wouldn't take the second image as definitive, but it's qualitatively much closer to how the game ought to look. White objects illuminated by starlight have roughly a blackbody spectrum, so when Doppler shifted they should be red, white, or blue, never green or purple. Objects with desaturated colors should appear as desaturated rainbows (look at the ground, which is pale blue at rest). And the brightness should increase smoothly as you look from right to left.

The game isn't open source, but the Doppler shift shader is, so I took a look at it.

It works by guessing a light spectrum (represented as a sum of Gaussians in wavelength space) from the RGB components of the texture, scaling it by the Doppler shift factor, convolving it with approximations of the XYZ color matching functions (also sums of Gaussians), then converting XYZ to RGB. That's reasonable.

The first problem is that instead of guessing a broad spectrum that approximates a solar blackbody when the color is grey/white, they guess narrow spikes at 463nm, 550nm, and 615nm. That just isn't realistic, and it's the reason for all the weird colors in the right half of the screenshot.

The bright colors on the left are due to another strange design decision. Along with RGB they support IR and UV color channels which can be seen only when they're Doppler shifted into the visible range, which is a good idea. But they're again sharp spikes in the spectrum, and the textures control the wavelength of the spikes, while the amplitudes are fixed. For UV, you choose a wavelength from 0nm to 380nm (effectively an infinite range), while for IR it's 700nm to 1100nm (less than a 2:1 range). The reason you see bright RGB rainbows in every texture when blueshifted, but not when redshifted, has nothing to do with physics. It's because you can put the mandatory UV spike at 0nm where it will never be visible, but you can't hide the mandatory IR spike.

The brightness scaling appears to be wrong also. They multiply the width of the Gaussians by the redshift factor, which scales the integrated energy by the same factor, then they divide by the redshift factor cubed. As a result their Stefan-Boltzmann law is $σT^2$ instead of $σT^4$. They should have divided by the fifth power.

There also seem to be problems with the spectrum-to-RGB conversion code—the rainbow on the left would have ROYGBIV stripes, not just RGB, if converted correctly.

Another minor problem is they seem to calculate the effects based on how hard you're pushing the joystick, not how fast you're actually moving. E.g., the moving ghosts appear red/blueshifted when you're stationary, but if you stand in front of one and let it push you, it remains blueshifted though it's now stationary relative to you, and there are no motion effects on the background even though it's moving. The red/blueshift of the ghosts also doesn't seem to change as the speed of light ostensibly decreases.

The "what's going on" supplement at the end (also downloadable in Powerpoint format from the web site) has some mistakes.

Light also behaves like a stream of particles called photons. When you run towards a stream of photons, more photons hit you and the object becomes brighter. This effect is also known as Relativistic Aberration.

First, these effects are classical so quantization is irrelevant. Second, increased rate of photon absorption only accounts for a small part of the brightness increase. Third, aberration refers to a change of angle, not to more photons hitting you.

On this slide there's also an image captioned "moving left, the objects on the left are brighter than the objects on the right", even though that plainly isn't true in the image (which is similar to the image at the top of this answer). It should be true, of course. It's difficult for me to understand how they never at any point in development figured out that their shader was buggy given its crazy output.

Objects normally beyond your field of view can become visible when you move near the speed of light, as you see them as they were in the past.

Yes you see them as they were in the past, but you see them at the same past time no matter how fast you're moving (clocks will show the same reading independent of your speed, for example). Your field of view widens when you move forward because of aberration, which is most easily understood as a local effect due to motion of your camera/eye, as seen here.

Not the answer you're looking for? Browse other questions tagged special-relativity speed-of-light simulations or ask your own question.

16
How accurate are the wormhole visualizations in Interstellar?
6
Approaching speed of light: why do objects appear further away in front of me?
5
How would I perceive a purple ball when traveling at relativistic speeds
4
If I'm running away from chasing gamma photons, I can see them, right?
3
Insightful educational games about physics?
-2
What would it be like to go past the speed of light?
1
If we traveled at almost the speed of light would objects appear the same?