The question is simple as stated in the title. How relative humidity and temperature affect rainfalls? I can't find a satisfatory answer in the web. Who can help me to understand me this relation?

I think, this question more specific to meteorology and climatology than pure physics, but definitely can be answered in physics terms with some meteorological comments. Thereby, your question can be redefined as: How relative humidity, temperature, pressure and height relates to level of precipitation?

Firstly, we should look at basic ideas to understand this relations. Meteorology studies atmosphere, which includes air and it's fluctuations. In the same time, air is a mixture of gases. As any other gas, it can be described in physical quantities like temperature, pressure, density.

Air near Earth surface is moist. It means that in air mixture exist water vapor, besides other gases. In higher parts of atmosphere air doesn't have a lot of water vapor, so it is called dry.

Relative humidity(RH), $f$ described in last equation, which combines with Magnus equation and gives relation between temperature and RH. Note that coefficients $a$ and $b$ differs from location to location and maximum in equatorial zone over open ocean.

Next interesting parameter is lapse rate, which describes decrease of temperature with rise of height. The thermodynamic state of a moist air parcel changes through vertical motion. Vertical displacement alters the environmental pressure, which varies hydrostatically.

Vertical motion cooling off water vapor and at some point start condensation, which is point of saturation or Dew point, and change it's state to water. This process described by dry-adiabatic gradient and moist-adiabatic gradient.

Under saturated conditions, the adiabatic description of air breaks down due to the release of latent heat that accompanies transformation of water from one phase to another. This is describes as LCL. LCL is formally defined as the height at which the relative humidity (RH) of an air parcel will reach 100% when it is cooled by dry adiabatic lifting. 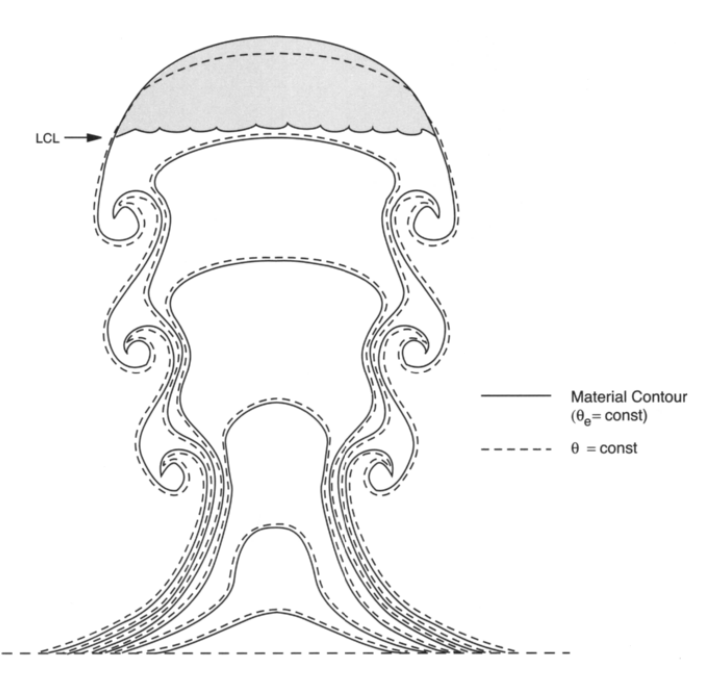 Based on this information, we can now understand that higher RH means that in air mixture exists more water particles, which evaporate from water around. With rise of temperature air floats up in atmosphere where it's condensate due to adiabatic law and water particles change their state and organize clouds, if in this period of time came cyclone, which is area of low pressure, there will be no forces to maintain cloud condition, which leads to rainfalls. Note, that clouds can be created in one place but move to significant distances.

Information gathered from Fundamentals of Atmospheric Physics by Murry L. Salby and couple of books about meteorology in Russian.

Not the answer you're looking for? Browse other questions tagged thermodynamics weather climate-science or ask your own question.