For the Kerr metric, does taking the maximal analytic extension commute with taking the zero-spin limit?

The Schwarzschild metric for an eternal non-rotating black hole is a special case of the Kerr metric for an eternal rotating black hole. But the Penrose diagrams for the maximal analytic extensions (MAEs) of these two spacetimes look qualitatively different from each other, as shown in sections 2.4 and 4.2 in https://arxiv.org/abs/gr-qc/9707012. Is MAE-Schwarzschild somehow still a special (or limiting) case of MAE-Kerr, despite this qualitative difference? Are there any simpler examples to illustrate this?

I understand that we don't expect these eternal black hole solutions to have direct relevance to astrophysics, but I would still like to understand this mathematical aspect of GR.

Since Penrose diagrams are a bit abstract, I'll add some spice to the question by relating it to the fates of infalling test-objects. When a test-object falls into a Schwarzschild black hole, it hits the singularity in a finite proper time. A test-object falling into a Kerr black hole along the axis of symmetry has a different fate. If I'm not mistaken (please correct me if I am), the infalling object never even reaches the plane of the ring singularity. Instead, it turns around and falls back out (by crossing a white hole horizon in the MAE), then falls back in (by crossing a different BH horizon in the MAE), then falls back out, then back in, and so on forever. This is qualitatively different than the fate of the test-object in the Schwarzschild case. Can the behavior of the test-object in the the Schwarzschild case be understood as a special (or limiting) case of the behavior of the axially-falling test-object in the Kerr case?

For the global structure of spacetime one should remember that while Penrose diagrams are useful tools, they do leave out a lot of information. In case of Kerr geometry, they do not give idea about how the geometry varies with varying spin parameter $a$. As $a$ approaches zero, the radial sizes of inner features of the Kerr metric: the inner horizon, ring singularity, CTC region and inner ergosphere all go to zero, while the values of curvature tensor at these features diverge. So if we ascribe to our test observer some realistic features such as a finite size and a maximal value of spacetime curvature she might endure before being destroyed, then no matter what values we choose, for a given mass of a black hole there would be a minimal value of $a$ for which there are trajectories that enter the black hole and leave the white hole in a parallel universe such that observer could survive the travel. For all smaller values of the spin parameter the observer would be destroyed by encountering a region of high curvature. 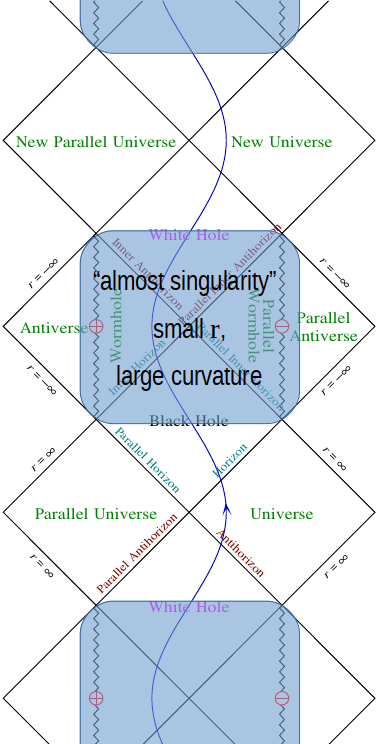 This countable sequence of universes could be seen as an analogue of real function becoming multivalued/defined on a Riemann surface with multiple sheets once lifted to a complex values. This analogy is made precise by the Newman–Janis procedure that allows one to “derive” Kerr metric from Schwarzschild's via a complex transformation of metric/tetrad. To read more about it I recommend a paper

or a recent non-paywalled review by H. Erbin or a simplified version of the Newman–Janis algorithm discovered by Rajan & Visser.

Not the answer you're looking for? Browse other questions tagged general-relativity black-holes or ask your own question.

10
How does an object falling into a plain Schwarschild black hole appear from near the black hole?
9
Falling into a black hole
8
Spacetime diagram of a collapse of a rotating star
5
Does the maximally-extended Schwarzschild horizon see the entire past of the parallel universe?
14
How does the Penrose diagram for a spinning black hole differ in realistic scenarios (formed by stellar collapse)?
4
If, for outside observers, infalling matter never enters the black hole, what happens to the matter's gravity?
4
What's the proper distance from the event horizon to the singularity?
1
Path of a particle spiraling into a black hole
3
Does the physical singularity of the Reissner-Nordstrom metric have a ring structure?