Motion of a contrail “vortex” 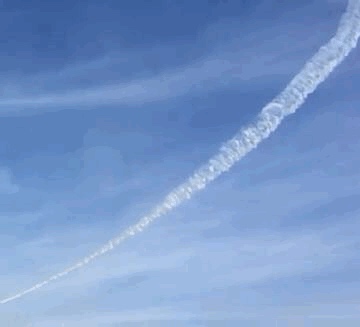 I want to understand what causes this motion on contrails (Cirricular motion) and it’s name if possible. What effects it? How and why is it formed?

I will assume that what you mean by the circular motion is the motion of the contrail around its long axis.

As originally formed, the contrail in your picture does not have any circular motion in it because it was created by the hot steam in the exhaust streams shooting out of the tailpipes of the plane's engines.

Not the answer you're looking for? Browse other questions tagged atmospheric-science aerodynamics aircraft vortex or ask your own question.

6
atmospheric phenomenon? What causes condensation trails to converge?
4
how to determine if a vortex is laminar or turbulent
9
How do you calculate vortex shedding frequency?
0
What is the mechanism of vortex angular acceleration?
2
Does a whirlpool(vortex in water) continue in air(vortex in air),and when does a vortex stop?
4
Why is the eye of a cyclone a forced vortex?
2
How do you explain the formation of shockwave on the wing surface during near sonic flight?
2
Why do cyclones have translational motion?
2
Would a supersonic object without a combustion power source leave behind a contrail?