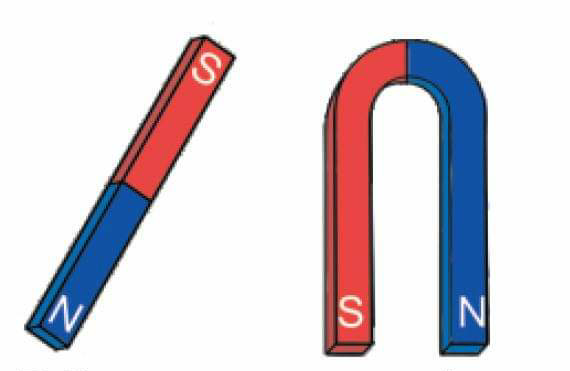 My question is, one of them is iron and the other is a magnet. It is forbidden to break. However, it is desired to determine the magnet without using any other objects. How can I find , which is iron or magnet?

I learned that the following method is wrong.

If both are attractive, then it is iron on the left.

Is my method correct?

Place the bar "magnet" between the poles of the horseshoe "magnet", perpendicular to the plane that contains it.

Now move the bar along its axis. If the bar is actually a magnet, the field is the strongest at the tips of the bar, so the greatest magnetization of the horseshoe bar (and therefore lowest energy state, by E = - m . B) will be roughly when either tip of the straight bar is closest to the horseshoe bar.

If, otherwise, the horseshoe bar is a magnet, the magnetization is greatest, roughly, when you maximize the volume of metal between the poles, so the lowest energy state will be when the straight bar is in the midpoint.

If you have another magnet, one end of that will repel one end of the magnet, but it will attract both ends of the iron.

If you have another piece of iron, it will be be attracted to the magnet, but not the iron.

You can't say that using this method. Iron will be attracted by any pole of magnet. Using your method only determines that one of these is made of iron. So this is not a good idea. Instead use them on any other non magnetized object made of ferromagnetic material. The one which doesn't attract the object is made of iron.

Too bad that you can't use any other objects. Otherwise, I would simply put both of the items into any nearby dirt or sand and rub them around for a minute or two. Whichever of them comes back coated in little pieces of iron--which is present in almost any amounts of natural detritus that would have broken down into those natural substances--that would be the magnet.

Take the 1st (A) object, bring one end of it to the middle of the 2nd one (B). Note if there's a significant attraction.

Then, bring one end of B to the middle of the other one, also noting if there's significant attraction.

The magnet has it's magnetic field least pronounced in the middle, regardless of actual shape. If one object strongly attracts the other while touching the middle of the other one, the former one is most likely magnetic.

BTW, this riddle is old as the world itself:

2
How to tell apart a permanent and induced magnet which are otherwise identical?
3
How can I use a magnet to lift a paperclip?
1
What happens with this magnet/current system?
1
How is the third case obeying integral form of Maxwell's second equation?
3
Can a permanent magnet attract things permanently? If yes, then doesn't it violate law of conservation of energy?
1
If I put an iron nail bear a magnet, a magnetic field would be induced in the iron nail
0
Is this a correct way of finding magnetic field of a magnet created with Wasilewski's method?
0
What will happen if current can travel through the soft iron core of a transformer?