In many scattering process evolving composite particles such as proton, the composite particles are treated as an elementary particles. For example in electron proton scattering to the proton is attributed the Dirac spinor operator. Is there any mathematical or physical reason why such an approximation can be made? I would appreciate some link to textbooks or articles if it is possible.

Recall that in Scattering theory one has in- and out-going states, which are approximated as free particles (this is not approximation for the proton, which is stable for all we know). The two assumptions justifying this approximations are

1) The lifetime of all asymptotic states should be much larger than the timescale on which interactions take place.

2) The particles should be asymptotically non-interacting. This is problematic for electromagnetic interactions, as they are long-ranged.

One may now assume the principle of asymptotic completeness. This means that the in-states span the Hilbert space of the theory, as do the out-states. The most important case where this fails if there are bound states in the theory which have not been included in the in-states.

This is an argument from the book by Streater and Wightman ("PCT, Spin-Statistics and all that", Chapter 1-4, "Relativistic transformation laws of states", p.26/27): 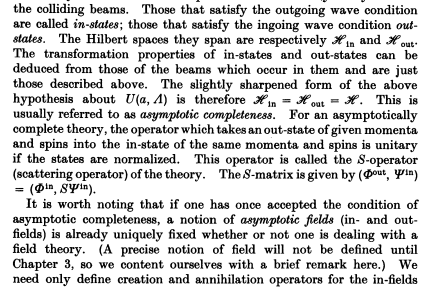 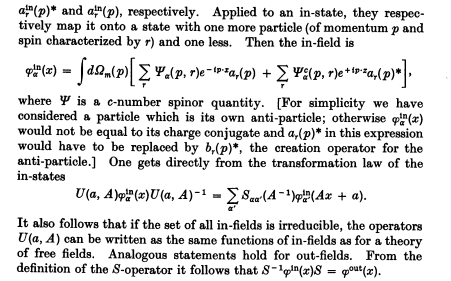 The important part is that this doesn't tell you much about the scattering dynamics and which action they stem from. As the asymptotic fields have to be Dirac fields, there has to be a Dirac kinetic term, but then there will be general interactions, non-renormalizable and strong, so this is in general not helpful.

There is a note on that also in Chapter 10.7 of Weinberg's book (The Quantum Theory of Fields, Vol I, p.461/462); here $Z$ is the wave function normalization constant: 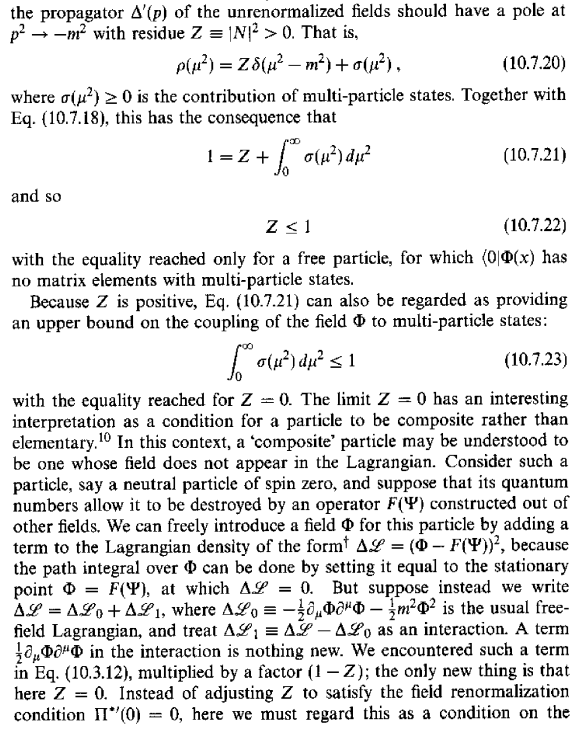 This then touches to an earlier answer, i think which talks about a framework in which one may actually get predictions out.

Now consider a composite particle like a proton (or neutron, etc). If the energies involved are low enough, much lower than the rest energy $mc^2$ of the proton, then pretending that the proton is an elementary spin-1/2 particle can be a good approximation. In this low-energy approximation, we can use a 2-component Pauli spinor field for the proton, just like we can for an electron, simply because the proton has spin 1/2. The NRQED approach can again be used to construct a good Hamiltonian in this approximation, but the coefficients will necessarily have different magnitudes than they would for an electron, to account for things like the proton's (or neutron's, etc) different magnetic moment. In contrast to the electron case, this "low-energy effective Hamiltonian" would not (as far as I know) be a low-energy approximation to any simpler theory in which the proton is treated as a 4-component Dirac spinor. It would, instead, be a low-energy approximation to a simpler theory in which the proton is made of quarks.

This perspective is reviewed in https://arxiv.org/abs/1503.07216, "An Introduction to NRQED". I'm citing this review because it specifically emphasizes how the NRQED method is used to treat composite spin-1/2 particles (like protons) as though they were elementary. The introduction says, "NRQED has been traditionally applied to point particles such as electrons and muons. ... But NRQED can also be used to analyze the interaction of spin-half particle that is not elementary... The purpose of this paper is to demonstrate how the NRQED Lagrangian is constructed."

NRQED, in turn, is a special case of a much broader subject called Effective Field Theory, which is reviewed (together with NRQED) in https://arxiv.org/abs/hep-ph/0506330, "What is renormalization?".

Altogether, I think one way to answer your question is this: In the low-energy approximation, treating a composite spin-1/2 particle like a proton as a 2-component Pauli spinor field is valid simply because the proton has spin-1/2, and all of its other properties can be accounted for by the many complicated interaction terms in the NRQED Hamiltonian. This works well as long as the energies involved remain low enough. Treating the particle as a 4-component Dirac field would not make things any easier; the only way to get a simple model that works at higher energies is to treat the proton as composite.

Not the answer you're looking for? Browse other questions tagged quantum-field-theory approximations or ask your own question.

19
What's the deepest reason why QCD bound states have integer charge?
26
Dirac spinors under Parity transformation or what do the Weyl spinors in a Dirac spinor really stand for?
3
Exact solution to electron-electron scattering?
7
How would we know that Dirac equation does not describe composite spin-1/2 fermions?
5
Going from the QED Lagrangian to low energy Hydrogen scattering