How can high voltage create ions?

So I was reading about Tesla Coil propulsion and Ion Thrusters. The thing I don't understand is the following:

It is just a matter of energy. If the field is strong enough, electrons manage to gain enough energy to ionize neutral atoms without being captured.

When I tried to understand Tesla Coil propulsion I found an article about Corona discharge. There's an explanation for Ionization with cosmic rays, but that's not the case in Ionization chambers. So can someone please tell me what is actually going on? I'd be very grateful for graphical interpretation!

In a corona discharge, there is only one electrode. When this electrode is charged to a high voltage, it ionizes the air near it. The positive and negative ions start moving in opposite directions, creating a bi-directional ionic wind. The wind, blowing away from the electrode, does not have any effect on it, while the wind, blowing toward the electrode, pushes it. This is one of the simplest forms of the ionic propulsion. 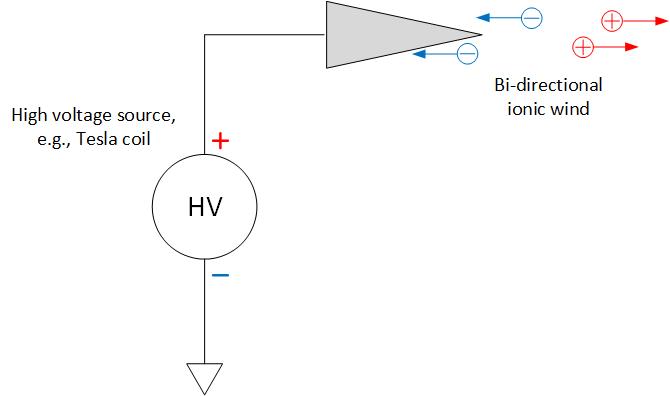 You can observe it in action in this video.

It typically requires some few electron-volts of energy to ionize a given ion. Say 10 eV for example. If, after a collision, an electron is accelerated by the electric field to have a kinetic energy of say 20 eV before its next collision, then it has plenty of energy both to ionize an atom and itself escape. In practice a value between 10 and 20 eV would be sufficient.

Not the answer you're looking for? Browse other questions tagged electrostatics electrons voltage atoms ionization-energy or ask your own question.