Why diodes can be used to create a current-independent voltage drop? [duplicate]

How is current independent of the voltage drop in a diode?

How is current independent of the voltage drop in a diode?

This is a simplification. For instance, at zero voltage, the current of a diode would be zero.

Since in many applications the current of a diode changes in a relatively narrow range, the corresponding forward voltage appears to be almost constant.

As an example, the diagram below shows typical IV curves for LED's. 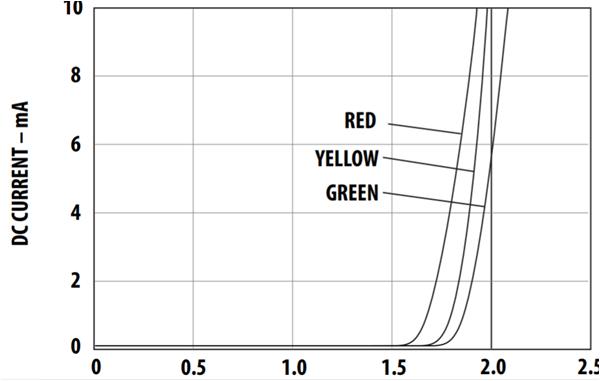 In most practical applications, the current for these LED's would be somewhere between $4$mA and $8$mA, a $2$x range, which corresponds to the forward voltage change of less than $5$%, which may create an impression that the current does not depend on the voltage. Yet, the same IV curves show that at $1$V, the LED current is measured in microamps.

The 'voltage on a diode' can be nearly constant if you establish the operating current and polarity of a Zener or avalanche breakdown diode, OR if you feed a nearly-constant current to the diode in its forward biased polarity.

More complex circuitry, matching a resistor divider output to a resistor-diode output (a kind of Wheatstone bridge with one nonlinear diode element), can be stabilized with a feedback amplifier to make a very accurate voltage reference (limited mainly by the temperature dependence of the diode voltage). Such a bridge-amplifier reference regulates the bias current through the diode, either forward or reverse biased.

And, a third scheme (using multiple diodes with different current denities) can (because of the predictable forward-voltage curve of an ideal diode) generate constant voltage without significant temperature dependence (this is generally called a bandgap reference).

All of these schemes are in widespread use, and it is rare to find any accurate 'voltage source' which does not use a semiconductor diode as its reference voltage.

Not the answer you're looking for? Browse other questions tagged electric-circuits solid-state-physics semiconductor-physics electronics electrical-engineering or ask your own question.