How do orbitals exist in an atom?

I have come across a picture online which talks about 1s,2s,2p orbitals of a sodium atom. 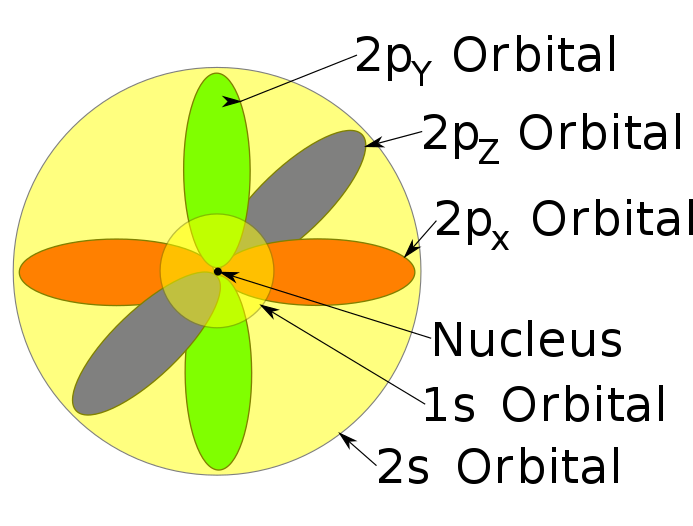 Observation:In the picture we see some volume of space in common to two orbitals.

For example:The circled(red) region is common to both 1s and 2py orbitals 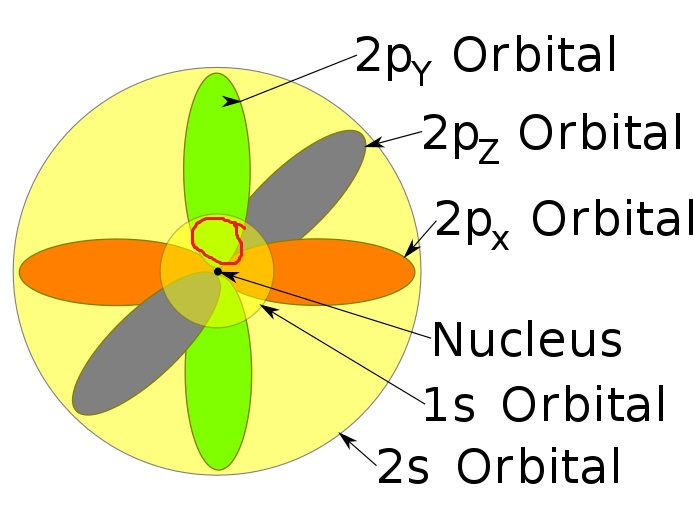 My opinion about the observation: The common volume to two orbitals makes sense even when we consider the 3-Dimensional structure of an atom.

How it makes sense?

The S orbital is spherical in shape and P orbital is in dumb-bell shape. So,some region of P orbital will lie in s orbital also(as both orbitals are present around the nucleus).

According to the knowledge I have in Quantum mechanics: An electron can occupy only one orbital at any given instant i.e for example,it can either be in 1s or 2p but definitely not in both the orbitals.This is because the two orbitals have quite different energies.

My level of knowledge: I can understand high school level Quantum mechanics and a little beyond.I can understand wave particle duality of matter and the concepts of probability densities.

Reference for the picture:

There is a good answer here already, but there still seems to be some confusion, so I will give my input as well.

The regions in your diagrams correspond to the "most likely place to find the electron" if if was just in that state. Furthermore, the regions are defined by some threshold probability of finding the electron at that location. So technically, all orbitals "overlap", because the probability amplitude is defined for all of space. We just make these diagrams by only showing the most probable regions.

The issue you seem to be having is that the "location" of the electron determines which orbital it is in. The opposite is actually the case. The orbital that the electron is in determines it probability amplitude in the position basis.

Therefore, there are multiple reasons (probably more than I have just said) to be fine with "overlapping" orbitals

Okay, now I get you. I'll try to explain your question in the comment in simple terms.

If we agree to the fact that 1S and 2P orbitals have different energies then the volume of space common to those two orbitals cannot exist as they have quite different energies,but from the picture and 'my opinion about the observation' it seems like they do.That's the anomaly.I'm just asking how do you explain the probability of finding an electron in the volume of space common to two orbitals.

Note, however, that it is extremely difficult (and "dangerous") to try to explain it to someone who doesn't know much more than high school QM, but I'll try.

Yes. Well, we don't just "agree", that is just true, and it can be shown. That's right.

What? How comes a volume cannot exist? The volume is a real 3D volume. It might be empty, but it exists.

I'm just asking how do you explain the probability of finding an electron in the volume of space common to two orbitals.

This is more complex, and it requires further knowledge of QM.

So, how do we measure things? Regardless of how scientists manage themselves to develop the appropriate instruments, measuring is "revealing" some unknown information. For example: where's the electron? Take a picture and find out. "Oh, it was here".

Unlike classical mechanics (CM), Quantum mechanics (QM) are random. That means position won't be always the same, even in the same system. There's essential randomness.

So let's get to the point. Imagine you want to measure the "state". That means measuring the quantum numbers of the electron, so that you can say "oh, this is a $1s$ orbital" (let's neglect the spin for now).

So you have an atom, you use the whatever-meter and you find out that the electron was in $1s$.

You can measure another electron being in $2p$, with $m=0$, for example.

In QM, it is possible to have a "linear combination" of $1s$ and $2p$. In that case, you'll sometimes measure $1s$ and sometimes $2p$. It is random, but there is a well-defined probability of measuring each one. The probability depends on the concrete entanglement you have.

So that's a more elaborate answer to the first thing: the same electron can be found in $1s$ or $2p$, depending on your luck. This is weird to newbies, but it is basic QM.

This is just to set up some ideas. However, this was not your question. If I understood well, your question was how can an electron be in a "shared volume", right?

Well, that's because the orbital is not exclusive of one level, as you can see in the picture.

The orbital you see there is "the volume in which it is likely to measure $2p$".

You must associate the quantum numbers to the electron, not to the volume. The volume is free land, and the state (Quantum numbers) belong to the electron. So an electron can move around a $1s$ orbital. That only means that "the electron is in a volume in which $1s$ electrons are likely to be there".

So it is like a tourist visiting another country, or a land shared by two countries. The thing is that, when we make a measurement, we're asking the electron for its passport, and then we see if it was a $1s$ or a $2p$.

(To be precise, after showing you one, it will remain being that one forever. After a measurement, the "system" picks only one and stays with it. The surprising thing is that identical systems, strictly identical, can show any of those passports, randomly.)

So this is all. Hope I helped.

An electron can occupy only one orbital at any given instant i.e for example,it can either be in 1s or 2p but definitely not in both the orbitals.This is because the two orbitals have quite different energies.

That is quite correct for orbitals defined by the principle quantum number n, identified with the energy eigenvalue in the simple quantum mechanical solutions for the hydrogen atom, and mathematically extrapolated to electrons in atoms and molecules.

Note that $n$ is connected with a wavefunction, it is the complex conjugate square of the wavefunction that defines the orbitals, i.e. orbitals are a probability distribution, giving a value on how probable it is to find the electron at a particular (r,theta,phi).

Note that all s states, i.e zero angular momentum, have a probability of existing around r=0. This does not mean that they have the same energy, because the quantum mechanical solution for a potential just give probabilities.

In proton rich nuclei, electron capture can happen, because in such nuclei there is a large enough probability for s state electrons to overlap with the probability distribution of a proton, and the proton changes into a neutron and a different nucleus . It is a complicated process which exists through the probabilistic nature of quantum mechanics.

The figure that you give should not be taken too literally. It plots the orbitals as having a constant value in space. In reality there are positive and negative, in general complex valued regions. Two orbitals are different if they are orthogonal, that is, if the integral over all space of their product is zero. Since this one grand can have any sign, thus does not require that one orbital is zero wherever another is nonzero.

Not the answer you're looking for? Browse other questions tagged quantum-mechanics atomic-physics atoms orbitals or ask your own question.

22
What does an orbital mean in atoms with multiple electrons? What do the orbitals of helium look like?
3
Do the hydrogen atom's electron orbitals have Gaussian probability density functions?

4
How does electron excitation relate to atomic orbitals?
3
Is it that electron of an atom can be found anywhere in the space?
4
Would an $H_2O$ Molecule actually look like this 3D representation if we could see it?
1
Why can only orbitals of similar energy interact significantly?
0
What's the difference between an orbital and an energy level? Are they the same thing?
4
Why do electrons in an atom only occupy stationary states, without superposition?
0
Why does a neutral atom not have a dipole moment?