Why does the length of a pendulum cause different natural frequencies of pendulums in Barton's pendulum?

My question is, why does the length of a pendulum cause different natural frequencies of the pendulums?

An oscillator undergoes fee vibrations when no external force acts (i.e. undamped e.g. no air resistance); when a system is displaced and left to oscillate, the system oscillates at a frequency known as the natural frequency. For the case of a pendulum with small oscillations, its period is described by the following formula: $$T=2\pi \sqrt{\frac{L}{g}}$$ where $L$ is the length of the pendulum and $g$ is the acceleration due to gravity $=9.81ms^{-1}$ (see the image below). This arises from solutions to the equation of simple harmonic motion for a pendulum (this requires knowledge of calculus), and there are many derivations online, for example here and here. However, the relationship makes sense intuitively - imagine short and long pendulums freely oscillating next to each other; the long pendulum will oscillate slowly, taking longer to move through some angle $\theta$. Likewise, the dependence on the strength of the gravitational field $g$ is intuitive - as $g$ increases the restoring force increases (the force which returns the pendulum to the equilibrium position), and so less time is taken to return to the equilibrium position (lower period).

Barton's pendulums demonstrate a different aspect of oscillatory behaviour, resonance. When an oscillator is not left to freely oscillate (as was assumed above), but is instead driven by some periodic force at a frequency $f$ (i.e. we apply oscillations to the oscillator at a specific frequency), then the oscillator will now be forced to oscillate at frequency $f$, undergoing forced vibrations. This can be understood by considering what happens when a child on a swing is pushed - the swing itself will oscillate at some natural frequency $f_0$ when displaced and left, but when we push it it will now be forced to oscillate at $f$. At some values of $f$ (e.g. if we push it very rapidly or very slowly) the swing will only have a small amplitude of oscillation (does not oscillate with a large displacement), but at other values the swing will keep getting higher and higher. The higher and higher phenomenon is known as resonance; at resonance the driving force continually supplies energy to the oscillator so the amplitude of oscillation gets bigger and bigger, limited only by the damping forces (the air resistance and friction here). It can be shown (again, calculus based) that this pehnomenon occurs when the applied driving frequency $f$ is equal to the natural frequency of the system $f_0$ i.e. resonance occurs when $f=f_0$. Consider the image of Barton's pendulums below: 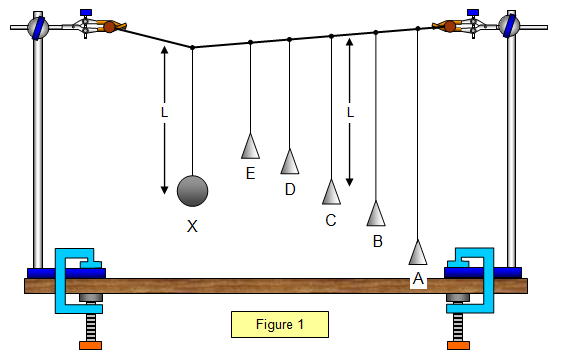 When the pendulum bob $X$ is displaced, it oscillates at its own natural frequency $f_{X,0}$, which depends on its length. This exerts a driving force on the other pendulums via the connecting string, and so these undergo forced vibrations. As described above, these oscillations will be greatest (resonance occurs) when the natural frequency of the pendulum bobs matches $f_{driving}=f_{X,0}$. Since pendulum $C$ has the same length as $X$, its natural frequency $f_{C,0}=f_{X,0}$, and so it oscillates with maximum amplitude. The other pendulums have some other frequency and so just like when we push a swing too quickly or too slowly these oscillate with less amplitude.

Interestingly, the pendulum with the same length as the brass bob will coincidently have its natural frequency as the bob's driving frequency, could this be explained?

I assume that you want to understand why it is so without solving the differential equation of a pendulum, which yields this formula.

A possible explanation could be based the energy conservation for a pendulum, which shows that the potential energy of the pendulum in its highest point is equal to its kinetic energy in its lowest point: $mgh=\frac {mv^2} 2$.

Not the answer you're looking for? Browse other questions tagged waves harmonic-oscillator oscillators resonance or ask your own question.