What is the experimental evidence that the nucleons are made up of three quarks?

What is the experimental evidence that the nucleons are made up of three quarks?

What is the point of saying that nucleons are made of quarks when there are also gluons inside it?

The reasons this is done is called in the field of science communication "lies to children".

Complex topics are often initially taught in a manner the oversimplifies the reality in order to develop key salient points.

Emphasizing the quark composition of the nucleons while ignoring the gluon contribution allows one to explain many key conclusions of the quark-gluon model including:

The existence of gluons as a constituent doesn't have to be explained in detail to reach these results.

Note that the original SU(3) quark model was entirely mathematical (The Eightfold Way) and was a brilliant way to explain the observed spectra of baryons and meson. The whimsically named quarks were not intended to represent real objects.

Per @Geoffrey's answer, it was Deep Inelastic Scattering:

to indicate initial (known) states are an electron impinging on a proton and the final state is a detected electron and undetected debris ($X$). This is called "inclusive" deep inelastic scattering.

This was initially done at SLAC, with an electron beam, a liquid hydrogen target, and 3 spectrometers, not whimsically named the 1.6 GeV, the 8 GeV, and the 20 GeV spectrometers. 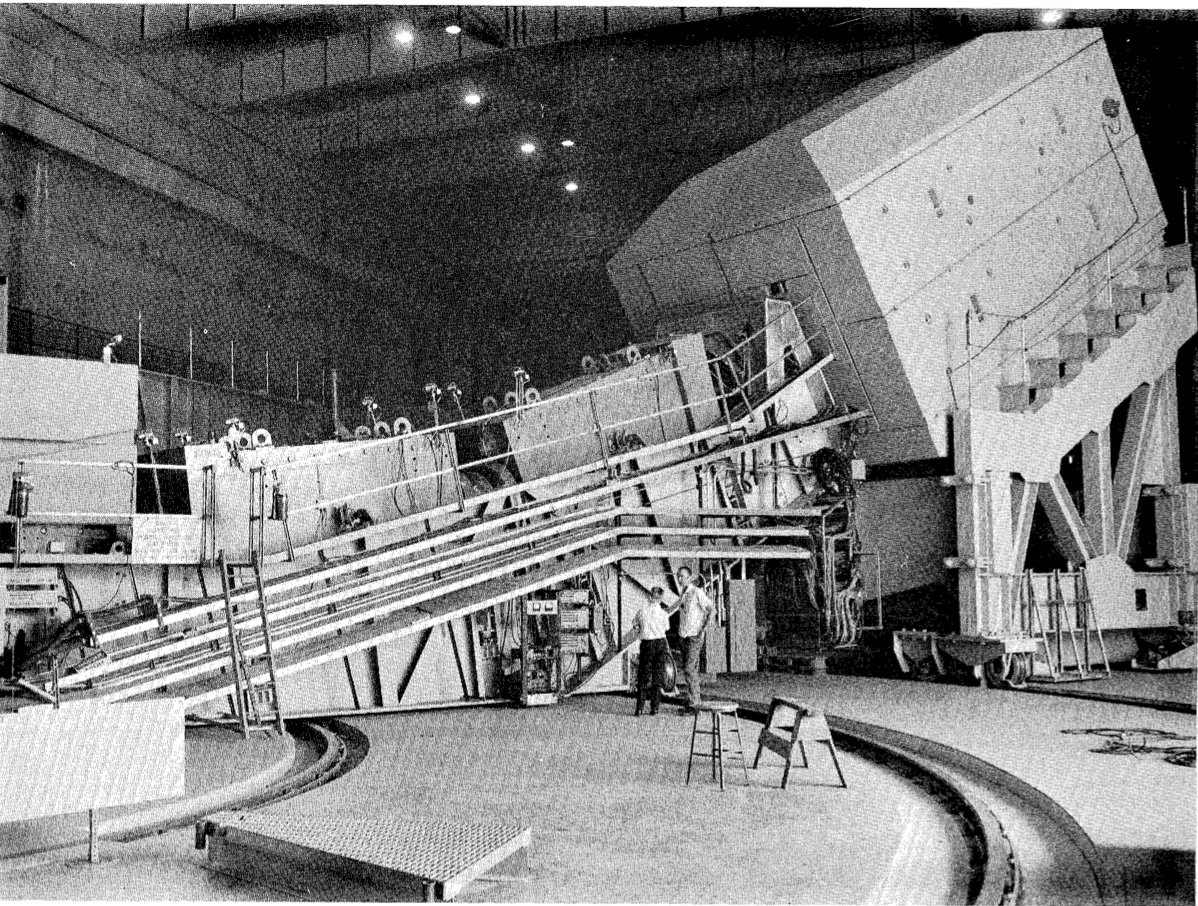 With a well defined beam energy (4-momentum $k_{\mu}$) and scattered electron (4-momentum $k'_{\mu}$), the interaction could be analyzed in terms of the exchange of a single virtual photon with 4 momentum:

and its invariant mass:

where the latter expression holds in the lab for energies much greater than $m_ec^2$.

Note that the length scale probed by the scattering event is $ \hbar c /\sqrt{Q^2}$.

The energy transferred to the target was also an important parameter:

From these two variables, one can construct something called Bjorken-$x$:

and this is the variable that provided key evidence that quarks are real, and that there are 3 of them in a proton.

Note that $0 <x \le 1$, and it represents the fraction of proton momentum carried by the struck Parton (which is whatever is inside the proton). The scattering cross section shows a broad peak around $x = \frac 1 3 $, indicating whatever is struck, carries about one third of the proton momentum. This is interpreted as a proton being roughly (very roughly) a bag of 3 non-interacting particles. (Of course they interact to form a bound proton, but the analysis is done on the so-called light-cone, in which the scattering takes place over a timescale much shorter than any interaction: the proton appears as a bag of 3 free valence quarks plus sea quarks and gluons).

The scattering behavior (when properly analyzed via "structure functions") showed very little dependence on $Q^2$--that is it was scale-independent, indicating that the partons we're point-like: they were in fact quarks.

Since then, more sophisticated experiments have only continued to confirm the quark-model. There are semi-inclusive experiments, e.g.:

where the scattered electron is detected in coincidence with some part of the final state (here, a pion). These sorts of reactions allow the study of "hadronization", or how a struck quark (with color) turns into a color-singlet hadron. One can also isolate the strange-sea my looking at coincident kaons.

There have been polarized scattering experiments at SLAC and DESY (with a polarized beam and target):

confirming the spin 1/2 nature of quarks. Finally, there are exclusive experiments (where everything is known), such as:

at high energy which shows through dimensional scaling that a deuteron, a neutron, and a proton behave like a bag of 6 point particles going to 2 bags of 3 point particles (confirming the quark model).

Note that there are various tricks (combining multiple measurements) that allow the separation of the structure functions into valence quarks, sea quarks, and gluons. The fact that there are an infinite number of sea quarks inside a proton does not really impact the fact that protons contain 3 valence quarks. Yes, QCD is strong, so that most of the actual mass of a nucleon is binding energy--one can still confidently say there are 3 quarks in a proton. The sea quarks are just quantum fluctuations.

Likewise in QED, there are electron-positron pairs inside a hydrogen atom (c.f., the Lamb shift), but we can still describe a hydrogen atom as a bound proton and electron when discussing what it is made from. Of course, when doing precise calculations in QED (or any calculation in QCD), you have to pay attention to the "sea" objects.

You are right to question the idea that a proton is "made up of three quarks" when there are gluons inside as well. The gluons are of course force-carrying particles which mediate the strong force and keep the quarks bound to one another, but because the gluons carry color charge themselves, they couple in strongly non-linear ways. The upshot is that most of the mass of a proton comes from the interaction energy of the gluons.

When I was in university, sitting on my dinosaur, one of my profs mentioned he worked on a neutron polarization system on a particle accelerator at Chalk River.

I had to ask how you polarized a neutral particle with a magnet, still thinking in terms of classical particles and charges. He explained that since there's an internal quark structure, even though the outside looks neutral there's enough asymmetry for you to work with.

It was not until much later that I read how these actually work, there's complexity of course, but the basics are there.

For the second part of your question:

(Virtual) gluons are part of nucleons in the same sense that (virtual) photons are part of the atom as a whole. You don't need to talk about them because they are implied in the strong and electro-magnetic interaction respectively, and unlike the electrons and protons and quarks, they are uncountable - that is, a protium atom always has one electron and one proton made of three quarks, but there isn't even any meaningful number of the virtual photons and gluons. Don't think of virtual particles as "this could have been a real gluon, but isn't" - they are excitations in their corresponding quantum field that don't follow the rules for particles in that field.

Don't try too hard finding a "yes-no" answer to anything in physics - most of the answers are more like "Yes, but...". There can be hundreds of implied conditions in anything you learn about anything (one good reason why you need to slowly build up on strong foundations, rather than just skipping to some random interesting physics topic) - e.g. do relative velocities combine additively? Yes (as long as we're talking about e.g. cars on a road). No (if you're talking about e.g. high energy particles hitting Earth's atmosphere). This exists in probably every single physics question, so the ", but..." is always implied - little need to keep carefully reminding people of it beyond their introduction to science in general.

For the first part, I'd just add to the already existing great answers: three quarks aren't the only explanation, of course. Another way of looking at the problem is that the (e.g.) proton is made out of thousands of quarks and anti-quarks that are constantly created and annihilated, and if you add them all up at any given instant, you get three more quarks than anti-quarks. Except for their energy (which contributes to the mass of the proton as a system), they almost entirely cancel out except for the three "extra" quarks. There are many ways of looking at this picture as well - some consider the "cancelling" quarks to be real particles, some consider them to be virtual particles and some see an interplay between virtual quarks and gluons. Needless to say, all those alternatives predict the exact same outcomes for any typical chemistry question - we're talking about differences that are either tiny for any practical purposes, or possibly even just a mostly meaningless semantic debate (does a falling tree make a sound if nobody hears it?).

The above citations reference deep inelastic scattering as evidence that the nucleons are composed of three point-like constituents. They assume that these must be "quarks" - the fermions that carry a color charge. Unfortunately, given the fundamental properties of the quarks, the QCD theory fails at calculating any property of the nucleons except their electric charge. Ask a theoretical physicist why this is so, and they'll answer "because the theory is mathematically intractable." So in the broader sense, the constituents of nucleons are "quarks" only by political consensus.

The way out of the rabbit-hole is the way out of every road-block in theoretical physics: discard the assumption that the fermions are fundamental particles. Explore models that assume they have discrete structure.

Not the answer you're looking for? Browse other questions tagged particle-physics nuclear-physics quantum-chromodynamics quarks protons or ask your own question.

109
What's inside a proton?
5
Why are there 3 quarks in a proton?
5
If quarks don't exist individually how can we say baryons are made up of three quarks?
3
How experiments differentiate between valence quarks and sea quarks

34
Is it pions or gluons that mediate the strong force between nucleons?
5
What evidence is there of the existence of quarks?
0
Properties of the nucleons and the nucleus from the interactions between quarks and gluons
5
If quarks don't exist individually how can we say baryons are made up of three quarks?
3
How experiments differentiate between valence quarks and sea quarks