Recently been working with Hooke's Law at university.

My experience of real springs tells me that stretching to a certain point causes the spring to lose "springiness". (Not sure if "elasticity" is the right word.)

My question is this: Does this loss in springiness correspond to a change in the spring constant, or a translation of $x$.

For bonus credit: Can the value of this change be calculated?

It sounds like you're describing yielding, or the permanent deformation of a ductile material. During yielding, the linear relationship between force and displacement breaks down: 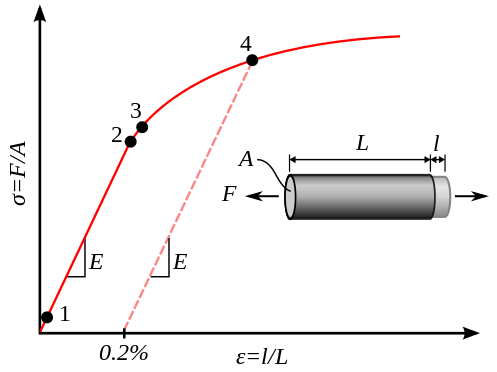 Here, linear elasticity holds from points 1 to 2. From 3 to 4, the material is permanently deforming while continuing to store elastic strain energy.

To begin to address your question, after we release the relatively large load that took us to point 4, the material would exhibit the same stiffness. That is, the dotted line has the same slope as the line between 1 and 2. The sample is slightly longer but pretty much as stiff as it was before. (Large amounts of plastic deformation might affect the stiffness through the introduction of immense numbers of dislocations, but such a change would have a much larger effect on the strength than the stiffness. The stiffness of metals we make springs out of arises from the stretching of the constitutive atomic bonds, and these are largely unaltered as long as the material remains intact.)

Some complexities arise with a coiled spring, however. Strictly, we're not applying Hooke's Law in this case. Hooke's Law describes the linear relationship between uniaxial stress and uniaxial strain, as mediated by Young's modulus and shown in the idealized plot above in section 1-2. In contrast, coiled springs undergo torsional deformation, as mediated by the shear modulus: 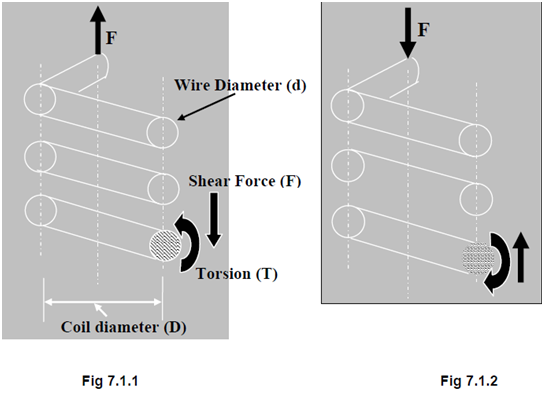 Regardless, we're still talking about a linear relationship; the shear modulus is related to Young's modulus through Poisson's ratio, which also remains largely unaltered.

A more important consideration in the case of the coiled spring is that the permanent deformation might stretch out the coils:

Now any further stretching involves tension as well as torsion. I don't know of a general equation for such an altered spring constant. Finite element analysis might be required. But you can expect an increase in the spring constant, sharply so as the coils straighten.

Not the answer you're looking for? Browse other questions tagged newtonian-mechanics material-science spring elasticity or ask your own question.