I'm having a hard time trying to understand the conservation of angular momentum. Let's assume the following 2D experiment: 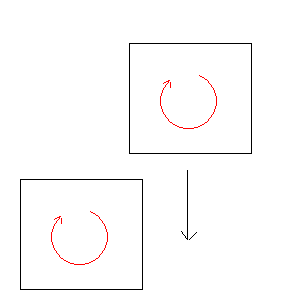 Here are the details. Label the two objects $1$ and $2$. Suppose, when they collide, that their centres of mass are at $\vec{r}_1$ and $\vec{r}_2$, relative to some fixed origin of coordinates. The point of contact is $\vec{r}_c$ and, at that point, a force acts between the two objects, changing the momentum of $1$ by $+\vec{p}_c$ and the momentum of $2$ by $-\vec{p}_c$ (Newton's third law). Then the change in total angular momentum has four parts to it:

These sum up to zero.

Not the answer you're looking for? Browse other questions tagged angular-momentum or ask your own question.