Say there is a solid bar in space. Imagine it vertically, with the top point labeled $A$, and the bottom point labeled $B$ (these aren't points on the bar, but points in space between which the bar originally is situated).

We smash a rocket into the side labeled $B$, giving it a small amount of momentum. We know that because the mass was hit off center, it will rotate, and because the entire bar has momentum, it will move forward.

However, will the top part of the bar, the part that starts off at the point labeled $A$, ever be horizontally behind $A$ as the bar starts moving forwards and spinning, or will it allways stay in front of it, meaning that the bar moves forwards before it has a chance to spin its topmost point behind $A$, and why? 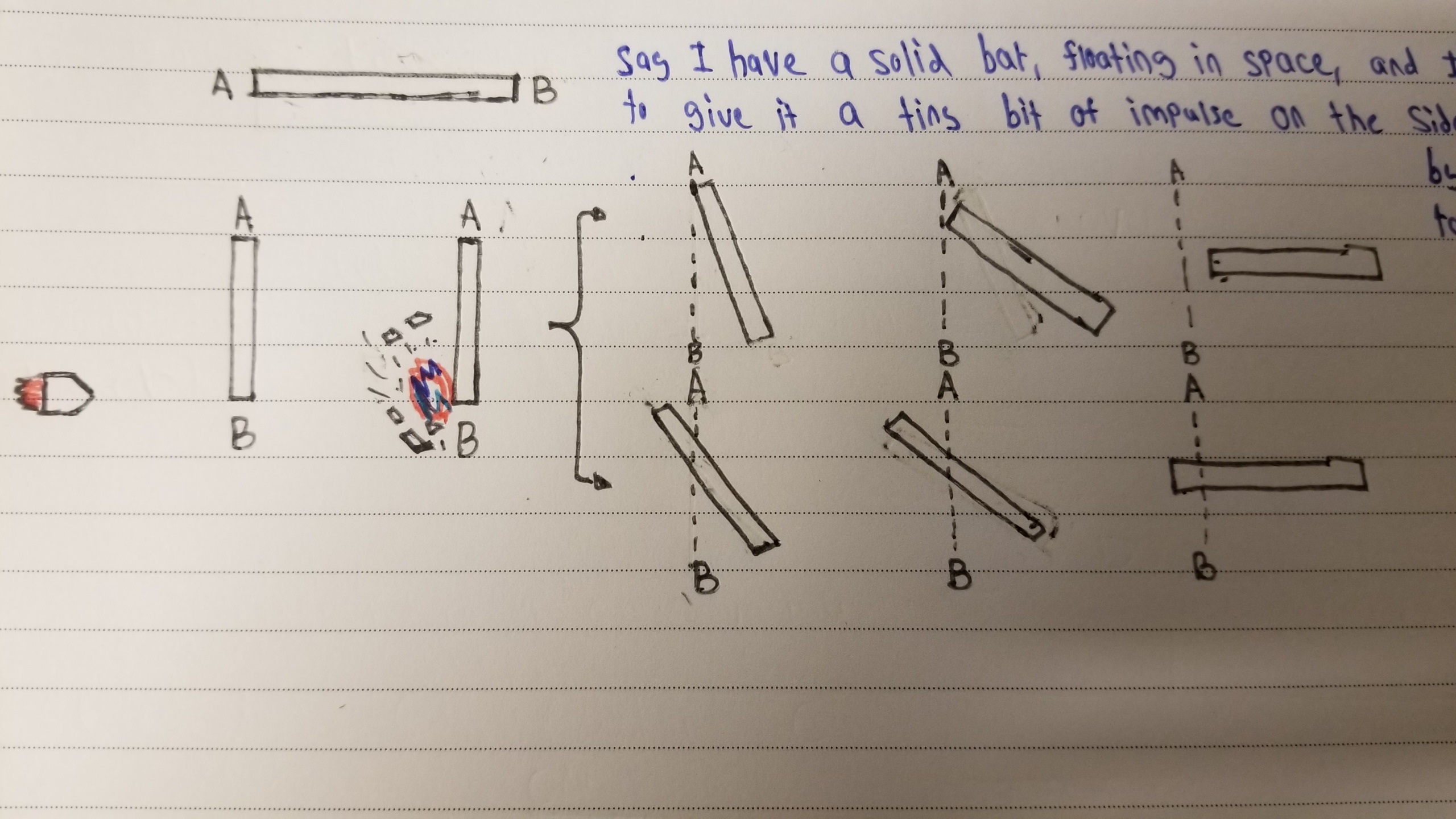 Edit after closed for not enough effort (sorry, I thought I had put my reasoning in before, I'll put it in now!):

My thoughts are these. When something is hit off-center, the reason it spins is because one side of it accelerates before the other does, since it received the momentum before that momentum spread to the other side.

Now, if we were to hit the bar in the center of mass (and let's say its a uniform bar so smack in the middle), obviously the top part of the bar wouldn't move behind A. That wouldn't make any sense, since both sides would accelerate at the same rate.

Therefore I think its the top situation.

However, I'm not sure, and would appreciate some comments and responses!

First, the bar has mass $M$ and length $l$. The rocket has mass $m$ and initial speed $v_i$. We need to conserve linear and angular momentum. If we use the center of the bar as the reference point, we have at the moment before collision,

The rocket also has a kinetic energy of

Now, "smash the rocket" is open to interpretation. If we assume the rocket bounces off elastically, we have conservation of kinetic energy, so,

And we also must conserve the two momenta, so,

In total, we have

Now, in order to not cross point A ever, the end of the bar has to be moving with a positive horizontal velocity after the collision. That is,

However, we can quickly see by rearranging eqs. (1) and (2) that in this case,

and so the condition you seek cannot be met with an elastic collision.

For a perfectly inelastic collision, the rocket sticks to the rod after collision. You can solve by calculating the new moment of inertia of the system and again using conservation of linear and angular momentum. Maybe it is then possible to meet this condition...

Not the answer you're looking for? Browse other questions tagged homework-and-exercises angular-momentum rotational-dynamics collision or ask your own question.

3
What happens to a rotating rod that breaks in two?
1
When conserving angular momentum, about which point(s) should it be calculated?
1
When will the pringles can fall?
1
Maximum acceleration to prevent rotation of body when held by a gripper
1
Rigid bar on a pivot
1
Why is the center of mass the pivot of rotation?
16
Why should a motorcyclist hit the brakes to make his motorcycle tilt in midair?
1
Ball inelastically colliding into a bar