I am slightly confused concerning the euclidean section of a Kerr black hole. In page 5 of the following paper https://arxiv.org/abs/hep-th/9908022 it is said that in order to get the euclidean section, we need to set $t \to i \tau$ and $a \to i a$. (They consider general Kerr-Newman-AdS black holes but I am simply interested in Kerr asymptotically flat.) This makes sense because we want to keep the $dt \otimes d\phi$ components of the euclidean metric real. What confuses me is that if we do the analysis of the conical singularities as they mention, we will get the following periodicity for $\tau$ and $\phi$

Edit1: I also have the notion that in lorentzian Kerr, the $\phi$ coordinate has periodicity $2\pi$. When we go to Euclidean, we seem to get this other periodicity: but shouldn't the periodicity of $2\pi$ be preserved as well? At least that is what happens in Schwarzschild. So we would have both \begin{equation} \phi\ \sim \phi+i\beta\Omega_H \end{equation} \begin{equation} \phi\ \sim \phi + 2\pi \end{equation} It also confuses me that this manipulations are usually done based on the coordinate systems and therefore it is harder to get a notion of what it means to 'euclideanize' in a coordinate invariant way. If someone has a coordinate invariant way to talk about this analytic continuation, I would like to hear it.

There is a subtlety in expressing the periodicities of variables, because sometimes, there may be a "shift" or "twist" in one variable as we go along a cycle in the other. This is indeed what is happening here. 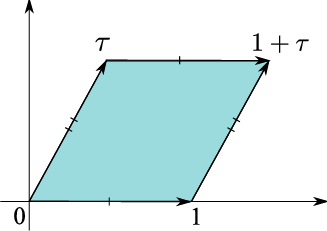 Not the answer you're looking for? Browse other questions tagged thermodynamics general-relativity black-holes differential-geometry kerr-metric or ask your own question.

8
Kerr Metric in Orthogonal form
4
Kerr Black hole EH and Ergosphere embedding
3
Derivation of Teukolsky equation
2
Gravitational Redshift in Kerr Spacetime
8
Black holes in general relativity: angular velocity of the horizon
2
What is the shape of a Kerr black Hole, like in Schwarzschild BH we know it is just a spherical distribution of mass $M$?