Why is the following formula used when we define heat transfer due to convection on a flat plate?:

I read in a book that this expression is derived from newtons law of cooling i.e $dT/dt=-k(T_s-T_\infty)$, where $T_\infty$ is the temperature of surroundings?

One reason why $T_\infty$ is used, rather than the temperature at any other point in the fluid is because that is how the coefficient $h$ is defined. $h$ is defined as the amount of heat that is transferred per unit difference in temperature between the plate and the free stream fluid. It would be possible to use a different temperature than $T_\infty$, if you were to use an alternative definition for $h$, or a different formula for the heat transfer.

Edit: to answer the specific question as to why it makes more sense logically to choose the free-stream $T_\infty$ as the 'datum' temperature, rather than any other temperature of the fluid:

From a thermal point-of-view, the fluid flowing over the plate can be broken down into two regions, the thermal boundary layer and the free-stream, as shown in the following image (taken from Wikipedia): 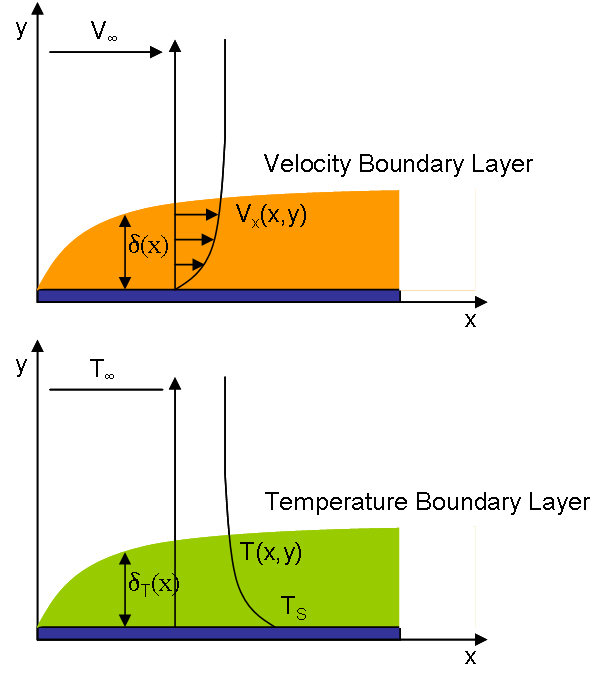 The problem with using a temperature inside the thermal boundary layer as a baseline is that the thermal boundary layer is governed by some fairly complex physics and depends on many factors, such as flow velocity, fluid properties and also it varies with tangential distance along the plate ($x$ in the above diagram). So, to use a temperature in the thermal b/l as a baseline, you would need to account for all this complex stuff that is going on (which is going to be a hassle).

On the other hand, out in the free-stream, the temperature everywhere is a constant, at $T_\infty$, because the fluid in this region is not affected by the heat transfer with the plate. This is because thermal diffusion in a fluid is quite a slow process (as long as we're not talking about some exotic, highly-conductive metallic treacle ..), so the heat diffusing out from the wall hasn't had time to get to this region yet. So, out here, we've got a constant temperature that doesn't depend on any heat transfer physics and is essentially imposed on the situation as an independent boundary condition. Therefore, it is the ideal choice to use as a temperature baseline, because it is independent, constant and stable, compared to what is happening inside the thermal boundary layer.

(and if that isn't enough to convince you, it is also easier to measure, because it extends over a larger spatial domain and has a very low (essentially zero) thermal gradient)