This question is related to twin clock experiment but also involves a third clock. Here it goes:

So, my question is: is it not necessary to define a reference frame to arrive at correct time dilation experienced by moving bodies?

A spacetime diagram might help. I have drawn it on rotated graph paper to help us visualize the ticks better, and I have chosen speeds of (3/5)c for the travelers (instead of (1/2)c) so that we can more easily count on the rotated graph paper.

With this spacetime diagram, one can tell a detailed story what each observer would measure... by visual observation of light signals, or assigning-coordinates-by-simultaneity, or both.

The bottom line is that: while the actual observations of the other traveler appear to be irregular because of their relative motions, they will be identical when they reunite and compare notes. Indeed, by your construction, their worldlines through spacetime are symmetrical. 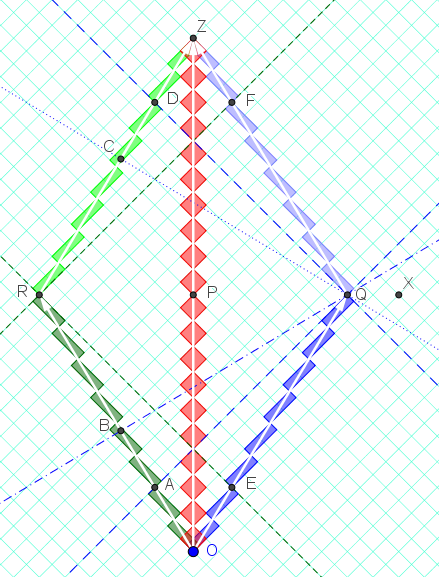 For example, Bob might watch what Carol does (because Carol will broadcast/stream her life).

Of course, Alice will tell a different story of how she watched Bob's 16 years pass irregularly in her 20 years of waiting for the reunion. However, Alice's description of Carol will be identical to her description of Bob.

Update: In response to the OP's questions, I have gone a little further to attempt to draw the "spacetime diagram" of Bob (the initially forward traveler). 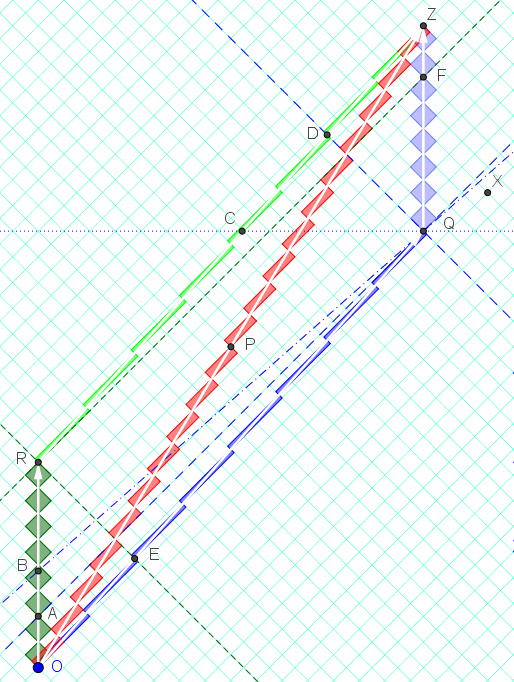 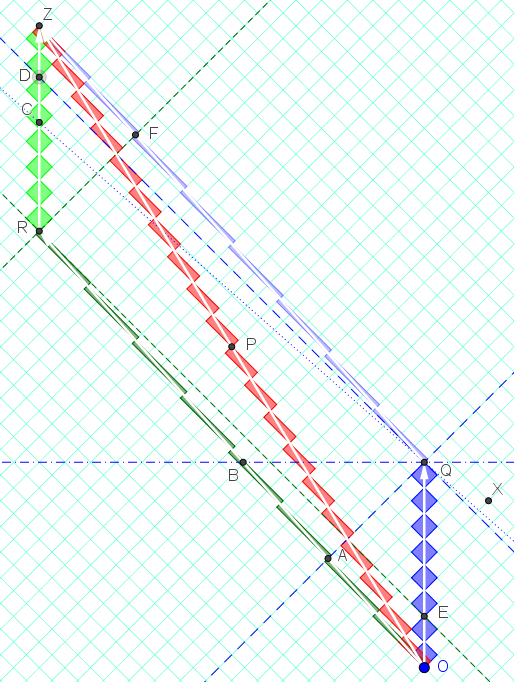 The Frankensteined-spacetime diagram for Bob [ the noninertial path O to Q to Z]: 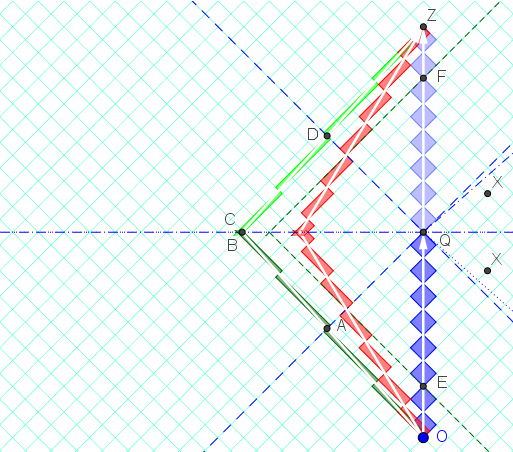 It would be most useful if you kept a firm point. Time a clock reads is its proper time, i.e. the length in spacetime of its path.

You defined paths of clocks 2 and 3 in frame where clock 1 is stationary as exactly symmetrical, so of same length. Morover, consider that the length of a spacetime path in invariant, i.e. it is the same as computed in whichever (inertial) frame.

Thus you may be certain that a computation in other frames, where 2 and 3 appear not to have symmetrical paths, would notwithstanding give equal results.

Here you have Alice, the state of which is known and the space time is kind of fixed to her frame...?

Not at all. it's better to think of spacetime as independent of particular observers and their frames. Maybe an analogy with Earth's surface helps.

Since more than a century international agreements exist as to which geographical coordinates to use: latitude and Greenwich longitude. It was not so before. French used Paris meridian as origin of longitudes, Italy (I suppose) Rome's meridian, and so on. (Latitudes were uniformly reckoned, since poles and equator are privileged references.)

The same, and more varied, happens in spacetime. Every reference frame is as good as any other, thus spacetime coordinates used in different frames are equally valid. Alice will use $(\xA,\tA)$ coordinates, Bob $(\xB,\tB)$ (but with an important proviso, see later) etc.

The proviso is that only inertial frames are allowed and this causes a difficulty with Bob and Carol, who change their speeds halfway. Two different frames must be introduced, both for Bob and for Carol, and a junction must be defined within each couple.

Those spacetime diagrams would be very awkward, as a consequence of what I said before. So much so, that it would be better to invent a "virtual" Alice with its frame. We are always allowed to do such things, since physically relevant results, relating to measurable quantities, are to be computable in whichever frame we like. In physicists jargon, are invariant.

2/2 Case 2: Suppose we also have Alice but this time Bob is home clock (the home clock in twin experiment).

You already know the answer: this is not allowed. Or better $\dots$ contrary to a diffused opinion, it is possible to use accelerated frames in SR. But at the price of considerable complication in reasoning and calculations. You ought to model Bob's motion wrt to an inertial frame, then to introduce special coordinates for Bob's accelerated frame, and so on. Out of reach for beginners, as well as useless.

In my opinion, for this and other reasons, it is better not to think in terms of time dilation (and to leave apart Lorentz transformations, seldom needed in elementary problems). This is why I suggested to work with spacetime paths and their lengths. An approach leading you to think of the physical situation and the quantities requested, instead of relying on rote formulas, prone to frequent misuse.

0
Why isn't an observer on earth considered to be accelerating in the twin paradox?
-5
Triplets paradox