I seek to model the motion of two coupled oscillating point masses as shown below:

Note that x1(t) models the leftmost point mass and x2(t) is the motion of the rightmost point mass. I would like to include sliding friction and eventually static friction in my model. I have developed the two second order ODEs:

where B is the magnitude of sliding friction ([N]) and K = C in the diagram.

I would expect this system to oscillate and come to rest somewhere around the points x1(0) and x2(0). When I numerically solve the 2nd order DE using Wolfram Mathematica NDSolve I obtain the following plot: 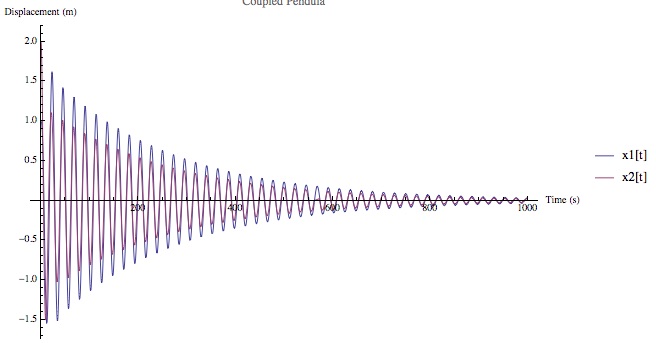 I am pleased that both masses settle at to one point as t --> infinity but I do not think both should rest at x = 0.

I was suspicious of the spring force acting on the rightmost point mass because I believe it is acting in the positive x direction. When I change x2''[t] to +C2/M2*x2[t] the system becomes unstable and diverges to infinity.

What am I missing where my oscillating masses come to rest at x = 0? Are my forces pointing in the correct direction?

(yes in my system it is possible for both M1 and M2 to pass the "walls" without repercussion.)

I am also wary of my dampening (sliding friction) force. I have experimented with dividing by the magnitude of x2-x1 but this does not yield the results I look for.

Thank you for any help!

I have anchored the second point mass to the leftmost point L as suggested. Therefore my equations looks like such:

Under the influence of sliding friction alone, should my masses come to rest eventually? When I solve the system for B>>1 the masses oscillate as if they were undamped -- why might this be?

Not the answer you're looking for? Browse other questions tagged harmonic-oscillator differential-equations models coupled-oscillators or ask your own question.