Is this Feynman diagram possible?

I have been introduced to Feynman diagrams in a particle physics University module and I just created this diagram to practice checking conservation laws: 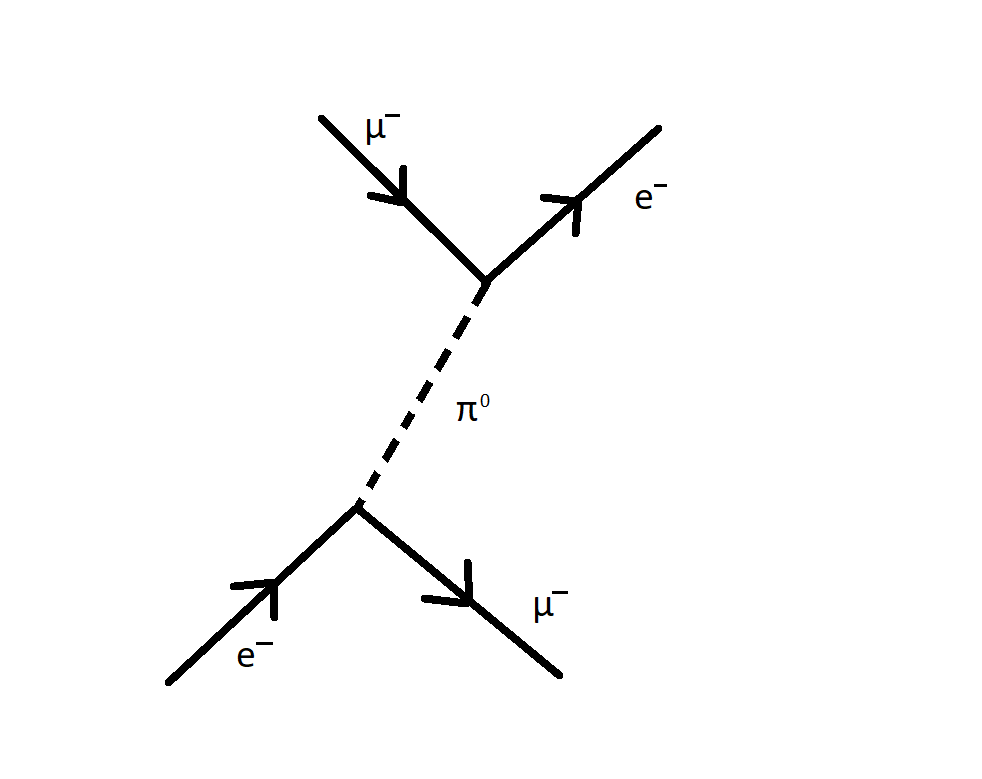 I have been told that charge, baryon and lepton numbers have to be conserved at vertices, and this is true for my diagram. I have also been told that "if the exchange particle is a neutral boson (photon, gluon, Z), quark and lepton flavours have to be conserved". Pions are also bosons, since their spin is zero (integer). So since the lepton flavour is changed in this diagram, that means that this interaction would not be allowed. However, assuming it was allowed, I then ask myself this question: which type of interaction would be going on here? It is not the strong force since leptons are not colour charged, and it is not electromagnetic since this pion is neutral. So I am left with weak nuclear force. Then would this diagram be part of a more complicated one involving W or Z boson exchanges? If someone could clarify my thoughts I would be so grateful.

This is not a possible interaction, because the three lepton numbers must be separately conserved: electron, muon and tau number. You can't turn one into the other with a pion, which has zero lepton number, and as far as I know there are no particles with lepton number $\pm 2$, so there are no electron-muon vertices at all.

Not the answer you're looking for? Browse other questions tagged particle-physics conservation-laws standard-model feynman-diagrams leptons or ask your own question.

1
Reaction in Particle Physics
2
Why is this particle interaction forbidden?
2
Is this feynman diagram possible? $e^- + e^+ \to \nu_\mu + \bar{\nu}_\mu$
0
Feynman diagram and bosons
0
Feynman diagram for the decay $\tau \rightarrow \nu_{\tau}\pi^+\pi^-\pi^-$
0
How to draw Feynman diagram of quark decaying to more than three quarks (weak), and tell if it's Cabibbo-allowed/supressed?