When resolving forces vertically and horizontally in a problem where a car is going around a banked bend, why do you consider the components of the normal force? Shouldn’t the normal force just cancel with the perpendicular component of the weight?

I am going to assume no friction on the incline, since it can be added to what is said below, and does not add anything to the main ideas here.

I have included a free body diagram of the car below: 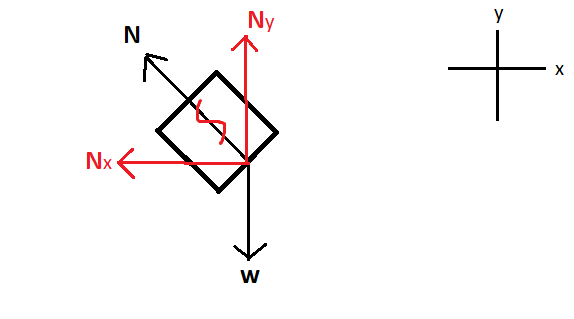 The usefulness is best seen by applying Newton's second law for each direction, knowing that the acceleration is only along the x-axis: $$\sum F_x=-N_x=ma$$ $$\sum F_y=N_y-w=0$$

In any case, if we chose a coordinate system not oriented along the acceleration, then you would instead have to break the acceleration itself into components, which is typically more work for you if you are trying to find the overall acceleration.

Let's explore this and use a coordinate system such that the x-axis is parallel to the ramp, like in our typical inclined plane problems. I have included a new diagram below of this: 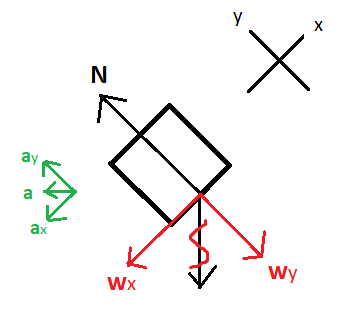 Notice how now we have two equations dealing with the acceleration instead of one. This is not incorrect, but we just have to do a little bit more work if we want to determine the magnitude of the acceleration here. We have two vectors broken up into components here (acceleration and weight) instead of just the one in the previous case (the normal force).

We can also see here that the normal force is not equal and opposite to $w_y$ like we usually see in inclined plane problems. This is because now $a_y\neq0$. The acceleration has components both along and perpendicular to the incline.

$^*$Compare this to what you are probably more used to with your typical inclined plane problem (like a block sliding down a ramp). In this case the acceleration is along the ramp, so we break up the weight into different components instead, one along the acceleration (along the incline) and one perpendicular to the acceleration.

Not the answer you're looking for? Browse other questions tagged newtonian-mechanics forces vectors free-body-diagram or ask your own question.

0
Expression for Normal reaction on bodies on inclined plane