Why can we not use the specific heat to determine the work done on steam in a Rankine cycle?

Okay, I am trying to work backwards from an exam which I messed up and I am trying to figure out what the lecturer did based on his answers posted online. Looking back, I realise one mistake I made was to use the specific heat of water given to calculate the enthalpy change in a transition from one pressure to the next.

In a transition within a Rankine cycle: I have P1 = P2 = 200 bar. Moving from 1 to 2, the water vapour turns to two-phase water and the enthalpy at point 2 is given as 2,353 kJ/kg. We also know that the enthalpy at 1 is 145 (worked out from a constant volume work problem and it checks out with the lecturer's answer).

Long story short: if I had tried to use the specific heat of water to determine the change in enthalpy and work from there to the enthalpy, I would have been way off. Instead, students were meant to use the given enthalpy value and then find the correct temperature from a table of saturated water provided.

I understand that the specific heat of water will change with temperature, but looking up the temperatures I am working at (changes from 30 C to 388 C) I can see that even an averaged out specific heat does not allow for a computation of a change in enthalpy from 145 to 2,353 (the second value was given). So I'm trying to figure out what I don't understand; why is a specific heat/temperature change calculation insufficient to calculate the enthalpy change here.

From point 1 to point 1A you can use specific heat to calculate enthalpy change. From point 1A to 2 you have liquid and vapor at constant temperature. The change in enthalpy (527) is entirely due to the heat of vaporization. 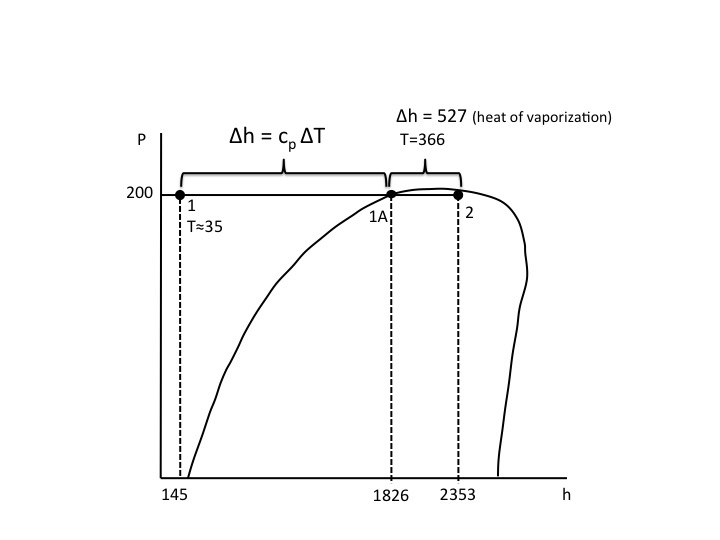 10
Heat and work are not the state functions of the system. Why?
0
Why doesn't volume change account for the energy change in this problem?
1
Enthalpy of steam vs specific heat
0
Is there any relation between the specific heat of steam and enthalpy?
6
Why is steam a good working fluid for heat engines?
0
When do we use the saturated water tables in a steam/Rankine cycle?
1
Why are experimentally obtained specific heat values for different metals higher than the theoretical values?
1
Why heat and work?