How do “pouring spouts” prevent liquid from escaping through the air intake?

You may be familiar with the types of pouring spout found in many professional cocktail bars, similar to the following: 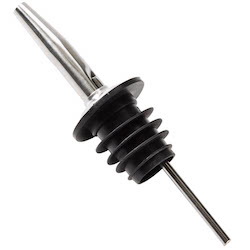 The hole on the top of the spout is an air intake, which connects to the narrow pipe that protrudes into the bottle. Liquid can therefore flow out through the spout whilst air flows in through the intake—resulting in a smooth pour, uninterrupted by bubbles forming at the bottleneck.

Is it simply because surface tension prevents the liquid from "squeezing" through the narrow aperture of the air intake pipe (and being "squeezed" past a bubble of air at the aperture of the spout)? If so, what is the maximum size for an aperture, like the air intake pipe, that will deny water from passing (and for one that, like the spout, will deny both water and air from passing together)?

The spout you wish to have the liquid come out of has a much larger diameter and so viscosity has less of an effect (the flow rate depends on something like $\rm (diameter)^4$for laminar flow) on the flow though the wider tube and the pressure difference across the larger diameter tube is larger because the end in the liquid is lower than the end of the thinner tube whilst the other ends are both at atmospheric pressure.

Your question about maximum diameter is perhaps the basis of an investigation?

While @Farcher's explanation is plausible, I think air enters from the top hole and liquid flows through the bottom hole because this flow configuration is stably stratified (denser fluid is at the bottom).

While surface tension and density may have something to do with the design of such spouts, I believe the key design element is the distance between the tube openings inside the bottle. 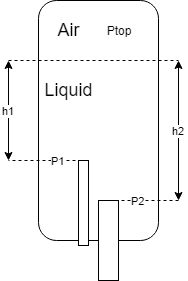 When the bottle is initially inverted, the pressure of the air at the top (Ptop) is at atmospheric pressure. Thus, the pressure at the air tube is P1 = Ptop + ρgh1 = Patm + ρgh1 where ρ is the density of the liquid, g is acceleration due to gravity, and h1 is the height of the liquid at that point. Similarly, the pressure at the pour spout is P2 = Ptop + ρgh2 = Patm + ρgh2. Since both of these pressures are greater than atmosphere, some liquid will come out of each hole at first. I suspect either no liquid comes out of the air tube or it just isn't noticed due to the quickness of the bottle inversion and the liquid coming out.

Next, the liquid keeps exiting both holes until a partial vacuum is created in the air above the liquid such that Ptop = Patm - ρgh1. At this point, P1 is equal to atmosphere, and no air or liquid moves through the air tube. Note that unless you stop liquid from coming out of the pour spout, this state only occurs for an instant.

Now, P2 = P1 + ρg(h2-h1) = Patm + ρg(h2-h1). Because the pour spout is at a greater pressure than atmosphere, liquid exits this hole. Air enters the air hole since the falling liquid level decreases pressure at P1. This state is maintained until the liquid level is lower than the air tube level. Note the constant pressure at the pour spout results in constant velocity in the liquid. See Bernoulli's equation.

This process is similar to a Mariotte bottle. From Wikipedia, at Mariotte bottle is, "a device that delivers a constant rate of flow from closed bottles or tanks." These lecture notes offer a good explanation as well. I've paraphrased some of the content in this explanation.

Not the answer you're looking for? Browse other questions tagged fluid-dynamics pressure flow surface-tension molecules or ask your own question.

0
What is the aperture in the hydraulic analogy of Ohm's law
6
How come a whistling kettle starts whistling only when water boils, and not long before - due to hot air escaping under pressure?
0
Fluid dynamics? What will happen to liquid pressure and flow rate in a system that splits and recombines the the flow of liquid?
14
How to pour water from a bottle as fast as possible?
1
Suppose you have airflow through a narrow glass tube. Does the air slip at glass surface?
1
Turn over a full bottle, why does it pour?