Why do we assume the force of static friction is maximum in problems involved with rolling objects on inclined planes?

The maximum force of static friction between two surfaces is roughly proportional to the magnitude of the normal force $N$ pressing the two surfaces together.

In many problems involving rolling cylinders, the rolling object may not be under the influence of the maximum possible frictional force; but they always assume the coefficient of static friction is maximum while deriving the equations or solving problems. Why does this work ? (Shouldn't the magnitude of the frictional force be equal to the force with which the object is being pulled ? ($mg\sin\theta$ in below example)) 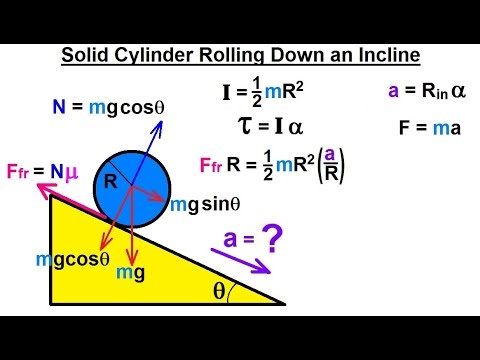 Let's set up the problem. You already have the free body diagram in your question, so I will not make a new one. Of course the forces balance out perpendicular to the ramp, which you already have: $$N=mg\cos\theta$$

Parallel to the ramp we have, using Newton's second law: $$\sum F_x=mg\sin\theta-F_f=ma$$

Also, using the Newton's second law for rotation we have $$\sum \tau=RF_f=I\alpha=I\frac aR$$

Where we have assumed rolling without slipping, so $\alpha=\frac aR$. From here you will find that you don't actually need a value for the friction force to find the acceleration. I will leave this up to you to solve from here.$^*$

Shouldn't the magnitude of the frictional force be equal to the force with which the object is being pulled ?

This would mean that $mg\sin\theta=F_f$, so then $a=0$. But if $a=0$, then by our torque equation we must have $F_f=0$, which is a contradiction. Therefore, it is impossible for our static friction force to be equal to the component of the weight down the ramp. The rolling ball will always accelerate down the ramp, and so $F_f<mg\sin\theta$.

...they always assume the coefficient of static friction is maximum while deriving the equations or solving problems

You can actually solve for $F_f$ here too by eliminating $a$ from the above equations. The result ends up being, if we want no slipping $$F_f=\frac{mgI\sin\theta}{I+mR^2}\leq\mu mg\cos\theta$$

We can compare this to a block on an incline, where the angle of no sipping is determined by $\tan\theta\leq\mu$, which is when $\gamma\gg1$ (i.e. an object that is very hard to roll, kind of like a block on an incline (the analogy is not perfect, so don't go too far into it)).

$^*$Note: This is the standard procedure for solving problems like these.