Could life survive a pole shift caused by an asteroid collision?

Could life on earth survive a large pole shift caused by an asteroid collision?

I became aware that there are people who believe that the earth's pole suddenly shifts. That is, its rotational axis changes rather than its magnetic axis. This is listed in wikipedia as follows:

Cataclysmic pole shift hypothesis The cataclysmic pole shift hypothesis is the conjecture that there have been rapid shifts in the relative positions of the modern-day geographic locations of the poles and the axis of rotation of a planet. For the Earth, such a dynamic change could create calamities such as floods and tectonic events.
...
The field has attracted pseudoscientific authors offering a variety of evidence, including psychic readings.
...
http://en.wikipedia.org/wiki/Cataclysmic_pole_shift_hypothesis

While watching a chess game at the local club a fellow member told me that he'd found the solution for where oil came from. It was long and involved. One of its features required that the earth's axis be changed by 90 degrees due to the collision of an asteroid a few million years ago. The idea was that the earth's axis used to be in the plane of the earth's orbit, but then it was knocked into its current rotation axis tilt of around 23 degrees. This changed the climate and buried a lot of stuff.

The axis shift seemed to be an obvious weak link with the theory in that it involves the simplest physics. I told him that any asteroid large enough to change the earth's axis an appreciable amount (i.e. 70 degrees!) would cause so much damage as to destroy all life on the surface of the planet including its oceans. I'd have forgotten about it, but the other night, while listening to the radio, a guest appeared who had an idea that was similar. So this seems like a common target for pseudoscience.

And so my question is this: Would an asteroid collision sufficient to immediately change the earth's rotation axis wipe out all life on the planet?

Quite clearly this man’s theory is balderdash. A massive collision could change the tilt of the Earth’s axis, but that would be one hell of a torque. The collision would not be with an asteroid either, but with another planet that might be as big as Mars. Clearly nothing like this happened in recent geological history, though the Earth did suffer a collision of this magnitude a few 100 million years after gravitational accretion. A chunk from the collision spalled off to form the moon. This other planet probably was in some resonance condition around a Lagrange point.

This would be a devastating collision, which would doubtless change this planet into something else. The solar system has not experienced such collsions since its early evolution. The solar system is now staid and respectable. Velikovskian things just do not happen.

The reason a relatively small asteroid can wipe out all life on earth is due to the kinetic energy it carries. Upon collision, the kinetic energy is converted to heat. If the asteroid is large and fast enough, the heat will increase the temperature of the atmosphere enough to boil off the oceans and even vaporize the salt deposits left over.

Since kinetic energy is proportional to the square of velocity while momentum is only proportional to velocity, we will assume that our asteroid is moving as slowly as possible. The escape velocity of the earth is 11 km per second; to achieve a slower velocity an asteroid would have to be very lucky. So in calculating the kinetic energy of the asteroid, we'll assume a very conservative speed of 5 km/sec.

In other words, the collision would result in the release of kinetic energy equal to 600 million million hydrogen bombs going off, each with an equivalent energy of one million tons of high explosives. The earth's surface area is 500 million square kilometers or 500 million million square meters. So the energy release is equivalent to having a 1 megaton bomb going off on each square meter of the earth's surface. And since the vaporized rock from the blast is lighter than rock, this vapor will condense on the surface and apply its heat to the surface.

For a video of a 500 km asteroid hitting the earth (1/1000 of the volume necessary to change the earth's axis) see:
http://www.youtube.com/watch?v=vZiZU42sn6w 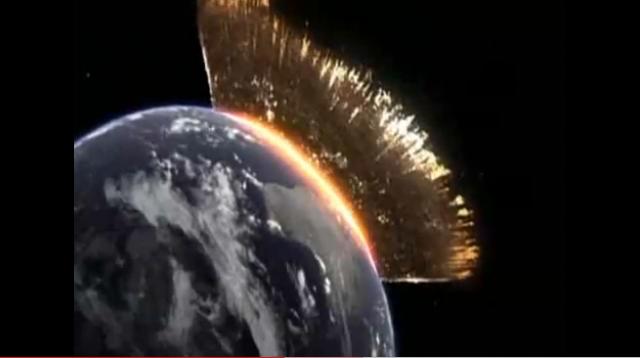 Even more than the collision, you'd be hard pressed to explain why the Earth's axis would lie in the orbital plane in the first place. The "default" inclination for the major planets in the solar system is close to perpendicular to the orbital plane (well understood since the Laplace theory of planet formation, with some caveats), and inclinations as large as that of Uranus and Venus required very major collisions.

Not the answer you're looking for? Browse other questions tagged classical-mechanics thermodynamics angular-momentum rotational-dynamics or ask your own question.

6
What is the scientific reason for the inclination of earth's rotation axis?
1
Why do some objects tend to change their axis of rotation while rotating?
4
NASA's asteroid mission and angular momentum
2
Why is the centre of Earth's axial precession perfectly perpendicular to the ecliptic? (is it?)
1
Why Earth's axis is in this particular position with respect to the perihelion?
2
Why does the direction of a Foucault pendulum change if its axis is not parallel to the rotation axis of the Earth?
0
What happens energy-wise if you put a gyroscope at the north pole?