Can someone prove the Principle of Moments from Newton's Laws?

Is it possible to rigorously proof the Principle of Moments from just Newton's three laws?

Here's my formulation of the laws/axioms? Someone tell me politely if I'm wrong.

Actually, as a side note, it looks like the third law is the only "Law" of nature, the only empirical assumption about the empirical world. The first law is a trivial consequence of the second, and the second seems to be to be merely a deinition of "velocity", "mass", "momentum" and "force" (hence my bold face font). -- Am I wrong here?

In other words, referring to my wonderful drawing, show that if the see-saw (a uniform, stiff, strong, inelastic, rod) is balanced, then $A \cdot d = B$. 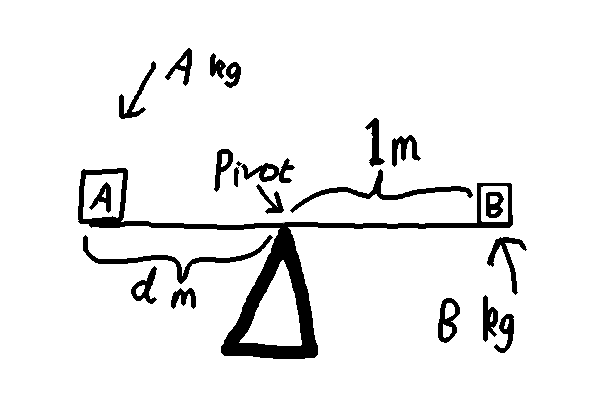 There are a couple of different ways you can show this. Personally, the way I think is simplest is to use Newton's laws to derive the equation $$\mathbf{\dot{L}} = \mathbf{\Gamma^{ext}}$$ where $\mathbf{L}$ is the total angular momentum of the system and $\mathbf{\Gamma^{ext}}$ is the external torque acting on the system. The result you're after comes trivially after requiring $\mathbf{\dot{L}}=\mathbf{0}$. I don't have time to derive this myself right now, but you can probably find a derivation somewhere online, and I'll try to add one later when I have time. I like this approach because it doesn't require messing around with constraint forces, although it is probably a little more removed from intuition than the other way of doing it.

The other way of doing it would be to use Newton's laws as-is and introduce forces that the two masses and the fulcrum have to exert on each other in order to maintain certain geometric relationships between them. In particular, if we center a polar coordinate system on the pivot point, we want our forces to be such that the constraints $$\dot{\theta_A} = \dot{\theta_B} = 0$$ $$\dot{r_A} = \dot{r_B} = 0$$ $$F_{fulcrum} = 0$$ are always satisfied. Again, I'll try add a complete proof later if I have more time. Hopefully, these rough sketches of proofs help though!

Not the answer you're looking for? Browse other questions tagged newtonian-mechanics rotational-dynamics torque statics moment or ask your own question.

7
Fields and Newton's Third Law
2
Separating the potential energy of a system of particles.
8
Can torque relations actually be *derived* from Newton's Laws, or is it something extra?
0
Reactive force on two objects with central forces
0
Varignon's theorem (Principle of moments) failure?
0
How to understand force given an inconstant mass?
3
Can the law of the lever be derived from only Newton's Three Laws of Motion?
0
Can the mass denominator in the definition of the center of mass be taken arbitrarily?
3
Conservation of angular momentum and central forces