The pattern will have the same symmetry as the slits: it will consist of something like a bull's eye pattern. The exact arrangement of light and dark circular fringes will depend on the widths of the two annular (circular) slits and their radii. 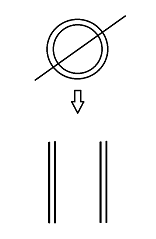 Now "roll up" the linear fringe pattern to form a bull's eye pattern. This is an approximation of the interference pattern you would get from your double-ring interferometer. An exact calculation can be done if you're handy with calculus.

Not the answer you're looking for? Browse other questions tagged optics waves double-slit-experiment or ask your own question.