Friction between two blocks on top of each other

I am a little bit confused to the concept of friction between two blocks on top of each other. there could be two situations: the first situation is when all surfaces are frictionless including that one between the two blocks. if one force $F$ pulls the lower block, then I read somewhere that we should consider both blocks as one block and the upper block will remain at rest and so they have the same acceleration. but still, i don't get why it will remains at rest? second situation: if there is a friction between the two blocks, then applying an F force will make the upper block slide with it's own acceleration. Is this right? and regarding the force needed to make the upper block slide, is there any specifications?

Most of the confusion that arises in friction problems like this due to not drawing free body diagrams (FBD) showing all forces acting on the blocks.

The FBD below show the two scenarios you posed.

The left figure shows that the only horizontal force acting on the two blocks is the force $F$ applied to the lower block. There is no horizontal force acting on the upper block and therefore it does not move. There are no forces resisting motion of the lower block and therefore it moves with acceleration $a_Y=\frac {F}{M_Y}$ and slides underneath the stationary upper block and over the ground. The blocks will never move together.

The right figure shows equal and opposite friction forces acting on the upper and lower block. To make things simpler, we are assuming no friction between the lower block and ground. 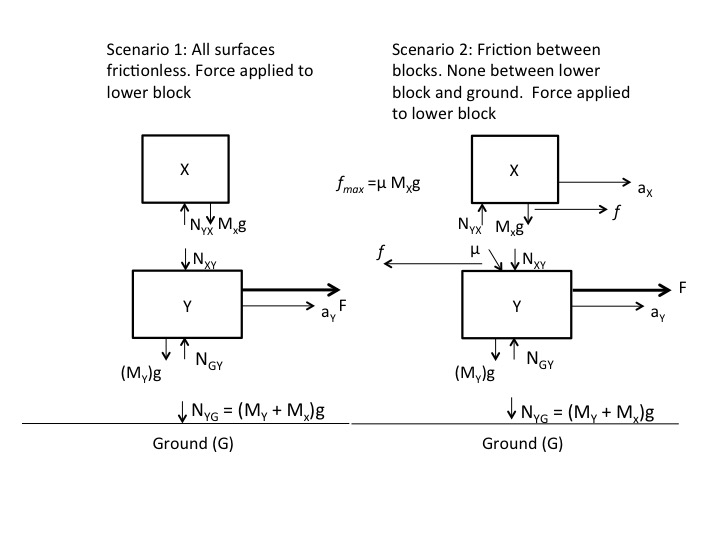 1
Preventing a block from sliding on a plane (with friction)
0
Two Blocks and a Cord (Friction and Tension)
0
Energy lost by friction if two blocks sliding past each other until stop, equal mass, equal/opposite velocity?
3
Why doesn't the static frictional force between two blocks, placed on top of one another, cancel out the applied force?
2
Two stacked blocks with the upper block pulled with force $F$
0
How friction makes a block move on top of another