What happens if an object that is rotating very fast also travels very fast?

For example, if you throw a frisbee and it travels away from you while spinning clockwise. At any single point in time, the left side of the frisbee will be traveling away from you faster than the right side right? 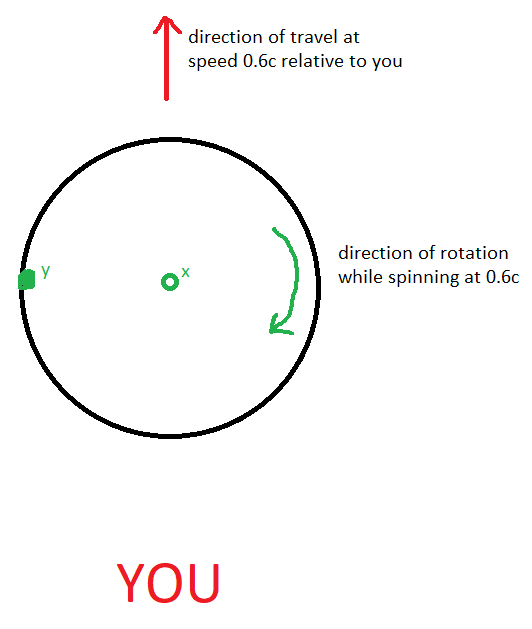 I know this is probably a stupid question and I am missing something. But can someone explain so that I can understand?

The physics we know tells us that nothing goes faster than the velocity of light ,c, in vacuum.

What is a frisbee? it is a solid state item held together by electromagnetic forces of the atoms and molecules that compose it, and set up to spin. As the velocity approaches the velocity of light special relativity becomes important, which means it is four vectors which will describe the setup. This article describes an analogous set up

When an object is moving close to the speed of light, relativistic effects occur. For example, to an external observer an object moving very fast appears squeezed in the direction of the object’s motion (Fig. 1).

This so-called Lorentz contraction arises from the timing in which light from the fast-moving object arrives at the observer. Bliokh and Nori have now shown that if such an object also rotates at the same time, for example a flywheel, then the rotating motion is also affected. The spokes in the wheel appear distorted in a way that makes them seem denser in one direction than the other. This is a general effect. For electron beams for example, it would appear as if the electrons accumulate mainly on one side. Hence, this effect has been named a relativistic Hall effect, as it is an analog of the usual Hall effect, where moving electrons in a magnetic field accumulate on one side of a material.

It is not a frisbee, but one can see that the mass distribution in the frisbee will seem compressed in regions and diluted in the opposite side, which will look strange from our frame, but is not detectable in the center of mass of the rotating wheel.

As K_inverse pointed out in a comment, relativistic speeds do not add linearly. Yes, the center of the disk is moving away from point "You" at a speed of 0.6 c. And yes, the right-most edge of the disk is stationary with respect to point "You". But point y is moving at (1.2 / 1.36) c, or 0.8823 c, according to Philip Gibbs and Terence Tao's explanation at http://www.math.ucr.edu/home/baez/physics/Relativity/SR/velocity.html .

The general formula they give to combine a speed v which is relative to an object that has speed u relative to the observer, with both speeds in the same direction, is:

1
If an observer were to move toward the moon at a significant fraction of the speed of light, will its cross section appear a different size?

1
The speed of tachyons
1
What is the speed for an object that travel close to the speed of light?
0
Occlusion of light with very fast objects
0
“If the astronaut found that light slowed down relative to his motion, he would have detected the very ether wind that Michelson failed to detect”?
17
What happens if a super fast rotating ball accelerates near speed of light?
1
Tachyons and Lorentz velocity transformation