How to measure angles in Minkowsky space, and how do they transform?

Now I have some doubts:

but I didn't although I have transformed the vector using the transformation law... What is wrong?

I answer my own question after realizing what I was doing wrong. It is very similar to Bruce Greetham's answer but with more detail.

What I was doing is trying to use a unique 4-vector $a$ to measure the distance in both frames, and this is wrong because distance measurements must be simultaneous in BOTH frames. Thus, what I was trying to do can be depicted in spacetime diagrams as:

As can be seen, if $a$ is simultaneous in one frame, lets say the lab frame, then it is not simultaneous in the boost frame, and vice versa. So trying to use the projection of only one 4-vector is not enough.

After thinking about this I realized that I had to consider the world line of an object used to measure the distance. This allows to define two 4-vectors $a$ and $b$ as follows:

So in the lab frame the distance must be measured using $a$ (that coincides to be the space projection of $b$ just because it is at rest, but may not be the case) and in the boost frame the distance must be measured using $b$. The important requirement is that $a$ is a purely space like 4-vector in the lab frame and the same for $b$ in the boost frame.

Now lets move to the math. The coordinates of each 4-vector in each frame are: 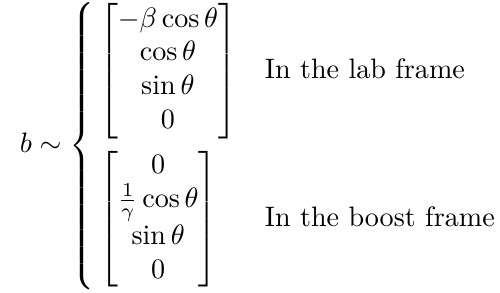 Now we can calculate $ \theta $ as seen in both frames. First, in the lab frame we get what we expected:

In the boost frame this reads:

If we plot the transformation for some values of $\beta$ we have: 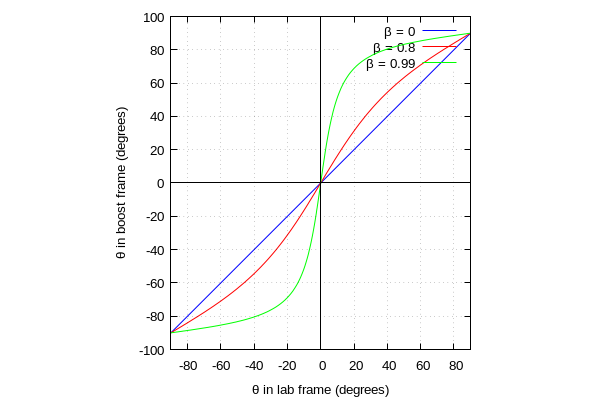 If you're moving, the angle is going to change. What you want to do is to define the origins of your reference frames $S$ and $S'$ at $t_0 = t_0' = 0, x_0 = x_0' = 0$. That is, $t_0 = t_0'$ is when observers in each frame perform their angle measurements. But how do they make a measurement? There was some event at $(x,y), t < 0$ which created light. In order to see the event, the light must have traveled some distance to enter their eyes. This is why you can't use $t = 0$ as the event time, because if the event happens anywhere away from the origin, there is no time for light to travel to the observers. But since $S'$ is traveling w.r.t. $S$, the distance the light had to travel is not the same.

which is always larger than $x$ (for positive velocity).

which is always smaller than $45^\circ$.