This may sound like a trivial question, but I am wondering: is it possible for there to be multiple centers of mass? And if it isn't, why?

For example, take some arbitrary 3-Dimensional object, floating around in space, perfectly still.

Let's define a $Y$ axis and an $X$ axis that go through the object. 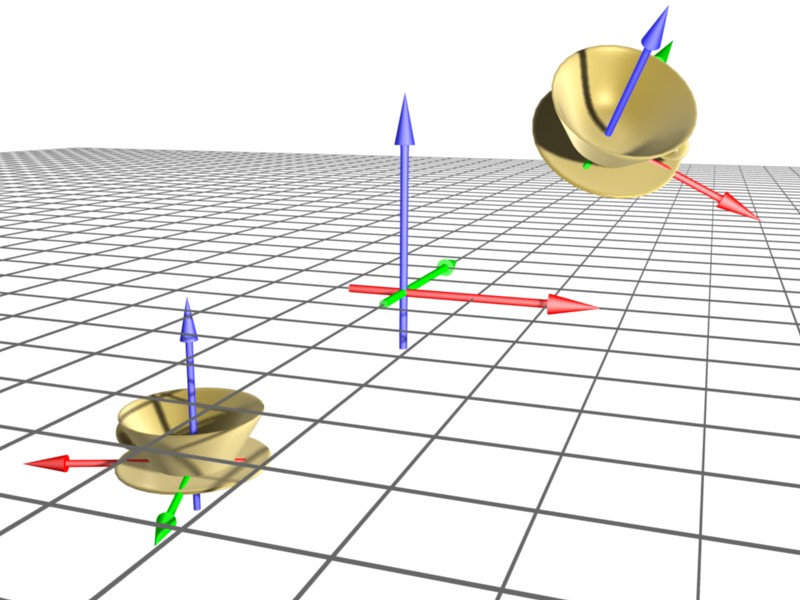 The image is just an example to show what I mean by defining the axes.

You prod the right side of the object with a stick, so that it rotates entirely around the $Y$ axis. Every part will be in motion except the center of mass, around which the entire system will rotate.

Now you stop the object from spinning, make sure its still in space once again, and now prod it with a stick near the top, so that it rotates around the $X$ axis instead.

What assures that the point that will remain still, the point that the entire system will spin around, the center of mass, will be the same as when the object was rotating around its $Y$ axis?

*Edit: My question was said to be a possible duplicate of the question linked below. I don't really see how, but then again, I'm really confused by rotation (as you can see by a different question I have called Why do things spin) If someone could please explain why its a duplicate in their answer, that would be awesome as well! Thank you!*

It's easier to visualize if you recall the definition on how to find the center of mass (for simplicity, let's consider the discrete case):

This obviously further decomposes in 3 equations (one for each direction), but you can convince yourself by the form of the equation (which is linear), that the value of $\vec{R}=(x,y,z)$ is unique for a given object, and thus the center of mass is a unique point in the object.

However, what you can have is multiple axes of rotation around the same point, the pivot. In all case, no matter how you choose your axis, the object will rotate while the pivot remains in place (which again, is the definition of pivot). In your case, you're choosing the pivot as the center of mass, so the center of mass won't move if you choose, for example, to rotate it around the X-axis or the Y-axis.

A free rigid body will rotate about an axis when a pure torque (force couple) is applied. The location of the center of mass is defined as the "unique" point where all possible (rotation) axes intersect (the term used is a pencil of lines).

This point has two inter-related properties and is purely defined by the geometry of the problem and not the applied loads/forces.

This point is unique because it a sense it decouples the linear and rotational motion. If you look at the total momentum of a bunch of individual particles moving as a rigid body and you work out the expression for momentum $$\vec{p} = \sum_i m_i \vec{v}_i$$ you will find that the velocity of the center of mass $\vec{v}_C$ and the total mass $m=\sum_i m_i$ simplify the above into $$\vec{p} = m \vec{v}_C$$

What might be confusing you, is the fact that the mass moment of inertia (rotational mass) differs with which direction you are rotating about.

What is also interesting is that for an articulated set of rigid bodies that are connected with joints, there is still a single effective center of mass, but the amount of acceleration you get by applied a force through it depends on the direction of the force. For a single body any force through the center of mass accelerates the body the same (since $m$ is a scalar value).

The only case where a body does not have a unique center of mass is one where the body is not free floating but attached to the ground by means of a joint. For example, a body sliding on a frictionless axis (prismatic joint) can only translate and never rotate, thus where the force is applied doesn't matter and the system does not have a unique effective center of mass.

Not the answer you're looking for? Browse other questions tagged rotational-dynamics rotational-kinematics rotation or ask your own question.

7
Do objects rotate around the torque vector or its center?