Can a curvature singularity (i.e. BH), as defined in terms of geodesic incompleteness, actually exist in nature?

A curvature invariant is a scalar representation of curvature derived from a curvature tensor. The classic example is the Kretschmann scalar derived from the Riemann curvature, where $K=R_{μνλρ}R^{μνλρ}$.

This is a coordinate independent measure that allows one to discern between coordinate and curvature singularities. For example in the Schwarzschild black hole spacetime the Kretschmann scalar is

where $M$ is the geometrized mass.

Different geometries yield different functions for the curvature invariants and since all classical BH geometries are required to have singularities by the Geodesic Incompleteness theorems of Hawking and Penrose, then the curvature necessarily runs to infinity. For the example above it should be obvious that

There are no anti-infinity theorems. If so, can a curvature singularity, as in geodesic incompleteness, actually exist in nature?

Imagine that you have a hand-held detector which has a needle pointer such as an analogue voltmeter: 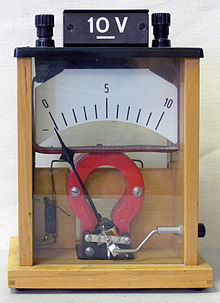 Now imagine a theory that should give you the value to which the needle points. Usually this theory gives you a real value, but you find a point where it gives you an imaginary value as an output of a real physical situation. What do you conclude? That the needle will point to an imaginary value? Surely not. When the theory starts predicting imaginary values, it is simply wrong: it does not predict any actual behavior of the needle.

Now consider the example of the black hole. Quantities such as the curvature scalars are in principle measurable by geodesic deviation. $\infty$ is not a real number. The predictions that are provided at the point of the black hole singularity are thus outside of the real numbers and the theory provides no predictions for the measurements.

Since the theory is simply undefined at the singularity, it does not need to fulfill Einstein equations or any equations whatsoever; its behavior is arbitrary. In other words, the "boundary" of the space-time at $r=0+\varepsilon$ can have absolutely arbitrary boundary conditions. It could start spewing cats and pianos as well as tachyons. On the other hand, if we make a few conservative assumptions such as that momentum-energy is conserved by the action of the singularity, and that exotic matter is not created by it, it actually turns out that the boundary can do whatever it wishes and this will bear no consequence on the space-time outside of the horizon. This is actually the implicit assumption of numerical-relativity evolutions of black holes.

In summary, the $\infty$ is a problem and makes the theory incomplete. A physical quantity with value $\infty$ has no operational definition and thus cannot be physically existent. However, it turns out it is not a practical problem for using the theory for astrophysical purposes as long as we make some basic assumptions about the behavior of the singularity.

Not the answer you're looking for? Browse other questions tagged general-relativity black-holes curvature singularities or ask your own question.