What is Chirped Pulse Amplification, and why is it important enough to warrant a Nobel Prize?

The 2018 Nobel Prize in Physics was awarded recently, with half going to Arthur Ashkin for his work on optical tweezers and half going to Gérard Mourou and Donna Strickland for developing a technique called "Chirped Pulse Amplification".

In general, optical tweezers are relatively well known, but Chirped Pulse Amplification is less well understood on a broader physics or optics context. While normally the Wikipedia page is a reasonable place to turn to, in this case it's pretty technical and flat, and not particularly informative. So:

Lasers do all sorts of cool things in research and in applications, and there are many good reasons for it, including their coherence, frequency stability, and controllability, but for some applications, the thing that really matters is raw power.

As a simple example, it had long been understood that if the intensity of light gets high enough, then the assumption of linearity that underpins much of classical optics would break down, and nonlinear optical phenomena like second-harmonic generation would become available, getting light to do all sorts of interesting things. Using incoherent light sources, the required intensities are prohibitively high, but once the laser was invented, it took only one year until the first demonstration of second-harmonic generation, and a few short years after that until third-harmonic generation, a third-order nonlinear process that requires even higher intensities.

Put another way, power matters, and the more intensity you have available, the wider a range of nonlinear optical phenomena will be open for exploration. Because of this, a large fraction of laser science has been focused on increasing the available intensities, generally using pulsed lasers to achieve this and with notable milestones being Q-switching and mode-locking.

However, if you try to push onward with a bigger laser amplifier and more and more power, you are basically destined sooner or later to hit a brick wall, rather brusquely, in the form of catastrophic self-focusing. This is a consequence of yet another nonlinear effect, the Kerr effect, happening inside the laser medium itself. At face value, the Kerr effect looks harmless enough: basically, it says that if the intensity is high enough, the refractive index of the material will rise slightly, in proportion to the intensity: $$ n(I) = n_0 + n_2\: I. $$ So, what's the big deal? In short, if you have a laser beam propagating through such a medium, then

This makes up a positive feedback loop, and if the initial intensity is high enough, the medium is long enough, and there isn't enough initial diffraction to counteract it, then it will spiral out of control and cause catastrophic laser-induced damage in the very medium that you're trying to use to amplify that laser beam. (Moreover, it is quite common, particularly in air, that the laser will diffract on the damaged spot and then re-self-focus a bit further down the line, a phenomenon known as laser filamentation. If you get things just right wrong, this can propagate a failure in the gain medium up to the destruction of an entire beamline.) 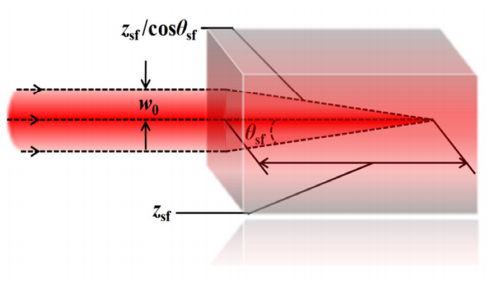 This sounds like a funky mechanism, but it was a huge roadblock for a very long time. If you plot the highest laser intensity available at different times since the invention of the laser, it climbs quickly up during the sixties, and then it hits a wall and stays put for some ten to fifteen years: 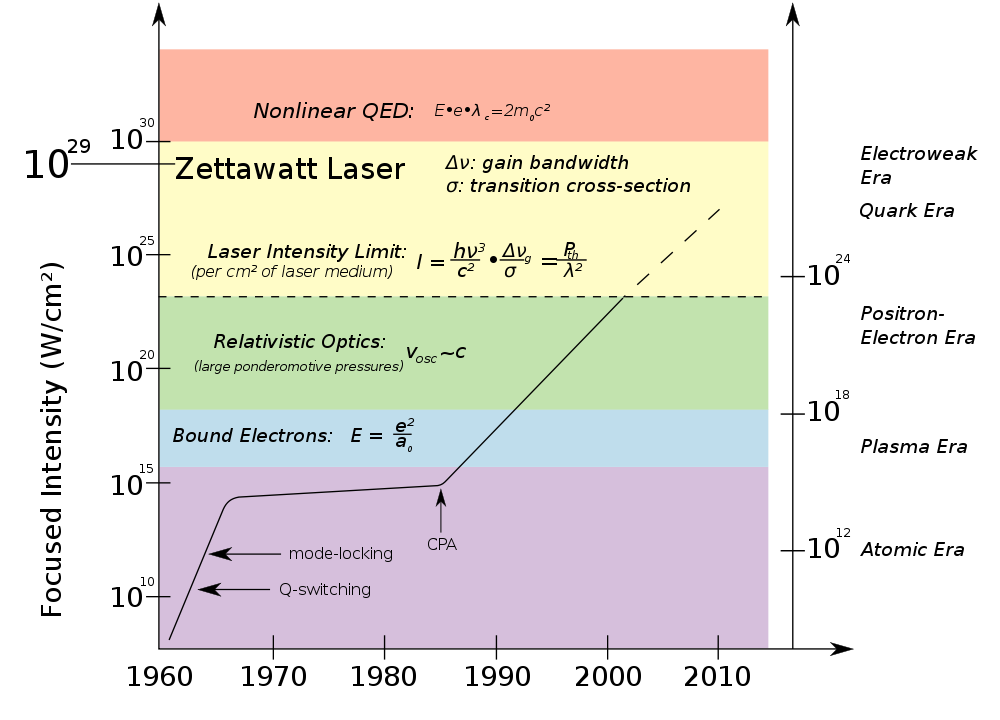 This represents the barrier of Kerr-lens self-focusing, and at the time the only way to overcome it was to build a laser which was physically bigger, to dilute the intensity over more gain medium to try to prevent the problem. Until, that is, Chirped Pulse Amplification came around to solve the problem.

At its core, Chirped Pulse Amplification (CPA) works by diluting the light, so that it can be amplified to a larger total power without reaching a dangerous intensity, but it does this stretching in time, i.e. longitudinally along the laser pulse.

The core feature that makes the method tick is the fact that, when done correctly, the stretching of the pulse will completely conserve the coherence between the different frequency components, which means that it is fully reversible and when you add a cancelling chirp the pulse will go back to its initial shape.

Furthermore, the method relies on the fact that stimulated emission will completely duplicate, in a coherent way, the photons that it is amplifying, which means that the photons that are introduced by the amplification will have the same frequency and phase characteristics as the initial pulse, which means that when you remove the chirp from the amplified pulse the added-in photons will also compress into a tight envelope.

Some additional resources for further reading:

As an addendum to @EmilioPisanty’s excellent review, I’d just like to mention one more application of CPA lasers, which may be overlooked from a theorist’s perspective:

Lasers based on chirped-pulse amplifiers, which have pulses with energy ~5 mJ and duration ~30 fs are the backbone of all but the simplest ultrafast pump-probe spectroscopic techniques. This is because such pulses allow for efficient low-order nonlinearities such as sum-frequency generation, optical parametric amplification, etc., which have greatly expanded the parameter space of these types of experiments. People are clever, and when given more than enough laser power to work with, they come up with increasingly more complex tricks to ferret out the truth.

Without launching into a review of thousands of ultrafast spectroscopic research results, let it suffice to say that humanity knows a lot more about how the world operates on picosecond and sub-picosecond time scales (in fields as disparate as condensed matter physics and quantum biology) thanks to CPA-based lasers.

41
Is there oscillating charge in a hydrogen atom?
14
Have we directly observed the electric component to EM waves?
37
Why does ice make such peculiar sounds?
12
Is quantum tunneling related to imaginary time?
8
Why are blue light-emitting diodes important enough to warrant a Nobel prize?
6
Holograms other than light
3
Relation between intensity of light and refractive index
5
Is a GASER a theoretical possibility?
1
Why are pulsed lasers are the main tool used in nonlinear optics applications, instead of CW sources?
4
Polychromatic propagation of EM wave
See more linked questions

7
What is a backlit CCD sensor, and why might I prefer it to other kinds?
2
Why light reflects off a surface? And what causes the phenomena of the total internal reflection?
0
Can Chirped Pulse Amplification (CPA) be used for creating antimatter?
0
What is the mathematical relation between the bandwidth of a light pulse and its duration?