I am new to particle physics. So this might seem to be a trivial question.

I read about $\omega$ and $\phi$ meson states being written in terms of octet and singlet state.

In the same way, can $\rho$ and $\omega$ states interfere and how can the mixing angle be calculated?

For two particles to interfere, you need them to have similar quantum numbers. For example, a $\rho^+$ could not interfere with the neutral $\phi$ or $\omega$, since the respective transition would violate charge.

What about the $\rho^0 =(u\bar{u}-d\bar{d})/\sqrt{2}$? It sure has a similar mass to the $ \omega=(u\bar{u}+d\bar{d})/\sqrt{2} $, since these two particles are composed of the same u,d quarks, in different arrangements, and it does not violate charge. But, as you point out, they are isotriplet and isosinglet respectively, so a transition between them would entail violation of isospin (and, related, G-parity), which is a pretty good symmetry in QCD/low-energy-physics.

At this point, you might go back to SU(3) singlet-octet mixing, and wonder how these states mix, since they violate (break) SU(3). That's just it: if the strange quark were as light as the u,d, SU(3) would be as good a symmetry as isospin, and, ipso facto, you would not have ideal $\omega-\phi$ mixing! But the strange quark is big-time heavier: look at the mass of the $\phi=s\bar{s}$, 240MeV bigger than that of the $\omega$. This is close to the QCD scale and so not ignorable. 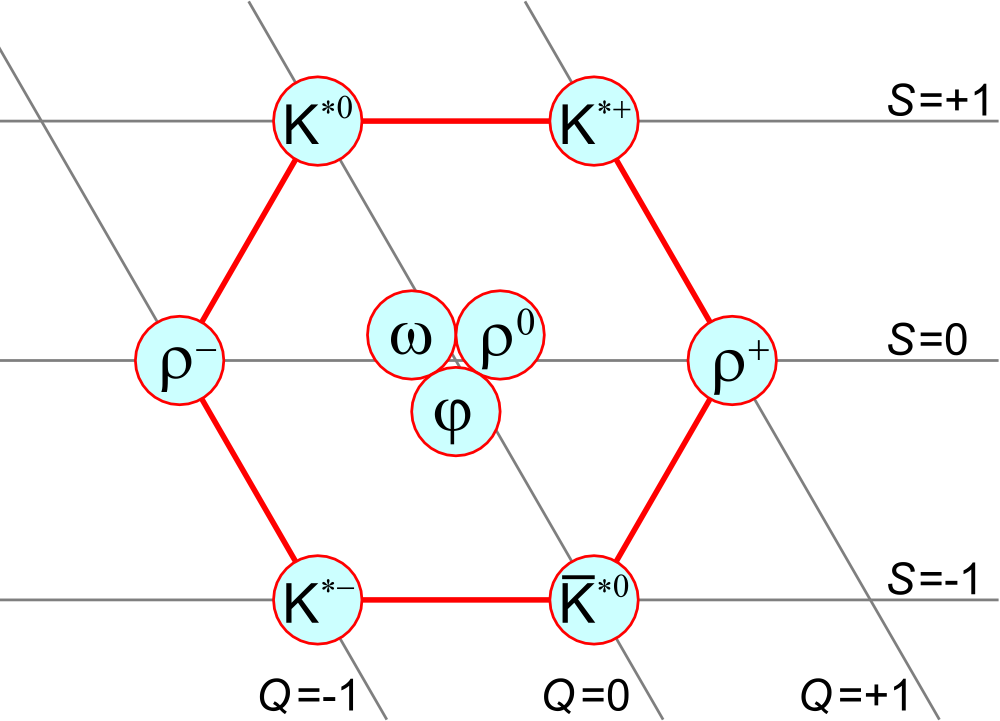 So, for the vector octet, you might as well look at the horizontals of the "stop sign" diagram and de-emphasize U and V spin... The different s masses have compromised the entire structure and resulted to ideal mixing--ideal breaking, that is!

Edit in response to question

The angle decreases to 38⁰, virtually ideal mixing, if one uses masses instead of their squares in the above formula, which now appears more sensible given the fact vector mesons are not chiral symmetry goldstons (only the pseudo scalar mesons are).

Not the answer you're looking for? Browse other questions tagged particle-physics standard-model quarks mesons or ask your own question.

4
String breaking in QCD
1
Pions as a superposition of quark states
2
Why can omega meson not decay into two charged pions?
1
The right quark combination for a meson
2
Why can't omega meson decay into two neutral pions?
5
How are the 'physical' isospin zero states determined?
2
Why do we regard ($e^{-}, \nu_{e}$) as a doublet?