I'm pretty sure the answer to the question in title is "No". But why?

Below is a naive Newtonian simulation I made. You can see that in the animation, both black hole's horizons seem to "recede" for a moment as the black holes pass each other. The black holes in the animation are NOT MERGING. Therefore any explanation involving merger and subsequent expansion of the new horizon does not cover this situation.

The color of the pixels describes escape velocity at a given point. Black pixels have the value higher than speed of light. 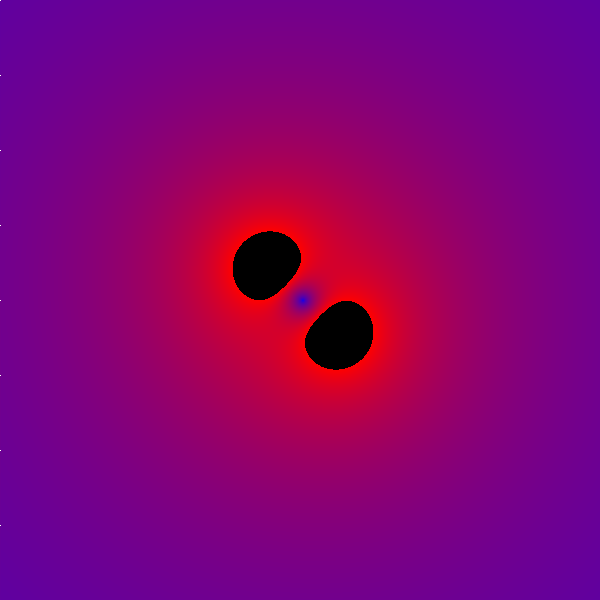 What am I illustrating here is, that if two black holes are too close to each other, their gravity must cancel out. Lagrangian point would appear somewhere in between. Yet we know that nothing should be allowed to escape. At the same time, quantum mechanics requires the surface of the black hole to be directly proportional to it's mass. Which is not the case in the simulation we see.

How does event horizon survive distortion caused by another black hole, when two black holes are extremely close to each other?

Their gravity would not at all 'cancel out'. For sure, there could be some point precisely between the two black holes where a test particle would remain in its place without being pulled in; however, this point would be very unstable and any fluctuation of the particle would immediately cause it to fall towards one of the black holes.

Of course, provided you have set up the black holes like in the picture, somewhere in the very near future the black holes would also start to sense each others presence and merge. This makes it even more impossible to have a particle accurately residing between the two black holes without falling in.

You seem to misunderstand a bit what it means to be "in a black hole." That is a short-hand way of saying inside the event horizon. The event horizon is really a surface in spacetime, not separately on each spatial slice. But if you do take a spatial slice through it to get a picture "like" your picture (taking into account that, as you understood, your picture is not correct in the details), your binary system will either be "merged" or "in-falling".

If merged, then the portion of event horizon on your slice will encompass both singularities and this "Lagrange point" in the center. In this case, if you found yourself at the special point between them, you might still be able to choose which of the two singularities you hit, but you will hit one of them eventually. You cannot escape that result. (Or, in a super-special case, they will both hit you simultaneously when they fall together.)

In the in-falling case, the portion of the event horizon on your slice will be disconnected, appearing like two distinct regions. If you're at the midpoint in that case, you might still escape - if you start soon enough to avoid the merger - by traveling perpendicular to the line connecting the holes for a while. There's no contradiction though because you were never in a black hole in this case. Gravity will attract the black holes toward each other in this case, so you better clear before they get close enough to you for the horizons to merge, trapping you in the case above.

The configuration in the question is a compound system for which the overall event horizon should be simulated numerically. Intuitively, as per Newtonian similarity, a first Lagrangian point should be on the line joining the two black holes in between them. If an object is in that point, it should maintain its position relative to them.

However it is not correct to say that the object can escape the black hole, as it should be outside the event horizon of the compound. I expect the event horizon of the system to be formed by two not connected surfaces, each of them surrounding one of the black holes and closer to the respective black hole in the spacetime region between them. In such a way that in the region in between there is a sort of corridor viable for time-like paths.

3
Can we exit the event horizon of merging black holes?

4
Frame dragging around a black hole
2
Information escape from a black hole
6
Binary black hole merger viewed from inside the event horizon
12
Can you have black holes in your black holes?
2
What is the criterion to say that two black holes merged?
2
Can the horizon of a black hole move?
2
What happens to light in the middle of a BH binary?