A question regarding the speed of light in a vacuum, specifically putting a 'color' in

I know that red and blue etc. lights are produced when 'white' light is put through mediums.

For instance, put two sources of light produces the right frequencies and , one blue and one red in a vacuum. Turn the sources on. How can red and blue still be 'red and blue' if they travel at the same speed? Or, are they NOT red and blue, they simple would go into the vacuum and become the same speed, and thus also not have 'color' (at least to our eyes)?

Also, can you please tell me why this is true?

Through the vacuum of space, no matter what their energy is, they always travel at the speed of light. It doesn't matter how quickly you chase after or run towards light, either; that speed you view it traveling at will always be the same. The thing that shifts, instead of its speed, will be the light's energy. Move towards light and it appears bluer, boosting it to higher energies. Move away from it and it appears redder, shifted to lower energies. But none of that, no matter how you move, how you make the light move, or how you change the energy, will cause the speed of light to change. The highest-energy photon and the lowest-energy photon ever observed both travel at exactly the same speed.

All that the color of light waves denotes (analogous to the pitch/tone in sound waves) is the wavelength/frequency of that light wave. You're confusing how many times the lightwave oscillates with how fast it travels and these are two very different things.

The second part of your question is a little bit more difficult to grasp. When you hop in your spaceship (or train) and try to catch that light wave, you're never going to be able to, no matter how fast you go. Even if you accelerate to 99.9999999999% the speed of light, the light wave will still appear to you to be traveling at 299 792 458 m/s, though the light's frequency would be greatly reduced from your perspective and so the light would appear to be shifted toward the red end of the spectrum. This effect is known as time dilation.

The highest energy photon and lowest energy photon both travel at the same velocity, but they will have, by definition, very different wavelengths/frequencies. From radio waves to gamma rays and everything in between, electromagnetic waves will always propagate at 299 792 458 m/s.

Edit: I apologize, I totally missed your initial reference to splitting white light using a medium. I assume this was a reference to a prism. This splitting occurs, as I understand it, because of the change in the speed of light between the vacuum and the medium of the prism. This change in speed (the difference between the refractive indexes of the two mediums involved) causes a change in the direction of the wave. Since "the refractive index of many materials (such as glass) varies with the wavelength or color of the light", the white light is dispersed.

I have learned that all light in a vacuum, all electromagnetic waves, travel at the same speed in a vacuum.

Yes, that is exactly right.

But, the blue light is traveling at a different speed to begin with, no? How is it exactly that red and blue light change speed in a vacuum to be the same and still be red and blue?

No, it isn't. The color of (monochromatic) light is directly determined by the frequency $f$ of the light, i.e. how many oscillations the light performs (at a fixed point in space) in a unit time interval. This is related to the wavelength $\lambda$ of the light via $$ \lambda = v \times f, $$ where $v$ is the (phase) velocity of light. If the light is propagating in vacuum, then $v=c=299\,792\,458\:\rm m/s$ is a fixed velocity, and it is the same for all frequencies and all wavelengths. If the light is propagating in a medium (say, glass), then the phase velocity will generally be slower than $c$ and it will depend on the frequency.

As for the quote at the end of your post, it is due to relativistic effects. If you want a deeper explanation, you should ask it separately.

This is a partial answer complementary to the other ones, for clarifying the term color.

I know that red and blue etc. lights are produced when 'white' light is put through mediums.

It has to be clear that "color" has two definitions, which overlap in specific instances.

Color is a word in the language describing the different ways visible light is seen by the human eye, the perception of color.

Physicists associate color with the frequency of light in the visible seen in the rainbow, or through a diffraction of a beam through crystal. 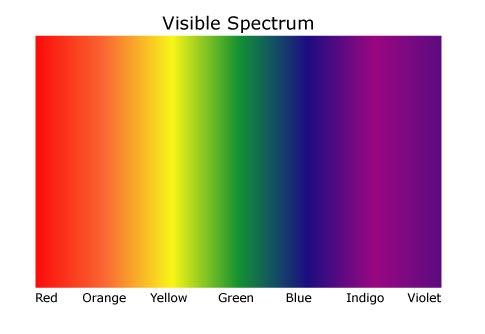 The rainbow colors have a one to one correspondence with a frequency, as seen in the first link.

The perceived by human eyes colors depend on the biology of the retina of the eye, and there is , in addition, a many (frequencies) to one (color) correspondence.

White is not a color of the rainbow, it is what we call a particular mix of frequencies ( from the electromagnetic spectrum in the first link) that our eyes define as white. 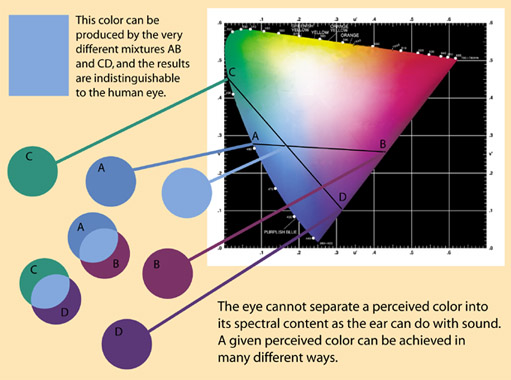 If you are interested you should go to the links I have given and try to understand the complexity of defining color as seen by the eye and color associated with a specific frequency.

Not the answer you're looking for? Browse other questions tagged special-relativity visible-light speed-of-light frequency dispersion or ask your own question.

0
Why does purple appear in a rainbow?