Why do reflections on a rough surface stretch from the light source towards you instead of spreading out in all directions? [duplicate] 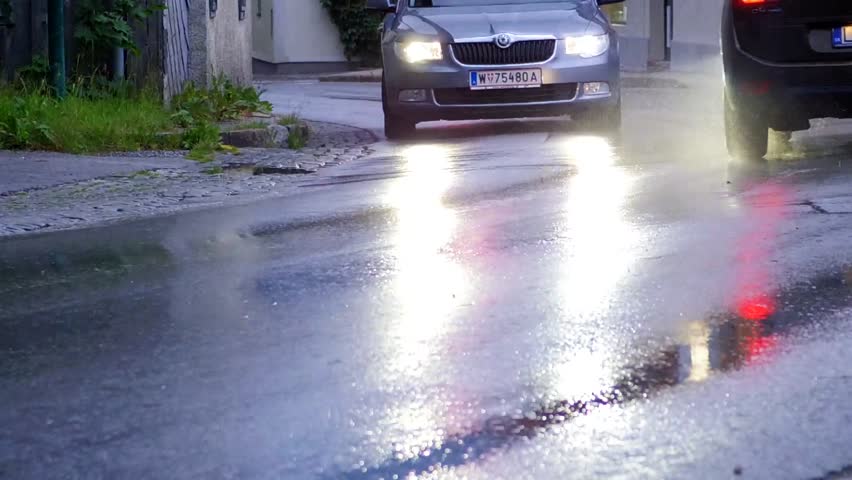 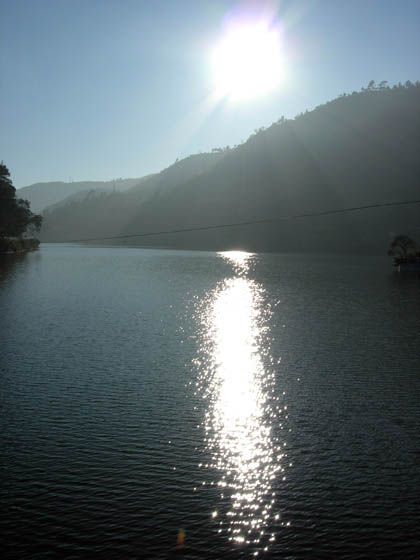 Let's take the sun example. Say the sun is 10 degrees above the horizon and directly to your west. Think of the surface of the water as a bunch of little tiny mirrors. The equilibrium position of these mirrors is horizontal, but when disturbed they can rotate about either of two axes: east-west or north-south. I'll call east-west longitudinal (rotating around an axis in the plane of you and the sun) and north-south transverse. In order to see spreading vertically, you need transverse rotations, and in order to see spreading horizontally, you need longitudinal ones. The question is, how big do the rotations have to be to create a given amount of spreading?

Consider the transverse rotation first: when the surface is undisturbed, you only see the sun when you look down at an angle of 10 degrees. Let's say you see the sun everywhere from 5 to 15 degrees down. For a ray coming from the sun at a 10 degree downward angle, that would require a rotation about the transverse axis of 2.5 degrees toward you to achieve the 5-degree ray, or 2.5 degrees away from you to achieve the 15-degree ray.

Now, how much much rotation about the longitudinal axis would be required to see an equal amount of horizontal spreading? If you see the sun when you look at a 10 degree downward angle, 5 degrees to the north (say) of west, that means the ray is being reflected through 20 degrees vertically (comes from the sun going down at 10 degrees, enters your eye going up at 10 degrees) and through 5 degrees horizontally (comes from the sun going east, enters your eye going 5 degrees south of east). Since there is $1/4$ as large a change in direction horizontally as vertically, the angle the mirror must be rotated through is $\arctan(1/4)$, or about 14 degrees to the south. Thus to get 5 degrees of horizontal smearing, you need surface fluctuations more than 5 times larger than to get 5 degrees of vertical smearing.

You can quickly convince yourself of this effect with a small mirror (or the surface of your phone). Hold it horizontally and look at the reflection of something in the distance (or close by if you like, just not at a high upward angle), and notice how much more pronounced the movement of the image is for rotations about the transverse axis than the longitudinal one.

In this first diagram, it assumes that the surface is perfectly smooth and the light is being reflected uniformly along the entire surface. This is (approximately) the case for mirrors and polished floors and areas of water.

A fancy way to describe this is to state that the normal incidence of the surface is consistent throughout the reflective surface (in this case "up" toward the top of the image).

In this second diagram, instead of reflecting uniformly the light is being scattered due to the uneven surface at a range of different angles. Here we show the scattering in two dimensions but of course it will be happening in at least three. Note that in this case the "normal angle" is inconsistent due to it being an uneven surface.

In this case, some of the light is reaching the observer and it is being seen at a wider range of points along the reflective surface. A typical example of this is uneven surfaces of water as shown within the question. In particular, note that the image is distorted/stretched/irregular in these cases (due to the distorted surface it is being reflected from).

EDIT: To address the updated question, note that the reflections ARE being scattered in all directions. The catch is that we can only PERCEIVE them in approximately the general direction of the source and the receiver. This can be seen somewhat in the car headlights example within the question - note that it appears to wobble somewhat.

What will vary is the angles to which the reflections occur. "Most" will continue in roughly a straight line, while few (the minority) will go off at a significant angle AND return to the observer at an equally significant angle (but ~opposite in specific plane(s)). This means that the image will be at its most intense when the source/reflector/observer are all approximately in a straight line. In isolation this might be fine, but of course in those "other" directions are other emitters of light which will be more intense than the dim images being weakly reflected at relatively huge angles.

Also note that where an image is being projected onto a wall, the wall is scattering the light back in all directions - thus allowing anybody in any part of a room to view the image being projected onto the wall regardless of their position/height relative to the projector source. Here the projector source must project a sufficiently intense and clear image to be seen at a range of angles as opposed to vaguely illuminating the surface.

Because the normal vector must be between the incident and reflected rays.

In other words, the incident and reflected rays must be on opposite sides of the normal vector. Because the surface is rough, the actual normal vector lies mostly in a conical range, with the vertex at the point of reflection and perpendicular to the macroscopic surface. This is represented in the diagrams below as a purple cone.

Analysis of the height versus depth plane

Three possible light paths are shown (red, green, and blue). Each light path has a reflection point, from which a purple cone of possible normals is plotted. Notice how all three of the paths have the normal cone in between the incident and the reflected rays. Furthermore, one could draw a normal vector that makes the angle of incidence equal the angle of reflection, which would also be in the purple cone. Thus, each of these light paths are plausible. 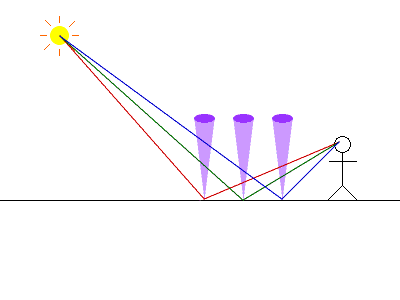 Analysis of the height versus width plane

The green (middle) path is a reasonable path for reflection. If you keep in mind that this is a 3-D path, there is a plausible normal that is both between the incident and reflected rays, and inside the purple cone.

On the other hand, the red and blue paths clearly do not have the purple cone between the incident and reflected rays. Therefore, these are not plausible paths for reflection. 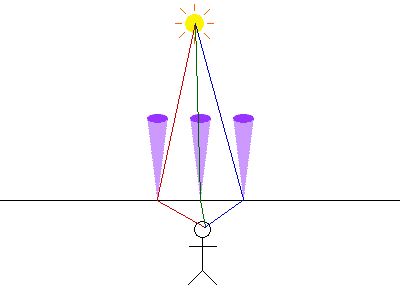 Think of the situation in a spherical cooridnate system, with the point of reflection in the water surface at origin and the $z$-axis parallel to the still water surface and pointing in the azimuthal direction of the sun.

As the sun gets lower, both the incoming and reflected light rays becomes closer to parallel to the $z$-axis. Imagine rotating the water surface by small amounts in the $\theta$ and $\varphi$ directions respectively and think of the effects that has on the direction of the reflected light.

As the light rays get closer to parallel to the $z$-axis, the effects of rotations in the $\varphi$ direction have smaller and smaller effects on the direction of the reflected light. In the extreme case of the sun at the horizon, rotations in $\varphi$ have no effect at all. This is because all values of $\varphi$ represent the same point for $\theta=0$ and $\theta=\pi$.

I find it's helpful to think about this in a spherical coordinate system: 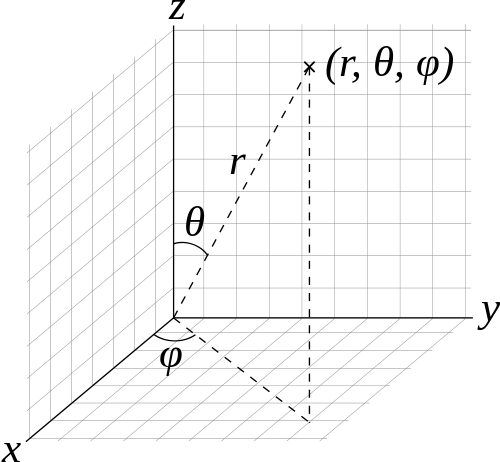 It's basically pointing in the $x$ direction, except for small variations due to waves represented by $\delta\theta_n$ and $\delta\varphi_n$. The second vector is pointing towards the incoming sun light:

and the third is pointing in the direction of the reflected light:

Due to the law of reflection, we get the following relations between the angles:

In order to see the magnitude of influence of the small changes in the orientation of the reflecting surface ($\delta\theta_n$ and $\delta\varphi_n$) on the direction of the reflected light, we can use the formula for infinitesimal displacements in spherical coordinate systems:

Since $\theta_i$ is basically the elevation angle of the sun, this means that as the sun gets closer to the horizon ($\theta_i = 0$), the surface variations in one direction starts to get heavily attenuated, while in the other direction the amplification factor of $2$ remains constant.

Because the surface isn't completely smooth the light is bounced back to you at different points. If the surface was totally smooth (like a mirror) you would see a reflection that is not stretched out!

It is because light reflects off of the whole distance on the ground (or water) along to you where the angle is working so that light bounces into your eyes (or the camera).

It is not stretched out, it is that light hits everything from the Sun (in this picture it is Sunlight), and you only see along the line to be reflected that has an angle of reflection that bounces off the photons in the camera.

Not the answer you're looking for? Browse other questions tagged optics visible-light everyday-life reflection or ask your own question.

21
Why does sunset over a body of water cause a path of light stretching towards the horizon?

27
How are photons “consumed”?
0
Can we see everything?
3
Brewster angle no reflection
3
Do curved displays flip their images?
2
How does light actually interact with different materials? - PBR
1
What is the difference between horizontally/vertically polarized light and s/p polarized light?
2
Where does laser reflection (1) come from?
0
Do polarizers also shift the phase of light?
0
Color dispersion at the edge of a slanted mirror