Difficulty in understanding an optics question

So here's the question:-

Please could someone explain the meaning (I am not asking for an answer) as this question seems quite ambiguous.

This question is about thin film reflection - which wavelengths would reflect better at certain incidences for certain film thickness, which is normally in the same range as the wavelengths.

Is the wikipedia article for this one and related things.

It requires you to calculate the new wavelength in the film, realize that light reflects both on top of the film and after a reflection under the film, and then figure out at which wavelengths you have a harmonic. You'll see far stronger reflection for the harmonics.

This effect is often used in highly reflector mirrors - for example, lasers classically have an optical resonator, which is then created by two mirrors that use multiple thin layers to create a harmonic for the wavelength of the laser.

More specifically, taking this image from the above-mentioned wikipedia page: 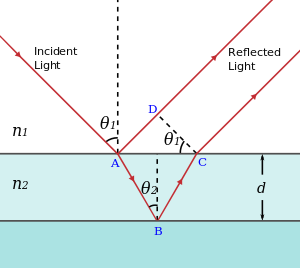 Not the answer you're looking for? Browse other questions tagged homework-and-exercises optics refraction geometric-optics or ask your own question.